The Virginia Amateur celebrated its 100th anniversary a year late because of the COVID 19 pandemic, but celebrate it finally did, with ceremony and gratitude and customary strong performances, commencing Thursday, March 25, at Cutawhiskey Farm, now its permanent home, devised to it by Aubrey F. Morgan, DVM, its longtime and devoted president on his death on August 23, 2020.

Traditions were observed, including six-hour running days, home-cooked meals for all, and outstanding judges from afar, John Russell, PhD, Professor and Department Head of Environmental Science at Kentucky Western University Emeritus, and John D. Milton, former AFTCA President. Both have judged widely, and John Russell served two decades as chairman of the Quail Championship Invitational. Significantly, both have trained and handled their own all-age dogs.

Jim Jones of Gloucester, Va., stepped in for the 30-minute Open Derby. Jim has judged many trials all over the country and previously raised, trained and campaigned on the amateur circuit.

The trial celebrated Aubrey's memory and ideals which this club carries on, including hospitality, fair play and courtesy, and the love of a true all-age dog. Many stories of Aubrey were shared, and your scribe was treated with Barbel Fetkoter's telling as she expertly chauffeured me every brace through the mud in a Kawasaki Mule. This time with Barbel was magic as she recounted events in her five decades working as Aubrey's veterinary technician and field trialing partner. "I love field trials," Barbel said during our final round, with deep joy and sincerity. She now runs the bird program at Cutawhiskey, as well as laboring long and hard on physical improvements as she and Aubrey did through the decades.

While temperatures were warmer than ideal the rains held off until the last brace had run Sunday when the heavens opened, accompanied by thunder and lightning. 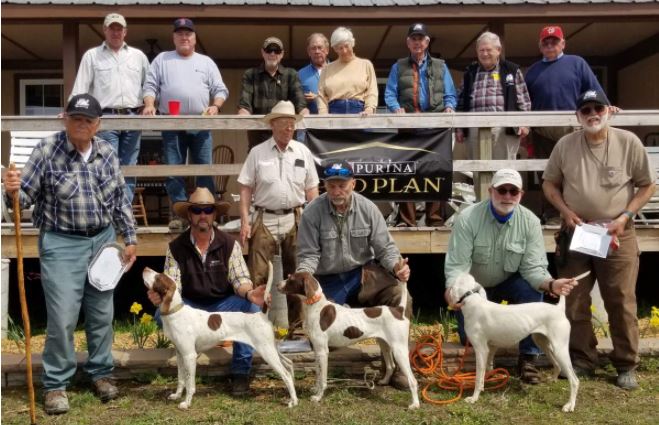 Next came the Parke Brinkley Amateur Derby Classic with eight entries, won by Mohawk Mill Bad Boy for Gary Winall with a big forward race, a find at 14 and an unproductive at 25; second by Warrior's Debutante for Gene Hogge with a dandy find at 25 and a strong race; and third by Mohawk Mill Big Stuff for Winall with a find at 10 and well patterned race. 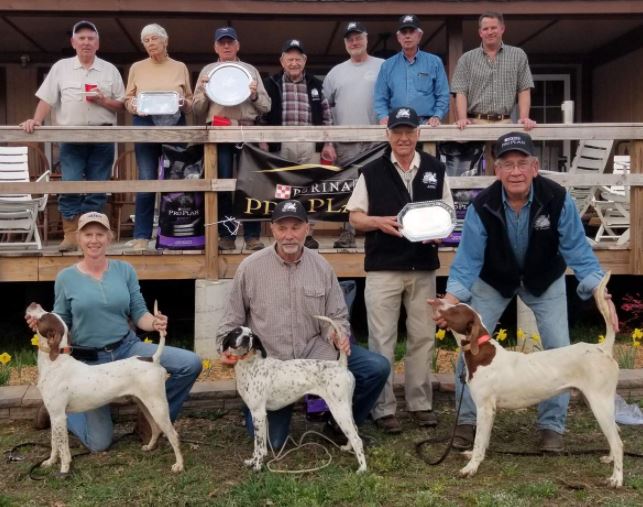 The signature one-hour Virginia Amateur All-Age Classic, in early years described as second only to the National Amateur Quail Championship in prestige, drew twenty. It commenced with excitement as I'm Alley Cat, setter female, handled by Tom Brigman for ailing Sammy Giddens who owns Cat with wife Nida and A. Q. (Skip) Brown, ran a wide-flung race and found birds at 26 in woods and at 59 at end of a big finishing cast to capture third. Cat's breeder Gary Ansell was also on hand to cheer. 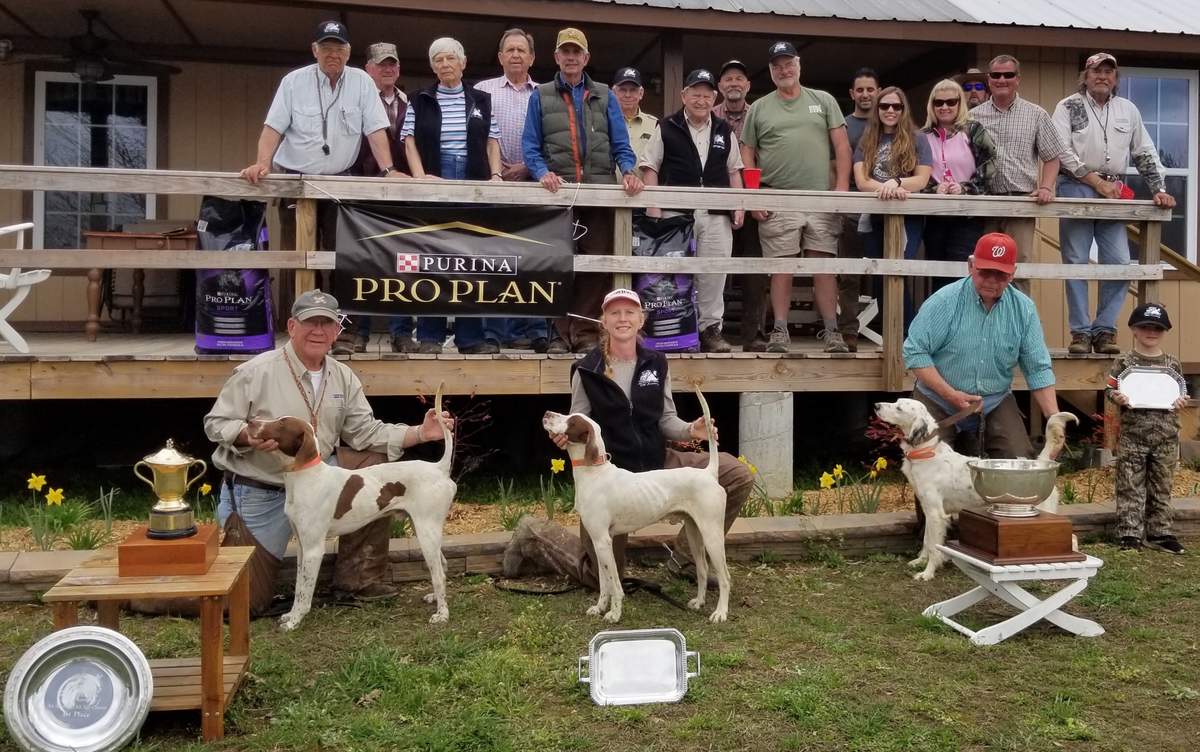 Second was won by first-year Mohawk Mill Good Advice for Winall with finds at 15, 37 and 57 where the judges spotted him pointed near Aubrey Morgan's grave. His race was reaching and independent and bird work picturesque.

First was captured by Mohawk Mill Trail Warrior with a wide, forward race and finds at 11, 17 and 33 on which he was statuesque. He finished in distant piney woods.

L F Dialing Samantha scored five times and covered lots of country for Larry King and Mohawk Mill Image ran a picture perfect race, but birds were not to be located by him during the hour.

Sunday morning began with the threat of rain all day, finally at the end of the day the threat was over and the skies opened up and the rains came down, the roll of thunder and the crack of lighting lit the skies. We were all glad to get through the trial.

The Open Derby with five entries was won by Lefever, pointer male, for Gary Miller. Lefever had a wide ranging race and two good finds. Second went to Mohawk Mill Bad Boy for Gary Winall. Bad Boy had two well placed finds and one unproductive with a very forward and determined race. Third went to Mohawk Mill Big Stuff for Gary Winall. Big Stuff had one unproductive a very nice find where he stood bold to the flush. His race was not as extreme as the first and second place dogs.

The thirty-minute Open All-Age (eight entries) was won by Tommy Brigman with Harbor City Crusher, pointer male. Crusher had two well placed finds, an unproductive and a strong forward race. Second went to Mohawk Mill Good Advice with a find on a kill, a find with a slight mark of flight and a third find at pick up. Third went to Full Effect, pointer female, for Larry King. Full Effect had a find on a kill, a find straight to the front on course and a nice finish.

The Association thanks Purina and especially its representative, Greg Blair, who helped design the One Hundred Anniversary logo and suppled hats and vests for judges and reporters, hats for all participants, banners, pens and other help with finances. Special thanks also goes to Barbel Fetkoter for chauffeuring the reporter in her Kawasaki Mule and many dishes of good food cooked for all, as well as her work with the bird program at Cutawhiskey. Barbel is a dedicated worker year-round for the Association.

Skip Brown is thanked for driving the dog wagon or making sure it was accomplished, and Gene Hogge for taking care of the birds and planting or having them planted. J. Parke Brinkley for his cooking and all the participants are thanked for their entries and attendance. 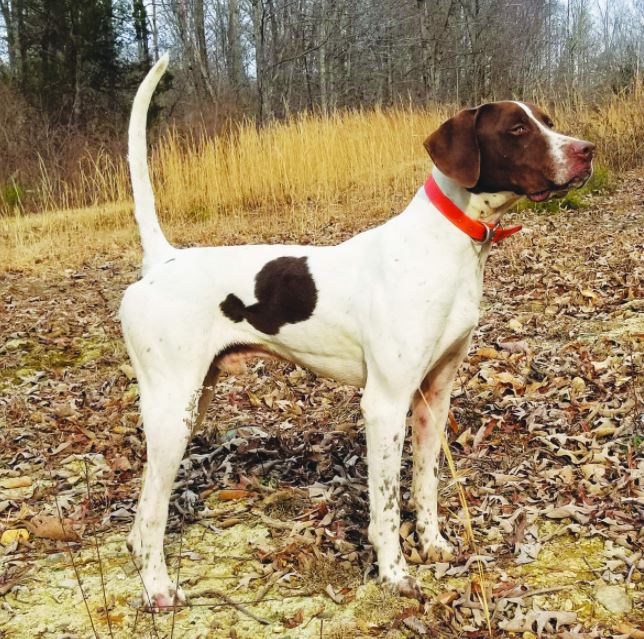