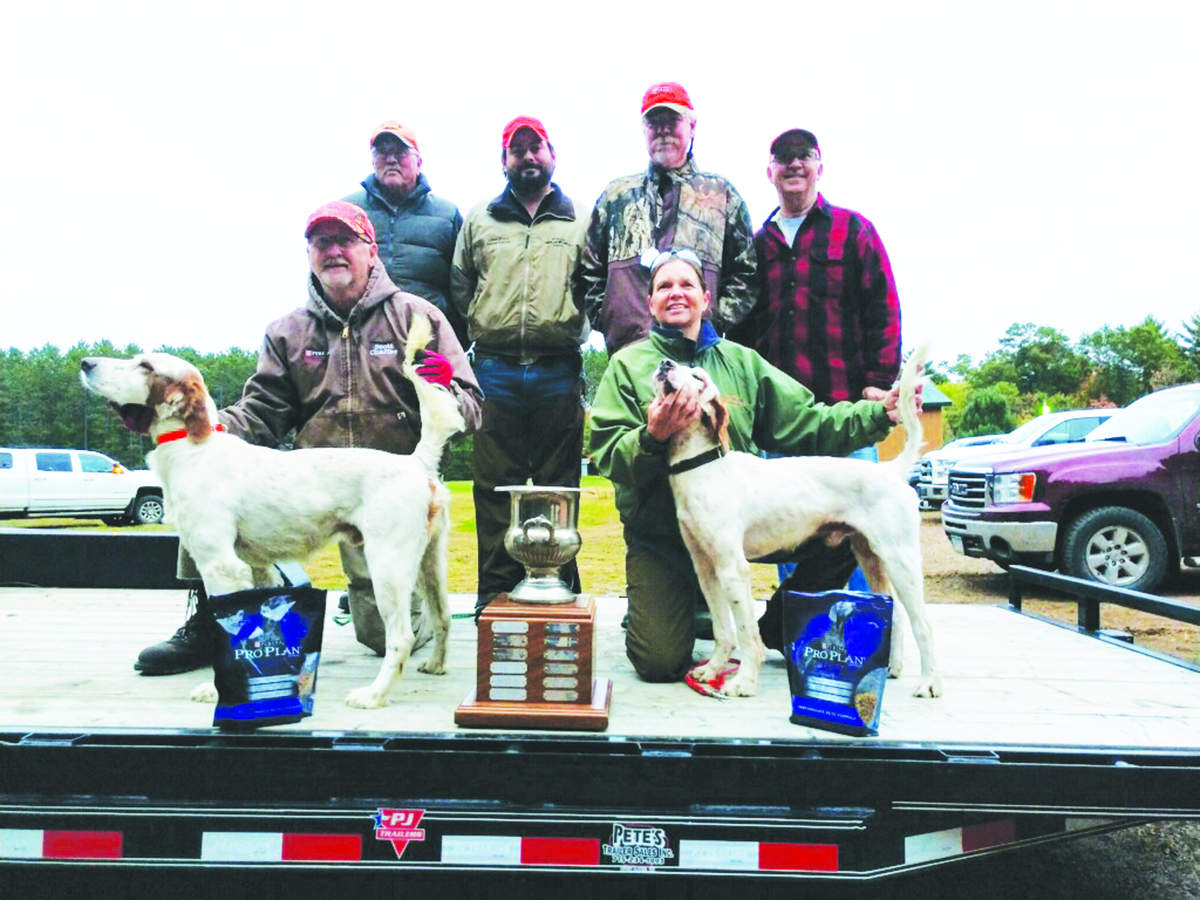 AUGUSTA, WIS. -- The first weekend in October has traditionally marked the running of the Wisconsin Cover Dog Championship in the Eau Claire County Forest.

This trial has always boasted a great mixed entry of professionally handled dogs, and amateurs from the Midwest and beyond. This year was no exception.

The Chippewa Valley Grouse Dog Club of Wisconsin is light on membership, but very heavy on its dedication to providing a wild bird trial for pointing dog handlers and enthusiasts.

Considerable effort is needed to prepare for a wild bird championship. First priority of the summer is to prune and cut six or seven courses that go about 20 miles through swamps, thickets, forests, and hills. This work is not glorious, but is very important to provide a quality and equal venue for participants.

Then, as October approaches, the pre-game show is necessary to take entries, conduct the drawing, organize the lunch lineup, keep tabs on course and road conditions, etc. Brent Sittlow, Rod Lein, and Roger King assisted with these necessities.

When game day arrives, volunteers are needed to fill the role of marshalling, vehicle moves, lunch line, etc. All of the field trial entrants were quick to respond to keep the proceedings on schedule. Extra thanks to Brent Sittlow, Tim Callahan, and Roger King for wrangling up some lunch grub for the trial each day.

Additional support of this Championship was provided by Purina in the form of sponsorship and dog food. The CVGDA and the entire cover dog circuit is fortunate to have Purina out front and supporting our sport with quality food and financial support. It would be very difficult to find a better product and better company reps to deal with than Purina. Thank you!

It was a pleasure to have Carl McRae and James Kleve to look over this Championship, and judge the performances. Carl is a dedicated field trialer from Michigan that is consummately involved in some way, shape or form with the Beaverton and Lake States Clubs at Gladwin. James is a successful young professional who trains and breeds pointers and setters under the Out Cast Kennel banner. He spends part of his schedule in Kentucky and the rest of his time in the upper Midwest.

West Central Wisconsin has been in a very moist weather pattern, to say the least. It seems as if the last four or five early October championships have been excessively wet and green. Above average rainfall again in 2019 had the water tables high. Then, days before the trial, another heavy dose of precipitation made for even more havoc.

The first day of the trial we were able to make use of six courses. The flood waters rose by the second day, and the decision was made to whittle down to four useable courses. To complicate things further, a pending timber sale was started on a course that was planned for use. We appreciate the understanding of all participants on the extenuating circumstances that were largely out of anyone's control.

And so it goes, with wild bird field trials; predictably unpredictable.

Gunner was drawn to run on the sixth brace of day No. 1. The temperature was dropping on the last brace of the day, and rain was steady for the whole 60 minutes on the Stokely Diablo Jake Course. Gunner attacked the course with a forward and steady race ringing a wet muffled bell. His handler was able to stay with him through the first thirty minutes as we crossed the King property and headed toward Knight's Pool. His race strengthened as he searched ahead for birds. At 45 bracemate Brushville Burton Spencer (Waite) went quiet on course left along the river edge, which resulted in a grouse put to flight. A minute later Gunner made his move to the right of the course, away from the river, and stopped neatly. Two different grouse were put to flight in front of the strapping setter. His finish was strong and he held his rank for the remainder of the trial.

Will also ran on day No. 1, just before the afternoon rain started, on the Horse Creek Course. Will is a delight to watch. Not extreme, but attractively hunting every step. Will handled four evenly spaced woodcock with expert manners, and style to burn.

Other contestants that the judges were in favor of, in no particular order, were; Diva Dot (Lein) with two nice finds.

Titanium's Hammer (Minard) had a nice grouse find that put him into the conversation, and Snyder's Pioneer Scout (Chaffee) had an animated race and multiple woodcock.

Another rainstorm swept through Wisconsin on the last day of the trial. A good inch or more of rain fell the morning of the Derby and continued throughout the running. Nine contestants went back and forth a newly cut course near Wilson Park. As bad as the weather conditions were, the stake was quite memorable with really good performances.

Taking first place was well-built pointer male Hifive's Power Line (Minard) which punctuated a hard searching race with a beautiful grouse find. Placed second was Northwoods Setter Tech Ringo (Jeff Forsberg) which was strong, attractive and forward, with the perfect amount of handle. Third place went to Tupelo Honey (Wheelock) that ran solo in the last brace. Tupelo was steadily searching in the pocket for her thirty minutes and had a quality woodcock find in likely cover at the halfway point.