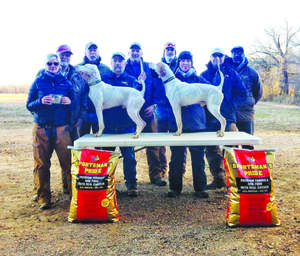 Cajun Classic Winners. From left: Piper Huffman, Larry Huffman, Judge Virgil Moore, Nick Thompson with Whippoorwill Mayhem, Ric Peterson, Bubba Spencer, Tiffany Genre with Touch's Adams County, Randy Anderson and Judge Adrian Jackson.
HICKORY VALLEY, TENN. -- The Cajun Open All-Age Classic began as the Solatex field trial in the late 1970s. Jerry Bacua, Charlie Morrisey and Louis Wilson were the founding members of the Solatex Field Trial Club and hosted the first trials. The trial was held on George Clark's training grounds in DeRidder, La. Gerald Roberts was instrumental in renaming the trial the Cajun Classic. He moved it to the Greene Ranch in Amite, La. Ed Husser, who won the National Championship with Brush Country Spectre (1994), trained on the Greene Ranch. When the Greene Ranch was lost, John Holland and Cecil Rester continued the trial by moving it to the Black Prairie Wildlife Management area in Columbus, Miss. In 2016 the trial was held by Will Dunn at the M. Barnett Lawley Forever Wild Field Trial Area in Greensboro, Ala., also referred to as the Cattle Ranch.

The Cajun Open All-Age Classic was held by its new sponsor, Ric Peterson, on January 28, 2019 followed by the Cajun Evangeline Derby at its new location in Hickory Valley, Tenn. In an era when our sport is losing grounds, adding new grounds is truly something to be excited about. The grounds are just 20 minutes north of Ames Plantation in the heart of the West Tennessee field trial circuit. The landowners of these beautiful grounds are Ric Peterson, Conrad Powers, Heritage Plantation and Calvin Elder. We are very grateful to all of the landowners for allowing us to use their land for this field trial.

Three courses were laid out on approximately 2500 acres. Next year the courses will cover an additional 1000 acres. A crossing was planned to gain access to the additional 1000 acres, but due to excessive rain this crossing was unable to be completed before the trial. These grounds are also home to the Wolf River Amateur Field Trial Club which held its trial here for the first time last spring. The grounds consist of large agricultural fields and some piney woods. Large is probably an understatement; if edges are what you are looking for this is the place. The fields are wide open, and the edges require a confident and driven dog. Handlers and scouts faced the challenges of learning new grounds and courses. Birds were released in the fall, and additional birds were released prior to the trial. Several large good flying coveys were pointed in the All-Age and Derby Stakes.

Virgil Moore of Canyon, Tex., and Adrian Jackson of Boys Ranch, Tex., were the judges for the trial. Virgil is the owner of Mule Creek Kennels and a successful open shooting dog handler. Adrian Jackson is employed by Boys Ranch and has trained dogs for over 20 years. He has successfully competed in AKC, ABHA, NBHA and American Field trials. Both judges rode in freezing and windy conditions watching each and every dog very closely.

Amy and Bubba Spencer and Ric Peterson did an excellent job hosting the trial. Bubba Spencer and Ric Peterson marshalled and kept everyone on course. Amy Spencer drove the dog wagon, reported, and did anything else that needed to be done during the trial. Betty Shearouse reported the trial and, due to illness, was only able to ride the first and third days of the trial. Amy stepped up and took excellent notes on the second day. Chris Sellers and his wife, Cynthia, prepared the delicious lunches each day and prepared dinners for the judges. Amy had plenty of snacks and cookies on the dog wagon. Squeaky Powell watched for the dogs on Mt. Comfort Road and slowed traffic to ensure the dogs' safety and ours. Many thanks to Vera Courtney who provided the much needed coffee and took photographs of the trial. We would also like to thank Brad Kennedy and Sportsman's Pride for sponsoring the trial and all they do for our sport.

The equipment shed was the breakaway for the third hour. Coldwater Thunder (Hurdle) had a find at 25 in the edge of the terraced field with a strong finish. Valiant (Anderson) had a find at 7 and was unable to catch the front after getting out of pocket at 45.

Erin's Calvin Klein had a rabbit at 30 in the plum thicket below the barn and a find at 33 in the row of cedars past the barn with a strong forward race to secure his second place finish. Hendrix's Touchup (Burke Hendrix) had a find at 25 on the side of the sage grass field with a strong race.

Whippoorwill Mayhem (Huffman) was focused on birds with finds at 21 in the tri-corner, at 24 in the terraced field and in the long bottom at 45. Quickmarksman's Dan (Mike Hester) was picked up for failure to back Mayhem's second find.

The temperature dropped drastically overnight. When the second morning started, it was 20 with a wind chill of 8 . These conditions took their toll on the dogs, handlers and horses. Touch's Fire Away (Anderson) was picked up for an infraction on game at 39. Beast Mode (Burl Hicks) had a solid race with no finds.

Lone Tree's Rod Iron (Hester) and Hush Money (Anderson) were picked up at 17.

Quickmarksman's Tom Tekoa (Hester) and Touch's Blackout were picked up at 43.

Lester's Jazz Man (Anderson) was picked up at 10. Las Animas Fancy (Huffman) was lost at 45.

The Open Derby was held on Wednesday with a delayed start of an hour. It was 24 and windy when we turned the first brace loose. The field consisted of 26 Derbies but several were scratched due to handler illness and other reasons. Twenty Derbies came to the line. The Derbies had five finds and several had very strong races with no bird work.

Cocklebur King Tut, handled by Bubba Spencer, placed first with a nice forward race, an unproductive at 8 and two of the five finds at 14 and 19 in the terraced field. S F Fullcolor, handled by Larry Smith, placed second with a nice find at 5. Miller's Hot Rod, handled by Randy Anderson, had a find at 9 and a strong finish to secure third place. 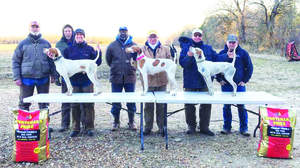