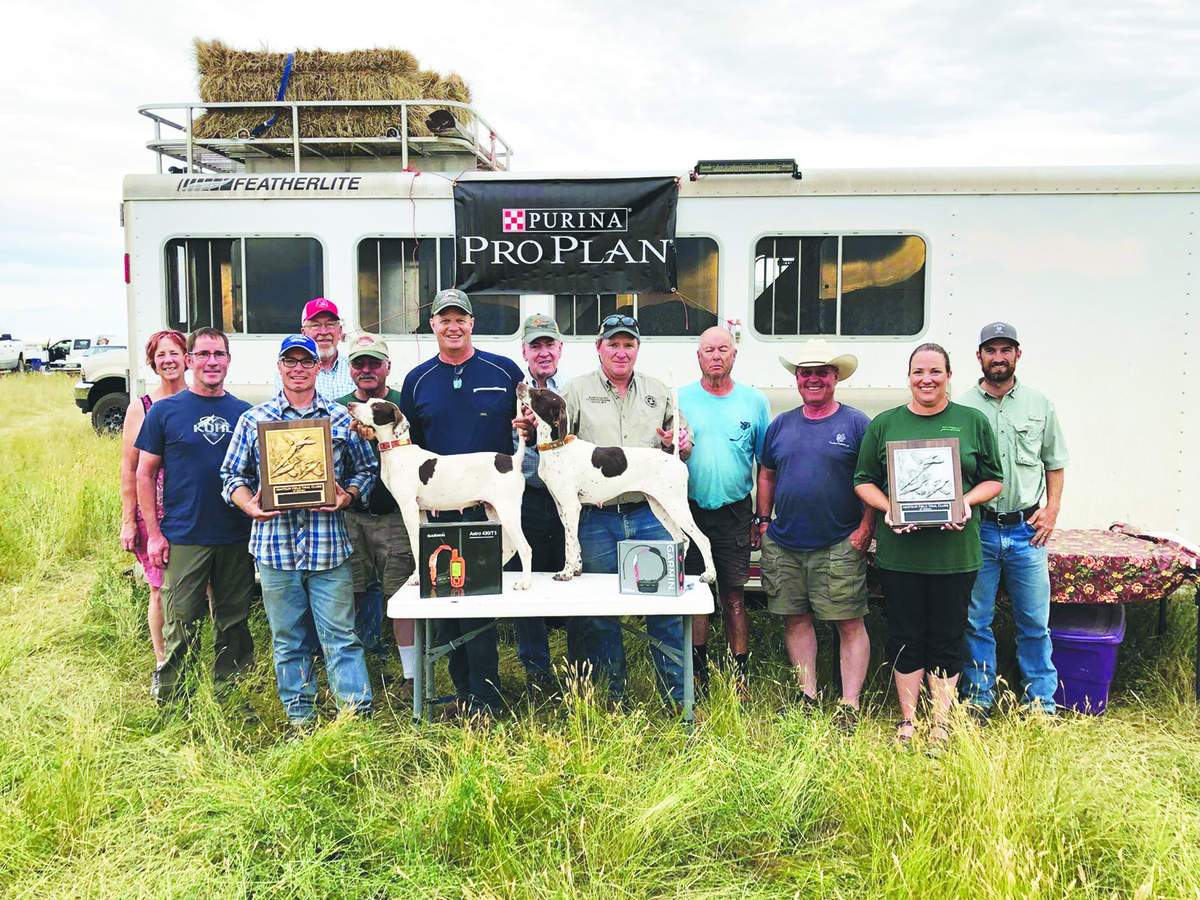 The cover was about the most ideal cover one could ever hope to run in this year. Tall and thick enough to easily hold birds but thin and short enough for dogs to run and show easily.

The bird numbers had rebounded well from the previous two years, even though the adjoining crops were still in the fields. Little to no CRP had been cut on any of the courses.

The club was fortunate to secure the services of Alex Mauck of Sandy, Ore., and Eric Mauck Boring, Ore., for the judicial positions. The two brothers have a wealth of knowledge and experience training and campaigning all-age setters. They rode evenly and attentively for all participants. Their decisions were well received.

Many club members put in a lot of effort to make this trial happen, none so much as Glenn Conover who arrived early and stayed until the end. He was there first getting the dog wagon ready for service and getting water available on the courses as well as camp.

Many others pitched in: Shawn Abbott, David Huffine, Pat and Marilyn Lockhart, Doug and Lillian Favor, and Michelle and Austin Turley. My apologies to anyone I might have forgotten to mention, but the efforts of all were much appreciated.

Alex and Bryanna Rickert, owners of last year's winner Touch's Hail Stone, along with Purina, sponsored a barbecue dinner on the grounds. Dinner was delicious and appreciated.

The numerous landowners who make the trial possible were as generous in their hospitality as always. We can not thank them enough for their stewardship of the land and their generosity toward us.

Named champion was Upfront's Southern Star, four-year-old white and liver ticked pointer female owned and handled by Lance Schulz of Bismarck, N. D. "Roo" is no stranger to the winners' circle. She is in the string of Shawn Kinkelaar. Roo finished fifth in last year's Purina Shooting Dog of the Year standings with two championship wins, one runner-up in a championship and a classic placement.

This was runner-up Emmalita's first championship placement for owner Austin Turley. "Emma" is carrying on for her aunt Railita which won this title in 2012. Emmalita, three-year-old white and liver pointer female, has one previous open Purina points trial win to her record, that being the Sharptail Classic (43 entries).

The opening brace of the trial paired Tucalota's Rebel Rush (Ed Mayhew) and Ridge Creek Lou (Larry Brutger). Breaking away on course No. 1, Rush was forward and along the wheat field CRP edge. Lou showed at the dry creek crossing. At 26 heading south along the east edge of the CRP point was called for Lou. Handler was unable to produce anything on initial flushing attempt and upon release for relocation Lou headed to catch the front with Rush. At 37 both dogs were forward at the first set of treerows. At 51, starting the second set of treerows, neither dog was forward. Both dogs finished forward between the second and third treerows.

Rebellita (Turley) and Perkins Trace Of Snow (Chris Perkins) were released in the cow pasture. Moments into the brace Snow was credited with a stop to flush. At 4 point was called for Rebellita with Snow backing. No birds were produced during initial flushing attempt nor relocation. Rebellita was charged with an unproductive. Birds were ridden up as the gallery left the area. At 8 point was called by both handlers, birds produced, all in order. At 15 after crossing the downed wire point was called for Rebellita. While handler and judiciary were riding to the find Snow came into the area with the horses and had a divided find. Birds were produced, all in order for both dogs. A good limb find for Rebellita. Heading west toward the air strip both dogs were well forward and showing nicely. At 30 heading south after the wind sock point was called for Rebellita with Snow coming in for the back. While riding to the dogs, Rebellita corrected and moved up. Snow moved up and both dogs stopped for a divided find. Birds produced, all in order. At 49 Rebellita stopped near the handler and the gallery. Handler encouraged her on and a bird popped in the area ending what had been a strong run. Snow continued on finishing forward.

Seekin A Thrill (Ross Leonard) and Crazy Mountain Buck (David Huffine) started out heading east, just south of the apple orchard. Both dogs started out well. Turning north toward the old hay pile, Buck was forward but at a moderate range. Thrill was being looked for.

R C's Bobtail (Mike Mathews) and Tucalota Blew (Mayhew) were paired together for the first brace of the afternoon. Both dogs handled well. At 15 point was called for Blew but he corrected and moved on before handler's arrival. At 25 Mathews called point for Bob along the east fenceline, nothing produced. At 40 Blew had a clean stop to flush along the dry wash. Both dogs finished forward on the treerows.

I Got This (Doug Favor) and Erin's Wild Rum (Mark Johnson) broke away heading south through the hills. Both dogs showed nicely into a strong wind. At 11 headed west along the grain field birds were seen in the air, Rum credited with a stop to flush. Rum was picked up at 25 at the water tank. Got This showed strongly through the hills north of and along the creek. Got This finished forward in the treerows.

Upfront's Southern Star (Lance Schulz) and Prairie Tank (Glenn Conover) were released on what would normally be the back half of course No. 2. Both dogs started with good strong races, Tank's being more directed. At 15 as Tank's scout was trying to bring him forward, "Roo" came back to the area and pointed. Scout called point, Schulz returned to his dog and birds were produced with all in order. Both dogs regained the front. Leaving the water tank at 30 both dogs were still running well. Point was called for Roo at 35 on the hillside and birds were produced. Passing the grain bin heading toward the next water tank, point was called at 42 on the ridge to our right. Upon arrival both dogs were standing. Schulz flushed birds over the mannerly Roo and Tank was credited with a back. Leaving the water tank headed toward the treerows, both dogs were running strong. At time Tank was forward in the treerows and handler and scout were searching for Roo. Point was called for Roo, birds were produced, all in order. Roo had run strong and precisely located birds four times, her style on point great, setting the bar for the rest of the contestants.

Rebel Stoke (Marcos Puiggari) and Tucalota's Rebel Buck (Mayhew). At 9 birds lifted on course in front of the handlers. Buck stopped to flush. At 28 point was called for Stoke. No birds were produced and handler elected to carry the dog on. At 34 point was called for Stoke along the fence, nothing produced. At 50 we were approaching the grain bin at the start of the treerows; both dogs had been running good races. Both dogs finished to the front.

Traveler's Split Rail (Sand) and Miss Annie (Huffine). It was not Rail's day and Sand elected to pick up at 15. Annie handled well and was running the front when at 25 she became acquainted with prairie cactus. Huffine cleared the cactus. Annie continued to run the front but the heat of the day, cover and cactus were taking their toll and handler elected to pick up at 45.

Our morning started with Erin's Rambling River (Bill Stapleton) and R C's Batman (Mathews). Both started well showing well to the front. River was a bit stronger but Batman the more directed. At 35 before the road crossing point was called for both dogs. Birds were produced. Batman moved some and his handler elected to pick up. River was steady, all in order. At 45 crossing the horse pasture River had been handling kindly to the front. At 50 just coming to the second set of treerows River put pheasant in the air to end his day.

Scippio (Turley) and Cap'n Sam (Huffine). At 5 point was called for Sam with Scippio backing. Birds were produced, all in order. At 10 Huffine called point for Sam, birds produced, all in order. Both dogs were running a moderate forward race. At 20 Sam was under birds to end his day. At 28 point was called for Scippio. During an extended flushing attempt, Scippio self-relocated to end his day.

Ridge Creek Kate (Brutger) and Rocky Knoll Annie (Lockhart) started out running and showing well. Both reached the grain bin near the start of the treerows at 47. Both dogs finished forward in the treerows.

Searching For A Rainbow (Jones) and Emmalita (Turley) began well going down the treerows. In the shortgrass field Emmalita made some impressive casts, well directed. Rainbow was running well herself. At 18 point was called for Emmalita along the fenceline next to the wheat field. Rainbow came in for a stylish back. No birds were produced upon the initial flushing attempt.

Emmalita was released for a relocation and quickly pinned a group of young running pheasants in the wheat field. Birds were put to flight, all in order. Going down the treerows both dogs were forward. At 36 Jones elected to pick up Rainbow. At 41 point was called for Emmalita, a porcupine found. At 44 birds were seen in the air, Turley calling point. All was in order, a stop to flush credited. At 50 Emmalita entered the CRP field. Emmalita was showing well, getting stronger as the hour went on all the while maintaining the front. At the call of pickup handler and scout rode hard to the front to show the dog at time. A very game effort, well directed with extremely stylish and clean bird work.

H B V's Rambling On (Favor) and Tucalota's Rebel Touch (Mayhew) broke away on course No. 6, with Touch having an altercation with sharptail at 10. Rambling On was forward but without bird contact handler elected to pick up at the water tank at 25.