The Ionia State Recreation Area was the venue for the 2018 Region 13 Amateur Shooting Dog Championship.

Ionia is known for its well manicured grounds, and in 2018 they were once again well prepared for field trials. The clubs' volunteers put in countless hours throughout the summer to make sure conditions were ideal.

Making the trial special was the bird work that made each brace exciting to watch. The Brittany Club trials leading up to this weekend released 1,000 flight- conditioned quail during the ten days prior. Each dog had plenty of opportunity to point birds, with coveys upward of 20 birds being found. Richard Lipski was responsible for releasing and feeding the quail for the previous trial and also graciously provided his services for this event.

Jeff Haggis was once again the chairman for the Region 13 Amateur Championships, ensuring this historical trial continues to run. With the help of Jim Cipponeri and the Grand Valley Bird Dog Club, Bill Branham, Kent and Sherry Merryman and Chris Cagle, Sr., all were readily available to lend a hand with marshalling and were a huge help in transitioning the Region 13 Championship to Ionia.

Special thanks to Ron Sposita who provided a lasagna dinner in the clubhouse on Saturday night. Purina provided dog food for the winners and ad help. The OBDCA thanks them for their continual support. Ed and Andy Hart were on hand to drive the dog truck for the weekend.

Our judges, Marc McKinley of Conklin, Mich., and Ron Gulembo of Hudsonville, Mich., named Nosam's Rock Creek, white and orange pointer male owned and handled by Ray Wheeler of Shelby, Ohio, the champion. The judges described Rock Creek as "a pleasure to watch, handling kindly and always forward. He never came off an edge and ran a ideal shooting dog race."

Named runner-up was Mac's Hi Oh Silver, white and orange pointer male owned and handled by Tim McClurg of Fowler, Ohio. Silver had a powerful start and settled in as the brace went.

Erin's Prometheus (John Mathys) set the bar early with a five-find performance and was a pleasure to watch. Windfall's Big Hurt (Joe Guzman) had two finds but was up after a failed back.

Shagtime Scout (Chris Cagle) was out of pocket at 38 and the retrieval unit was requested. Thornapple Hawk (Jim Cipponeri) backed his bracemate at 17 but was picked up after two unproductives.

Mac's Silver Chief (McClurg) was a bird-finding machine with a 10-find performance, and was impressive in his bird work. Autumn's Irish Hart (Bill Darr) was up in Hires field.

Unapologize (Kelsey Hajek) was up at 3 when one of the coveys was too much. Traveler's Blackthorn (Greg Sand) had one find at 5 but was up at 30.

Erin's Wild Rum (Sean Patrick Derrig) was powerfully forward. A covey at 52 was too much for him. Mac's Hi Oh Silver's effort was described earlier.

Erin's Hearts on Fire (Derrig) had a find at 27 but didn't make the hour. Boumeester's Duramax (Boumeester) finished the hour with finds at 6, 11, 28, 32 and 35 and put on a nice performance to watch.

Erin's Fatal Attraction (Derrig) was closest to the winners, finishing the hour with six finds and a big finish. She was to the front but a few misdirections kept her from a placement. Rusty Nail (Darr) was scratched.

Glenmere's Amae Zing (Haggis) was up at 5. Shagtime Zorra (Cagle) was a contender, completing the hour with five finds.

Windyhill's Ray Ban (Merryman) was the hard luck dog of the stake tallying eight finds, but an unfortunate error had him in the harness at 57. Samalu War Cat (Sandy McLean) ran through a covey 30 seconds after breakaway.

Erin's Coin Toss (Sheehan) had three finds but was gone at time. Huron Creek's Mister Twister was picked up by Bill Branham at 15.

Special thanks to the judges, Marc McKinley and Ron Gulembo, for their hours in the saddle and being a great judging pair for amateurs to run under.

Thanks to all the competitors who made the trip to Ionia. We look forward to doing this again in the future. 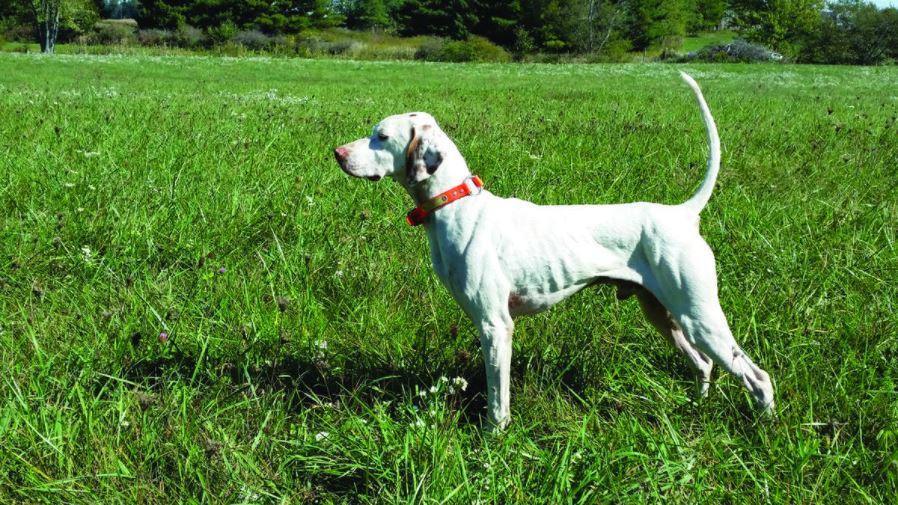