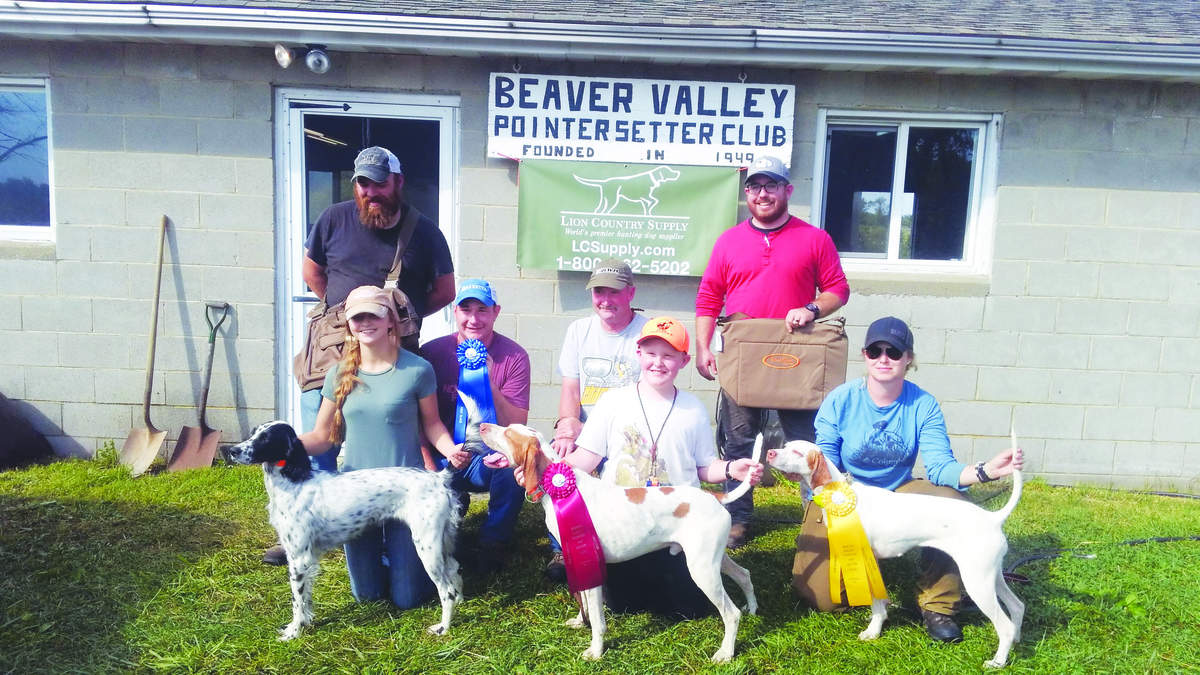 Amateur Shooting Dog Winners. In foreground, youth scouts show Larke Stormin Trexette and Backcountry Bruiser; and Caliber Peak Storm Warning with Sarah Gomes. Behind: Doug McMillen, judge; Brandon Kreuer, Chris Catanzarite and Lucas Poloff, judge.
ROCHESTER, PA. -- In 1949 a group of gentlemen gathered in western Pennsylvania with the intent to form an organization that would offer a venue for local bird dog enthusiasts to compete with their dogs in horseback field trials.

On Labor Day weekend 2019, well-wishers and competitors alike gathered at these well-known grounds to celebrate the 70th Anniversary of the founding of the club, and to continue the tradition of running pointing dogs to determine the "Best of the Day" in the field.

We owe a note of gratitude to those founders who had the foresight and initiative to push forward and offer these grounds to the field trial community. Bill Miller, Ed Honhold, George McCreary, Sam Overholt, Dick Baglan, Dick Hudson, and John Lippscomb raised funds and purchased 368 acres in the rolling foothills north of Pittsburgh, in Rochester Township, Pennsylvania.

In the next few years, a clubhouse was erected, a barn refurbished, and the first field trials became a reality. It wasn't long before walking trials were introduced. Beaver Valley never looked back.

William F. Brown, longtime editor of The American Field, said it best: "The object of field trials is the promotion and development of the high-class bird dog. It is a means of enjoying the great out-of-door sport of bird hunting in the most aesthetic fashion. It aims to provide competition of the highest kind among bird dogs, to stimulate enthusiasm among owners, and to act as a practical guide for breeders by setting a high standard of performance. Field trials mold opinions of conformation and perfect the mechanism of the ideal bird dog.

"There is a particular physical makeup of the well-bred bird dog that is indispensable to the performance of those duties wherefore he is highly valued. Without this equipment he is not so well fitted to perform those duties in a finished fashion. Bird dog trials thus influence physical standards. Although field qualities are all-important in the utility bird dog, is it desirable to have beauty of conformation, with brain power, intelligence, and bird sense." ["Field Trials: History, Management, and Judging Standards," William F. Brown, 1982.]

This is the spirit and the intent of the Beaver Valley Club which carries the club to its present day.

Our anniversary celebration could not have been a success if not for the many helping hands who pitched in to make for a great weekend. Bob Smith was our bird planter, ensuring a good supply of game in the field for our dogs to hunt. The dog wagon duties were handled by Tom Butts and Joe Cammisa. Steve Dudas, Kathleen Smith, and Anne Smith handled the kitchen duties, no small task on this busy weekend, and they did so with smiles and good conversation. The food was delicious.

While it takes people to run a good trial, it also takes support. Two stalwarts of the bird dog world stepped up to the plate and provided the support needed to keep this sport alive and well. Purina, maker of Pro Plan products, is certainly no stranger to the field trial community. Where would we be without them? If you haven't tried Purina products with your bird dog, your dog is missing out on some high quality nutrition. Pick up a bag and try it; you won't be disappointed.

This reporter would be remiss if he did not make note of the trial chairs who planned, organized, and brought this trial to a successful fruition.

Joe Cammisa and Norm Meeder, both longtime club members, deserve a special note of thanks for their efforts. It has been said by some that the sport of field trials is on the downturn, and perhaps it may be. You would not have had such an impression at this event. Joe, Norm, and the members of the Beaver Valley Club deserve special thanks, not simply for organizing and implementing a great weekend trial, but also for their extra efforts at sponsoring a Youth Stake during this weekend.

If there is anything that is needed to keep our sport alive, it is young people. Beaver Valley Club had no shortage of young people this weekend. Well done!

Beaver Valley Pointer and Setter Club is located just a few miles northeast of the junction of the Beaver and Ohio Rivers in western Pennsylvania. Being in the foothills of the Appalachian Mountains, the terrain is rolling to undulating; the grounds themselves are a mixture of woodlands and open areas, with the open areas planted to feed strips and crops designed to hold birds.

During this weekend the weather was warm and humid, and during the mid-day was challenging for dogs, horses, handlers, and judges. But, with plenty of water barrels scattered throughout the course, the dogs showed their worth and gave many worthwhile performances.

Normally, the report is given in the order of running, but this reporter digresses a bit.

The Youth Stake, held Saturday afternoon, in this reporter's opinion, was of the highest importance; it is these young people who are the future of our sport, and on this weekend Beaver Valley Club members showed that there is a good future if we are willing to grasp it. The Youth Stake featured nine excited and energetic entries, each with a bona fide bird dog graciously provided by a weekend participant, and a blank gun.

Running as a "bye", each handler hit the whistle and sent his or her dog to the front to find and point a bird. Running to catch up, the handler went to his or her dog, with an enthusiastic flushing attempt, and then a shot as a quail rose from the feed strip. There was even some good aiming at the bird just to be sure. It's difficult to describe the visible excitement that emanated from these youngsters. The youngest handler was six years old; the oldest, fifteen.

When asked about the event, the most common statement from the handlers was, "When can I do this again?" Out of the mouth of babes.

I think the Beaver Valley Club has an answer to that. Let's spread that enthusiasm. Every handler who participated received a certificate, and a bag of "goodies" to take home. Because, in this particular stake, everyone was a winner.

The 30-minute stakes opened on Friday with the Open Shooting Dog. It was hot and scenting conditions were not the best. Many dogs went birdless and the heat had an impact on performance. In spite of those challenges, Bo of Piney Woods, pointer male handled by Robert Ecker, showed an outstanding race with two finds handled with perfection to take the blue ribbon. Close behind was Suemac's Sashay, pointer female (Mark Hughes), that rendered a very respectable race and two nicely handled finds to secure second place. Anna Lake Sophie, setter female (Dave Hughes), rounded out the placements with one dug-up find and a forward race.

The Amateur stakes were conducted on Sunday. Weather was still warm and humid, but scenting conditions seemed a bit better. Most dogs had bird work.

Larke Stormin Trexette, setter female (Kreuer), took the blue, showing a wide and forward race with two nicely handled finds and a pleasing handle. Backcountry Bruiser, pointer male (Catanzarite), showed classy and eye-appealing style with three nicely handled finds to take the red ribbon. Wrapping up the stake was Caliber Peak Storm Warning, pointer female (Gomes), that carded a single, followed by a nicely handled covey on the far reaches of the course. The judges noted that there were multiple dogs in the stake that showed high quality. 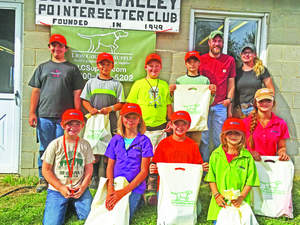