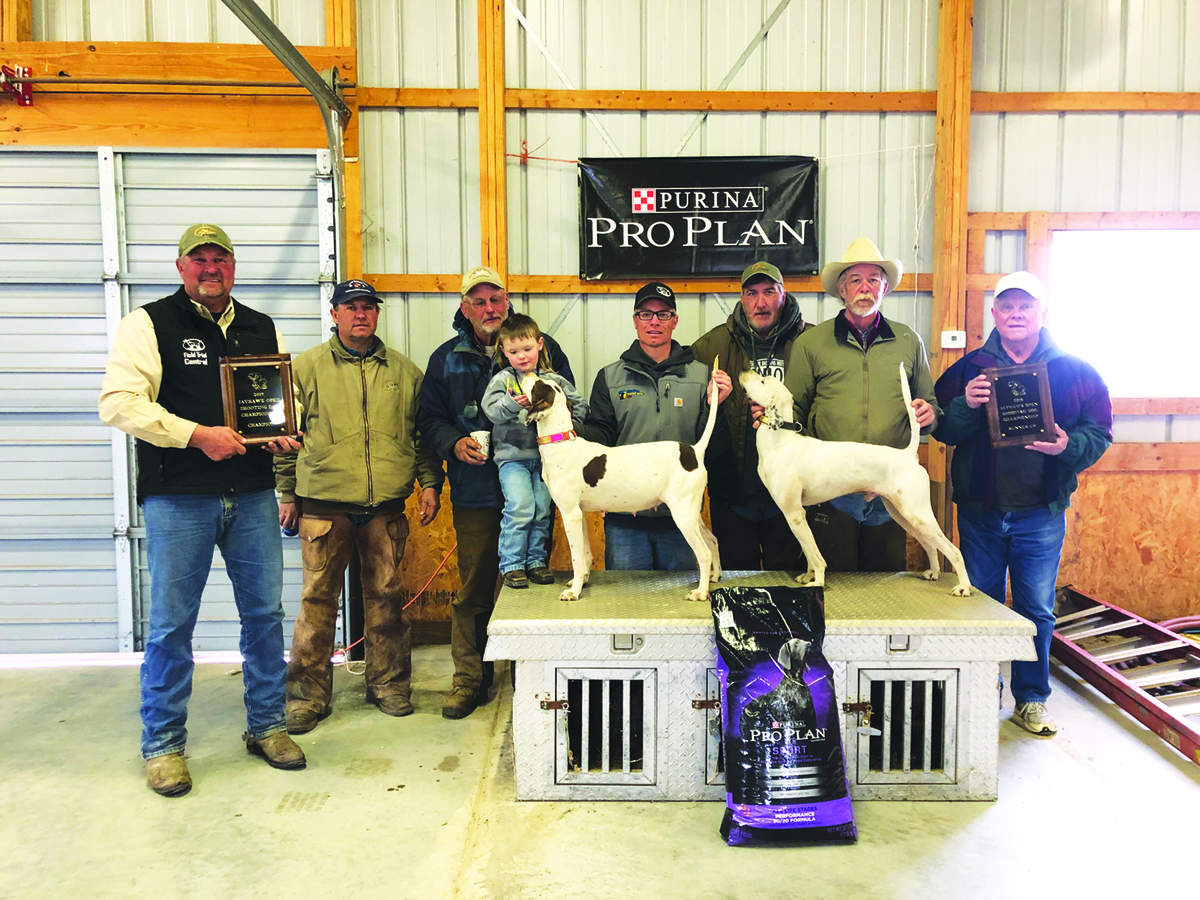 Upfront's Southern Star, pointer female owned by North Dakota sportsman Lance Schulz, was named champion. Star was handled by Shawn Kinkelaar. Star ran in the fifth brace of the Championship and although challenges were mounted none could top her performance. Star ran a solid race in windy conditions.

The new champion had three well spaced finds and in each case she displayed perfect manners. Star's style and location were excellent. Before her fourth birthday Star has won two championships, one runner-up title and a shooting dog classic. On her championship run Star carried a litter that was due in four weeks sired by Chelsea's Thunder Bolt. Owner Lance Schulz was present to see Star's performance and carried her home to whelp her puppies.

Listed in the order that they ran, Kate's Magic (Stacy Perkins), Dyno Mike (Virgil Moore) and Tangled Sheets (Eddy Taylor), with a little luck could have challenged for placement.

Bob Burchett of Grovespring, Mo., and Ken Chenoweth of Fair Grove, Mo., judged this renewal of the Jayhawk Championship. Both gentlemen are veterans. Bob is one of the leading Brittany trainers in the country and Ken works and competes with his own dogs. The Flint Hills Club appreciates both Bob and Ken giving of their time to judge this trial. Bob was accompanied by his charming wife and young son.

Running in the opening brace, Virgil Moore took the retrieval device at 42 to locate Dixie Delight. Kate's Magic had birds flushed twice by Perkins and stopped to flush during a relocation on a wild covey.

During the second brace, Shawn Kinkelaar took Smuggler's Society Buck up after he stood a second time on a dead bird. Ninnescah Trumpeter suffered a breach of manners when backing.

In brace No. 3, Eddy Taylor picked up Miss Kitty after an unproductive. Stretz flushed birds for a mannerly Lancelot's Tall Knight at 47. He had a barren stand near time.

Dyno Mike, handled by Virgil Moore, ran a strong race with two good finds. He stood a third time but Moore could not produce birds from a difficult spot and chose not to relocate. Hackberry Ceasar did not respond to Gearhart kindly and was picked up.

No. 5 paired Western Wild Rose and Upfront's Southern Star. Rose did not have game.

Mississippi Dan did not have bird work in the sixth brace. Hale's Kickstarter was reported as runner-up.

Tangled Sheets had three well spaced finds and a wide forward race in the seventh brace. Western Outta Sight had a mannerly find in the draw before the half hour gate.

Pure Gossip ran a good forward race but did not have game. Chelsea's Thunder Bolt made a wrong turn on the breakaway and Kinkelaar took the retrieval unit.

Purpleline Casper (Stretz) and Jacked Up Jasper (Moore) both delivered strong races but neither was able to locate game.

Kinkelaar flushed birds for a mannerly Touch's Rocketman behind the new pond. Grand River Bess didn't have birds and the tenth brace ended near the half hour gate.

No. 11 matched Super Natural (Moore) and Ninnescah Cooper (Gearhart). Neither dog had birds.

Tug of War stood with good manners for Kinkelaar to flush but was not mounting a challenge to dogs that had run earlier and was taken up. Cold Creek Buck was not pleasing Perkins and he was taken to the dog wagon.

Hale's Southern Touch had one good find. Grand River Mayday suffered an unproductive and both were in the harness early.

The 14th brace ended when both R J's Deicer and Waymaker Dandy Man were lost.

A strong wind affected both Hackberry Danica and Ridge Creek Kate's races. Kate had a mannerly find with Danica honoring. Both dogs were taken up before the end of the hour. Jayhawk Jailbreak suffered a breach of manners early in the next brace. Denton had two mannerly finds and one stand where Perkins could not produce game.

In brace No. 17, In Swami's Shadow ran a good race with one flawless find but failed to honor Holly Creek Lucy on her find. Bill Sand, owner of Shadow and longtime field trial patron, was present to support his entry.

In the final brace Zorra made a wrong turn on the breakaway and Kinkelaar took the retrieval unit. Ninnescah Ranger had a mannerly find but was taken up after an unproductive stand.

Silver W Joe Z, pointer female handled by Shawn Kinkelaar, topped a field of twelve to win the Jayhawk Derby. Joe Z was placed on the basis of a wide, forward and exciting race. Joe Z is owned by Debbie Ozner of Ochlocknee, Ga. 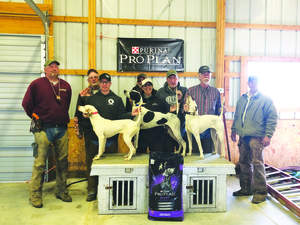 Venue for the Jayhawk Championship was the Bill Westfall Ranch near Elk City, Kan. The ranch is located in the Flint Hills of Southeast Kansas. The ranch is a working cattle ranch with over 800 head of Angus cattle. Mr. Westfall is generous to the field trial community allowing a number of championships to be run on the Elk City ranch each season. The club extends its thanks to Mr. Westfall.

Chuck Camfield, ranch manager, and his son Charlie are gracious hosts and are greatly appreciated by the club and all who attend the trial.

The Flint Hills Field Trial Club is very appreciative of what Purina does for the Jayhawk Championship and field trials in general. A special thanks is extended to Greg Blair.

Ivan Breckenridge, Harold Gearhart, David Merritt, Luke Topp and Randy Wilson make up the workforce of the Flint Hills Club. Ivan does the paper work and prepares the wonderful meals. If you go home hungry from this trial it's your own fault. Harold marshals and organizes the bird planting with assistance from Luke and David. David and Randy run the dog wagon. Luke is the young guy who takes care of all the things that the old guys can't do anymore.

The annual fish fry, among the highlights of the trial, is prepared by Ivan, Harold and Randy. The entire crew comes early and helps with the Midwest Championship before running the Jayhawk Championship and will be back in the fall to put on the Sunflower Shooting Dog Championship.