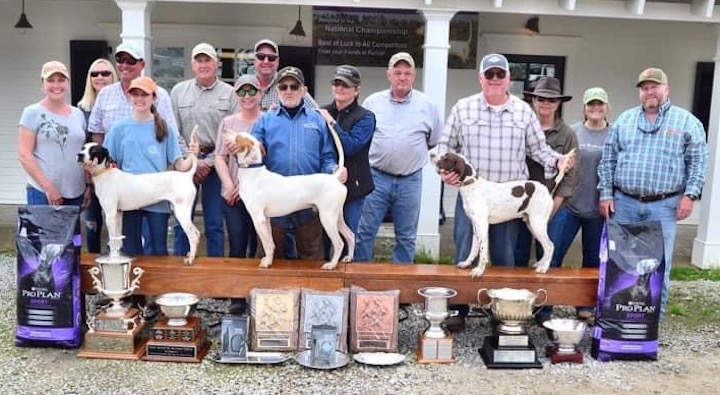 Participants around the country anticipate this field trial each year in hopes of capturing one of the most sought after titles of amateur field trials.

Mr. Raymond and Kathryn Harbert offer their grounds annually to host this prestigious trial and if it weren't for them this event would not take place. Their continued support as well as the board of directors' keeps the tradition alive.

The Free-for-All Board is second to none and their efforts do not go unnoticed. Each member plays a vital role in the success of the trial and "if there are any complaints, see Bill Lee."

There is no telling the amount of man-hours it takes to groom the immaculate grounds, but Jason Howard, Bill Lee, Chance Kelley and the rest of the grounds crew have it down to a science. The grounds could not have looked better, and there are not enough thanks for their hard work. Chance Kelley rode every single brace and was very attentive at giving direction to each handler. He, along with several board members, served as marshals and their assistance was greatly appreciated by each handler.

Captain Charles Klinck was greatly missed this year serving as co-pilot for the dog wagon; however Mr. Kenneth Newman kept the show running. He was the first smiling face seen between braces and all welcomed his participation.

There is not enough recognition for Marcellino and all the barn help in taking care of the officials' horses. Every horse was washed and well taken care of for the duration of the trial.

Last, but certainly not least, many thanks go to our judges, Elton Bray of Holly Springs, Miss., and Kevin Stuart of Schenectady, N.Y. Judges are hard to come by and good judges are a plus. Elton and Kevin rode hard and were very attentive to both dogs and handlers.

2020 was a strenuous year for the world, to say the least; however, the blessings that are bestowed upon a sportsman will never falter. Due to the ongoing pandemic the social events were altered. The Union Springs Country Club was open and welcomed field trial participants each night. The nightly social events might have been altered but the camaraderie during each and every brace was apparent. The sense of community among field trialers wasn't made at a dinner party; it was made in the heart of each and every participant that loves the sport. A worldwide pandemic cannot alter the beauty in the world of field trials.

Miller's Special Edition, owned by Jack and Fran Miller and handled by Fran Miller, was turned loose as a bye dog in the second brace. The white and orange pointer female had perfect finds at 19, 25 and 42.

Smokin Joe's Mojo, owned by Joe Brunner and handled by George Brown, and Dubose's Wander Bog, owned and handled by Bobby Dubose, were in the third brace. Brown voluntarily picked up Mojo at 18, and Dubose was given the retrieval unit at 20 after Bog had been out of pocket since the breakaway.

It was 70 and sunny at breakaway for the fifth brace -- Twin Willow Ice, owned by thirteen-year-old-year Addison McDuffie and handled by Hunter McDuffie, and Electronic Warfare, owned and handled by Bill Goodwin. Twin Willow Ice, known as Kat, 24 days after her second birthday, was turned loose for her first championship. She had three perfect finds at 9, 25 and 34. Warfare had a picture-perfect find off the breakaway, a find at 13, 21 and a back at 25.

Joe Varner's Renrav's Mr. Tony's Shag and Ernie Saniga's Jubullee were next. Varner did an excellent job handling at the Free-for-All for the first time since the early 1990s. Red, his setter male, had stylish finds at 2, 9 and 19 and ran a front-running race. Jubullee had a nice find at 9 and Saniga asked for the device at 29.

It was 40 for the start of the second day. Lester's Prime Poison Lane (Peterson) and Miller's Heat Wave (Miller) were in the seventh brace. Peterson conceded at 30. Heat Wave, white an orange pointer female had finds at 16 and 34.

Rester's Amazing Grace, owned and handled by Tony Gibson, and Miller's Record Heat (Miller) came to the line for the eighth brace. Grace had a nice front-running race; Record Heat had an unproductive at 39.

Alan York's Beckworth's Firefighter and Scott Jordan's Confident Nation were in the 10th brace. York asked for the retrieval unit at 38; Nation did not point any birds but finished the brace.

C S Lil Ann, owned and handled by Tony Gibson, and Redland's Jacked Up (Rentz) came to the line for the 13th brace the third day. It was 44 at breakaway. Lil Ann had a nice forward race with a clean find at the pond dam. Jacked up had a strong race with a back at 43.

Conway Twitty, owned and handled by Alan Atkins, and Miller's Cover Girl (Miller) followed. Twitty was out of pocket at the breakaway and Atkins asked for the retrieval unit at 21. Cover Girl had a nice shooting dog race and clean finds at 12 and 21.

Lance Servais's Miller's Top Recruit and Scott Jordan's Strut Nation were turned loose at the Coke Barn. Top Recruit, white and liver pointer male did not have any bird work but finished the brace. Nation, white and orange pointer male, went out of pocket at breakaway and Jordan used the retrieval device at 18.

Lester's Prime Passion Lane, owned by Addison and Hunter McDuffie and handled by Addison McDuffie, and Panther Creek Merlin, owned and handled by Frank Rutland, were turned loose at the Big Oak. Addison McDuffie is the youngest person to ever handle a dog at the National Amateur Free-for-All Championship. Dot, her white and orange pointer female handled like a dream, ran a good race and had a back at 8. Merlin had unproductives at 8 and 35 and picked up at 40.

It was 75 and warm for the second brace after lunch -- Sandspurs Belle, owned and handed by Todd Montgomery, and Seekin A Thrill, owned and handled by Ross Leonard. Belle ran a good front running race and had a picture-perfect find at 27 and a back at 33. Thrill had an unproductive at 22, a back at 27 and two stylish finds at 33 and 39. He took to the cover effortlessly and had a strong finish, earning him Top Qualifying Dog laurels.

C S Trump (Gibson) and Smokin Joe's Doc (Brown) were in the 18th brace. Trump, an orange and white setter male, did not have any bird work but ran tail high all over the country. Doc was absent since breakaway and Brown called it at 32.

Day No. 4 started with 55 at breakaway. Desolation Row, owned and handled by Dave McKay, as a bye dog, was out of pocket after breakaway and McKay asked for the device at 34.

S B Always Dreaming (Owen) and Iron Bully (Saniga) were in next. Dreaming had a nice find at 22 and a find at pickup. Bully had unproductives at 11 and 21.

Nickajack Pathfinder (Leonard) and the 2019 Champion Crown's Black Ice, owned by Stephens Walker and Tracy Swearingen and handled by Brian Sanchez, were in No. 21. Pathfinder, an orange and white pointer male, did not have any bird work but finished the brace. Ice had her running shoes on and Sanchez threw in the towel at 38.

Both Wildhawk (Mike Moses) and One Day Frost, owned and handled by Lane Hodges, ran a good front-running races.

It was 78 when Cheyenne Nation (Jordan) and North Country Girl (McKay) were turned loose behind the barn. Nation had a back at 20. Girl had a find right off the breakaway, a find at 13, an unproductive at 20 and a nice find at 25.

Erin's Johnny Walker (Stallings) and Native Leaf, owned and handled by Justin Howard were in the 24th brace. Walker ran a good race but did not have any bird work. Leaf had a clean find at 7.

It was 66 at breakaway for the 25th brace on day No. 5, the last brace of the qualifying series -- Miller's Upgraded Version (Miller) and Miller's Unbridled Forever, owned by Neil Walker and Great River Kennels and handled by Brian Sanchez. The white and orange pointer males had the judges on their toes the entire brace. Version ran a great front-running race and had classy finds at 29 and 34. Forever covered the country and ran a strong, forward race with a picture-perfect find at 31.

The 2020 champion, Dragonfly owned and handled by Jim Hughes, receives an automatic berth in the finals.

It was 76 at breakaway behind the barn. The white and liver pointer male Dragonfly burned up the countryside. He had a find at 27, and went out of pocket. Hughes asked for the retrieval device at 55.

Bracemate Twin Willow Ice, Kat, the youngest dog in the lineup, put on a show. She hit every edge, showed in every possible position and ran strong. The attractive pointer female had perfect finds at 84 and 89. Her performance earned her the title of 2021 National Amateur Free-for-All Champion.

Kat is extra special to the McDuffie family. Ruthann Epp gave Addison McDuffie Kat as a puppy; it was her and her father's, Hunter McDuffie, first dog started as father and daughter. Bobby Hartwig of Union Springs, Ala., played a role in polishing Kat; his kind hands are proven to make champions.

Brian Sanderson of Cecil, Ala., scouted for McDuffie. He rode hard and was very attentive of her whereabouts. Team Cecil definitely showed up and showed out.

In a local newspaper article, McDuffie was recently quoted: "I have been mighty proud of some of my dogs over the years, but I'll admit tears were in my eyes as we headed back to the dog wagon! I've never, ever been more proud of a dog! Period!"

It was 62 Saturday morning for the third brace of callback dogs -- Erin's Outlawed and Wildhawk. Outlawed had a find at 46 and was ordered up at 50 after failing to remain steady around game. Moses was handed the device at 67.

C S Trump and Miller's Special Edition were turned loose at the Coke Barn. Trump ran a strong front running race with two perfect finds at 32 and 73. Edition had an unproductive at 14 after a lengthy relocation, a back at 32, and an unproductive at 56.

Top Qualifying Dog Seekin A Thrill was braced with Miller's Upgraded Version in the 5th brace of callbacks. It was 76 at breakaway behind the barn. Thrill had three nice finds at 14, 23, 26 and unproductives at 85 and 78. Version ran a strong front-running race and covered the countryside. He had classy finds at 10 and 52 and two backs at 52 and 85. His great performance earned him the 2021 National Amateur Free-for-All runner-up title.

Miller's Unbridled Forever and Redland's Jacked Up were turned loose across from Bill Lee's driveway. Sanchez called it a day at 31; Rentz was handed his unit at 49.

Renrav's Mr. Tony's Shag and One Day Frost were in the 7th brace. Varner was handed the retrieval unit at 64. Hodges's First had clean finds at 29, 57 and was handed the device at 64.