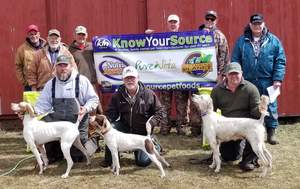 Fifty-six dogs with owners and handlers from six states participated, making this a fun and successful trial.

I need to thank all the judges and workers who helped with all the neessary work. First is Jay Lewis of Ashland, Mo., who chaired this event and judged the Open Shooting Dog along with Eddie Berendzen of Higbee, Mo. One other judge from Missouri was Joe Worsham from Easton, Mo., who helped judge the Open Derby Classic.

In addition to judging, Bob Lais and Greg Gibson marshaled, took notes for the reporter and also worked at the campsite. NutriSource pet foods helped support the trial.

A sincere thank you for all the above, without their help this trial could not have been run.

And finally thank you Paula Radcliff for your kindness in allowing us the use of your spacious Ranch for the past 45 years so we can enjoy field trialing on private grounds in Kansas.

Weather conditions this year were a real challenge. We started with the Open All-Age Stake on Friday morning with temperature of 46 and rain all day; in fact it rained all day Friday, Saturday and until Sunday afternoon, keeping everyone wet and muddy for most all of the stakes.

Handlers and judges were amazed at the amount of bird work on the liberated birds as well as the wild coveys. In fact, Eddie Berendzen mentioned while judging the Open Shooting Dog they were averaging two to three bird contacts per hour.

The Open All-Age broke away on Friday morning at 8:00 a.m. Worsham's Super Sport, a pointer male owned by Joe Worsham, won first place. "Dave" was in the second brace had a beautiful find at 10 and ran a good race. Second place went to Bocomo Cherry, a pointer female, owned and handled by Jay Lewis in the third brace. Cherry had a back, a find, and an unproductive on feathers and an out-front very nice race. Third place was Cactus Jet J R, setter male owned by Mike Parnell and J. R. Cardwell of Winnsboro, Tex., and handled by Justin Crook of Jasper, Mo. Jet ran in the third brace with Cherry and had an unproductive and a nice find at 56.

Another dog in the running was Flash, a pointer male owned and handled by Doug Meyer of Tonganoxie, Kan., that had a very good find and race but was lost at 55 minutes.

The Open Shooting Dog began Saturday still in the rain with temperatures in the upper-40s and continued throughout most of the stake. It was amazing how much bird work was encountered under these conditions.

First place was won by Lone Big Time, a pointer male owned by Missy Gaines of Broken Arrow, Okla., and handled by Justin Crook. "Stevie" had a nice forward race with a find at 12 minutes. Second was earned by Traveler's Split Rail, setter male, owned and handled by Greg Sand of Hill City, Kan. "Chase" had two finds and a good race. Greg Sand also won third place with his setter female Traveler's High Point. "AC" ran the next to the last brace on Monday morning with bird work and a smooth race in dry conditions. 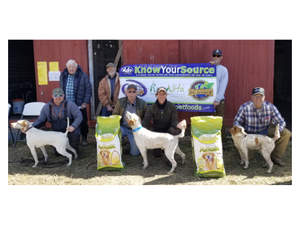