This trial was a collective effort of many field trailers pitching in to make it all happen and my thanks to everyone. Lisa Little drove the dog wagon and provided snacks along the way while husband Scott rode and scouted for many.

Amy and Bubba Spencer were on hand to assist with the lunches and Jeremy Taylor put out the quail in advance of the trial. Sportsman's Pride Dog food was once again our valued sponsor.

The All-Age Stake was won by Rebel Survivor, owned and handled by David Williams. "Solo" recorded three finds in his hour to go with a steady and forward race. Second place honors went to Cocklebur King Tut for Bubba Spencer. Tut was credited with two finds during his hour, one an extensive relocation on running birds. Third place was awarded to Coldwater Paradise for her owner Gary McKibben of Hernando, Miss. Paradise was shown on quail once in her hour.

In the Derby, David Russell's consistent winner this year, Como Thunder, took first place honors. Taking second place was River City Blackhawk for Kent Walker and third was awarded to Como Rain for Billy Blackwell. Although there were no birds pointed in the Derby, there were several really good ground races that were of true all-age standard.

Winning the Shooting Dog Stake was Lester's Top Recruit for owner and handler Lance Servais of Cecil, Ala. Recruit was credited with one find and a back of his brace mate during the hour. Taking second place laurels was veteran performer Game On for Kent Walker. "Griz" recorded two mannerly finds during his hour and pushed the extremes of the third hour at Hell Creek in his ground race. Third place was awarded to setter Swift Justice for owner and handler Brad Kennedy. Justice was shown on quail once during his hour. 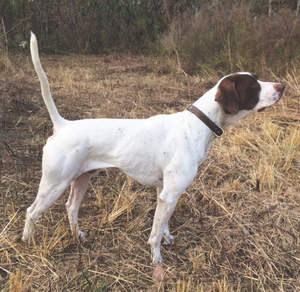 Game On, Second in the Amateur Shooting Dog Stake.