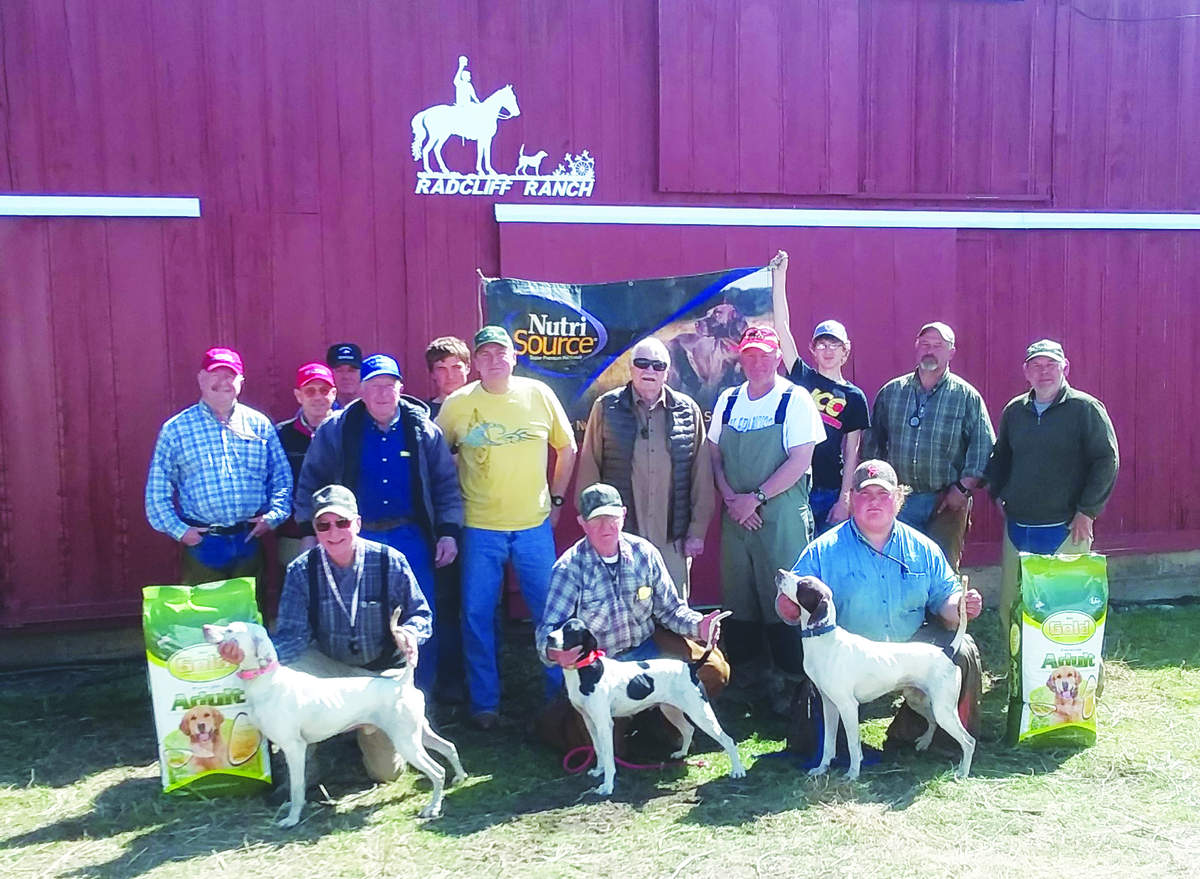 Thanks to Nutri Source for their support of the field trial ad and dog food for each winner. It was so nice of Jay Lewis and Eddie Berendzen from Missouri to bring down extra horses for those who needed them. And thanks to the Wichita Bird Dog Club members for all they did to help run this event.

Frank Schoenborn planted our birds and cooked food along with my wife Linda Beauchamp in preparing our daily lunches and suppers. Thanks to Greg Gibson for delivering the port-a-potty and judging, and Bob Lais for judging and helping the others set up camp. I also have to thank Paula Radcliff for the continued use of her magnificent ranch to run on. We are celebrating running our 43rd year on these grounds. Without private grounds we could not hold field trials in Kansas.

The Open All-Age began Friday morning, rain and a temperature of 37 . Eighteen dogs competed in this event. The rain ended in late morning and temperatures rose to 55 in the afternoon. Six wild coveys of quail were moved on the first day in addition to the planted liberated quail on the four courses used.

Earning first was H P Gone Again, pointer male owned and handled by Rodney Shoemaker of Kearney, Mo. "Max", running on the No. 2 course, had a nice forward race and a good find at 55. Eddie Berendzen's pointer female R R Craftsman placed second. "Pepper", running in the first brace in the rain on the No. 1 course, had a back at 12, a find at 22 and a big forward race. Rodney Shoemaker nailed down third place with his pointer male H P Wiggins Express. "Buddy" ran the first brace Saturday with temperatures ranging from 45 to 57 . He had a good intelligent race with a find at 38. Another very nice performance was by Tom Curtsinger's pointer female She's A Knockout which had a find at 12 and a wild covey at 20 but needed a stronger finish.

Twenty-two dogs competed in the Open Shooting Dog on Saturday and Sunday morning. Sunday began with 47 and ended with sunshine and 65 , a very nice ending to a long weekend. Six additional wild coveys were moved on Saturday and Sunday. Dr. Pat McInteer of Falls City, Neb., duplicated what Rodney Shoemaker did in the Open All-Age by winning first and third place in the Open Shooting Dog. Pointer male Nemaha Boot topped the field running on the No. 4 course with a nice find, a back and good forward race. Bye Bye G G, pointer female owned and handled by Bob Lais of Wichita, Kan., notched second place on the No. 1 course Sunday morning with two finds in the first 30 minutes and later a great find on a wild covey. Pat McInteer's pointer male Nemaha Rio, running in the last brace on course No. 3, drew an unproductive at 7 then nailed a wild covey at 14 and finished the last 30 minutes with another find. A total of twelve wild coveys were moved by now. Looks like the wild birds are coming back! A couple of other pleasing performances were in the first brace with Luke Topp handling pointer male "Junior" in the fourth brace, with Zeke Topp handling pointer male "Dan".

The Kansas Open Derby Classic ran Sunday afternoon under pleasant skies and temperatures. At one time before the drawing we had fourteen entries but because we would have had to run well into Monday eight dogs were scratched because the handlers could not stay over and run on Monday. We ended up with six dogs in the Derby Classic. Apparently the warmer weather and sunshine had an effect on scenting conditions; all three placements in the Derby were based on ground races. 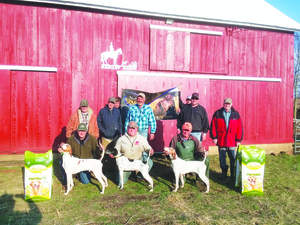