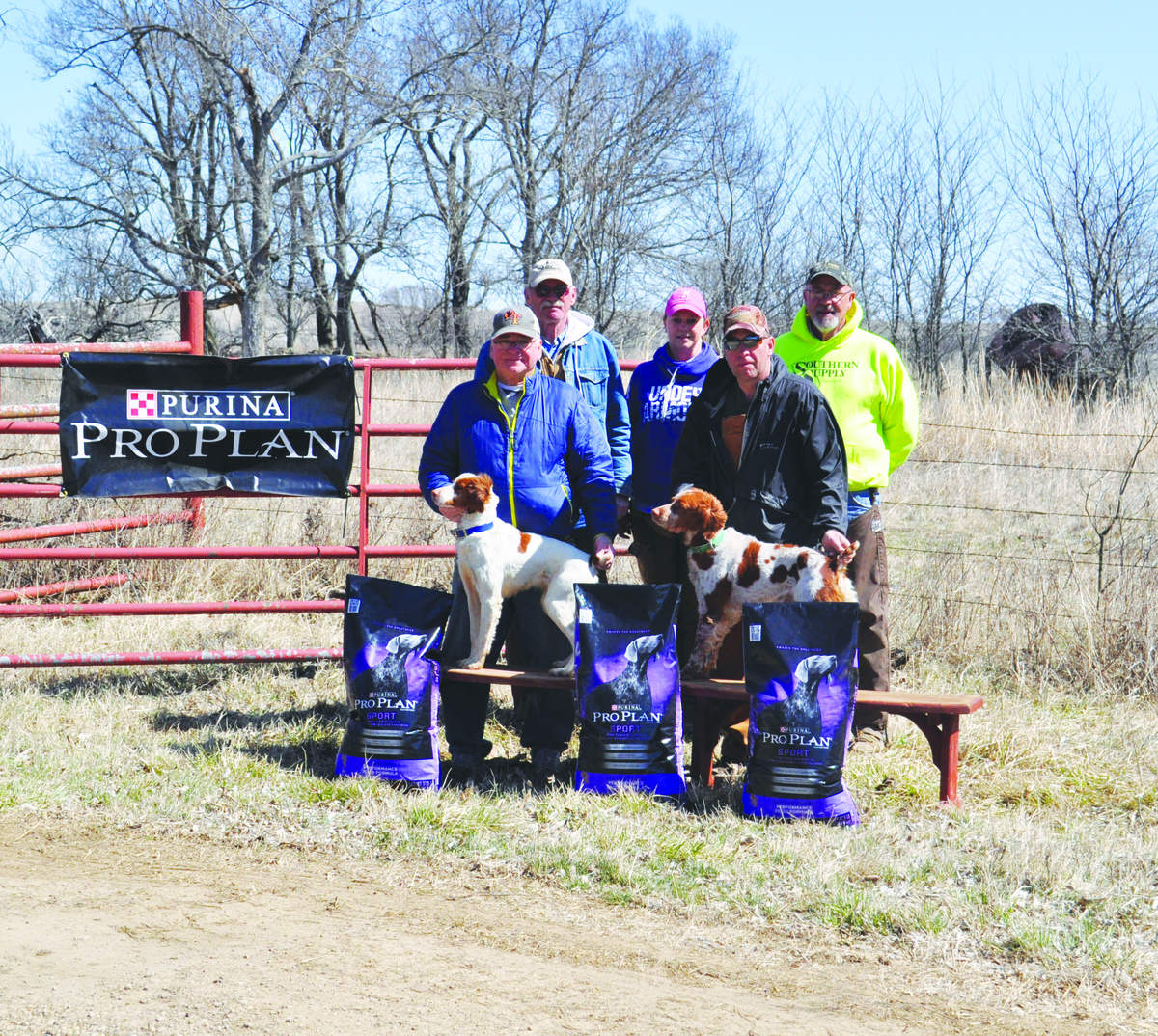 First and foremost thank you to Bill and Mary Lynn Oliver for great field trial grounds, our sponsor Purina, and our judges, Stan Truksa of Firth, Neb., and Bob Thompson of Stafford, Mo.

The weather for the start of the Championship was brisk and cold. The southwest winds picked up through the morning at about 15-18 mph.

The bird planter was out early the morning of the running planting birds for the day. As the time approached for the start of the Championship, judges Stan Truksa and Robert Thompson were at the line ready for the running to begin.

Brace No. 1 broke away at approximately 8:03 a. m. At 5 deer were seen coming out of the cover. Farm Girl Pearl (Bruce Heiter) was ahead. At 19 there was no sign of bracemate S S Rig's Colorado Gun Runner (Tom Milam) and the retrieval device was called for a little farther into the brace. Pearl went on to have a stop to flush at 28. Manners were not respected at the next find.

Arrow's Tequila Rustler (Richard Beaver) and Ocaje (Terry Gowin) were seen to the front at 4. Rustler had a nice forward find at 18. Rustler went on to have three more finds and was making really nice moves seeking promising objectives while locating his birds. Gowin called for the retrieval unit at 25.

Next up to show their style and independence were T L M Tall Tale and M K's My Lil Ammo, handled by Tom Milam and Nick Blasi, respectively. Tall Tale pointed but no bird was produced, the dog was taken on. My Lil Ammo was making some substantial moves, ranging out to the front seeking objectives. At 37 both dogs had individual finds on opposite sides of the draw. Tall Tale suffered another unproductive and handler picked up. Blasi was able to produce a bird for My Lil Ammo, she showing her steadiness. She went on to take the top of the prairie showing her all-age performance against strong winds. She pointed at 57, and showed at time.

After lunch, No. 4 took the line -- Hehi's Slim Chipley (Matt Healy) and Tequila Scorcher (Beaver). They completed the course, Chipley without bird work and Scorcher having three finds and a stop to flush. Scorcher finished the hour with style and quality of an all-age dog.

Tommy Thomas called for the retrieval unit for Tommy's Raisen A Leprechaun. Bord work by Hehi Miss Poison Ivy (Healy) did not go well; she was overcome with temptation.

Wiyanna and Wichita Wild Woman broke to a line toward the pond at the breakaway. Respective handlers Gowin and Blasi were able to call the dogs back toward a forward motion along the course. Wiyanna completed the hour with no birds. Wild Woman was making an attempt at handling her birds with respect but failed to point faithfully.

Saturday morning brought clear blue skies and less wind than the day before. Brace No. 7 was released into the bright rising sun. Jazz Em Up Arrow was off to a good start but was picked up by Rick Hastings at 14 for a breach of manners. Sniksoh Spank's Hank (Blasi) had some stylish and mannerly bird work carding three finds. His performance didn't measure up to the all-age field this day.

S K F Cheap Bourbon Whiskey (Steven Foster) was a little short on her range as an all-age, although she had a nice find at 12. She had another find at 20 holding her manners. She went on to have three more finds and a stop to flush shortly before time was called. A Trace of Bourbon With Diamonds (Hastings) showed talent as an all-age with a couple of nice casts, all while moving in a forward motion. He was cautioned into an honor by handler. His first find was at 26; he handled the situation very well. He went on to have another find and ended his performance well at time.

The last brace of the stake was a bye -- Crossed The Line. Handler Richard Beaver took the dog off the line and through the first two turns of the course and was later out of sight and handler called for the retrieval device.

At the conclusion of the Championship the official placings were announced with M K's My Lil Ammo being named champion. Runner-up was Arrow's Tequila Rustler. Both dogs were entertaining to watch and had all-age style and finesse. Third place honors went to Tequila Scorcher, and A Trace of Bourbon With Diamonds placed fourth. All dogs were selected on their ability, for intensity on bird work, handling and all-age range. They all executed well and were deserving of placements.