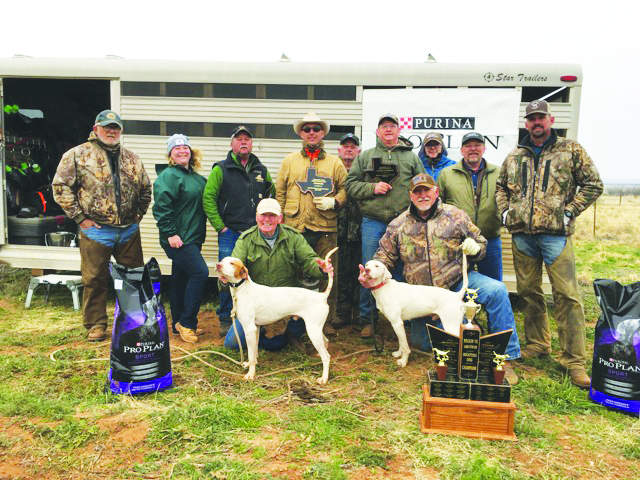 President of the board is Mr. Justin Trail; Executive Director is Dr. Dale Rollins. And with their guidance, the day-to-day research efforts are overseen by Daniel King and his assistant, Ms. Kelliann Nemec. Together, they form a dedicated team that is working to understand the inter-species dynamics as they relate to the successful propagation of wild Texas quail.

To successfully reach these goals requires a team effort. Assisting in this effort are recent college graduates in the appropriate fields employed as technicians. This team manages the 4,700 acres with, but not limited to, prescribed burns, removal of invasive plants, light plowing to encourage forb and insect growth and live trapping of birds for radio telemetry studies. All toward one end -- Wild Texas Quail.

After two and a half days of hard running, a total of thirty coveys were moved either by the dogs or the gallery. Even though bird counts are down all across west Texas given the weather and the birds beginning to pair for the breeding season, it would appear that the RPQRR is on the right track.

Each year your scribe is tasked with thanking everyone who makes these events possible. The best part of the job is watching the list grow. Buck Neil has worked tirelessly to find wild bird venues for both the Amateur All-Age and Shooting Dog Championships. Last year, he and our chairman, Dickie Sorrell, spent the time necessary to ride the grounds and lay out three one-hour courses that flowed well and gave each dog a fair chance at finding birds. Their efforts have resulted in an excellent venue.

Chip Martin has served as our liaison with the ranch, getting everything in place for the trial. Ray Black and Dickie Sorrell manned the dog wagon. Mary Ann and Royce Gustafson kept us fed.

And without the generosity of the Rolling Plains Quail Research Ranch this trial wouldn't have happened.

We also thank our trial sponsor. Many thanks to Greg Blair for Purina's continued sponsorship of our Region 7 Championships. All placed dogs received bags of Purina Pro Plan. Purina also assists the trial financially.

The Texas trialers thank you one and all!

Trialers from Kansas, Iowa, Oklahoma and Texas were in attendance for this year's renewal.

The judges for the Championship were Ronnie Sale of Jonesboro, Tex., and Brent Murphy of New Braunfels, Tex. Ronnie is a well respected trainer of quality German Shorthaired Pointers. Brent is the manager of the Good Bull Ranch, located near New Braunfels, Tex., where he operates his Southpoint Kennels. Both gentlemen are well versed in the search for wild quail. Their decisions were well received.

Earl Elkins joined Ronnie Sale in judging the Derby. Earl has been a large part of the Texas trial scene for many years and has a wealth of knowledge where wild quail are concerned. They sorted through a strong field and came up with worthy winners.

The Region 7 Amateur Shooting Dog Champion for 2019 is Chupacabra, coming four-year-old (June 5) white and orange pointer male owned and handled by Tyson Traw of Wichita Falls, Tex. "Big" was a handful. He was wide and bullish for the bulk of his race but always showed where he should have been when he was needed. At 43 he was found standing well out on a limb. His birds were well located, his style was adequate and manners were excellent. Big finished as he began, driving hard and independently.

Runner-up was Great White, white and orange pointer male owned and handled by Dr. Buck Neil of Fort Worth, Tex. "Pete" ran in the fourth brace. At 36 Pete was standing high and tight on his first covey. All in order he was sent on and began to roll, fast and wide but in touch with his handler. At 58 he was found locked up tight on his second find, a covey of blue quail. Pete's performance was a classic shooting dog race.

Milomix Billy (GSM/Lynne Barnett) and Rock Star Andy (PM/Buck Neil) were well away into the foggy venue. At 8 Billy was found standing deep in the cover. He was intense but ticked slightly as his handler approached. Extended flushing produced a pair of blue quail; Billy's manners were excellent. Taken on, Billy regained the front as Andy was found standing. Unfortunately, Andy's effort resulted in an unproductive. Both dogs continued to impress and finished their hour well to the front and hunting hard.

Chukarhill Rimrock Eiger (ESM/ Cindy Findley) and Great White (PM/ Neil). [Scribe's note: This was the brace of the trial, outstanding shooting dog performances.] Great White's performance has been noted. "Kip" was off into the cover running hard but a bit surprised by the cactus. As time went on he quickly adapted. At 10 he was found high and tight, deep into cover. As birds flushed Kip, if possible, was even higher and tighter. Taken on, Kip settled into a strong shooting dog race. At 50 he scored again and displayed extreme style and manners. Out of sight at time, Kip was found well to the front with his third well-handled find.

Kate's Deduction (PF/Gary Young) started a bit slow but quickly adjusted to the cover. At 36 she nailed a nice covey with outstanding style and manners. Taken on, Kate finished with a strong performance that might have challenged the leaders. Traveler's Split Rail (ESM/ Greg Sand) seemed to be confused by the cover. He never really got things sorted out and was charged with an unproductive at 43.

The first day's running ended with plenty of bird work and left us looking forward to the next morning. We topped off the day with the judges' dinner prepared by Mary Ann and Royce Gustafson. Brisket and fixin's. We were joined by Ms. Kelliann Nemec, representing the RPQRR. Kelliann shared that surveys show the ranch currently holds nearly double the quail when compared to the surrounding ranches.

Traveler's High Point (ESF/Sand) and After Party (PF/John Benoist). Under cloudy and cold conditions, running began at 8:30 a. m. Greg scratched his dog. "Lucy" had the world to herself and she tried to make the most of it. At 32 she scored on a nice covey. She was not as intense as she could have been but her manners were excellent. At 45 she pushed her second covey and her day was ended.

At the breakaway both Jetson Rise (ESM/Donna Markey) and Griff's Big Ransom (PM/Mike Griffin) were driving hard to the rear. When returned to the front, both ran hard with neither gaining the advantage. They finished birdless.

Oakleaf's Quite Man (ISM/Jim Baker) and Sinbad Hottie (PF/Neil) broke away strong and were soon seen well to the front hunting hard. At 30 "Judy" was working a running covey. She succeeded in pinning her birds but a bobble ended her day. "Murphy" ran a strong, forward shooting dog race but went birdless.

Blue Darter (ESM/Traw) and Chicks Dig It (PM/Neil). "Joe" scored first at 14 with a well located covey. His style and manners were excellent. At 20 "Pedro" was standing and Joe backed. Both displayed high style. Birds were not produced. Taken on, Joe was not pleasing his handler and was taken up. Pedro scored at 44 with a big covey. He handled his birds without flaw and finished his time hunting hard.

From breakaway, Gunna Be A Rockstar (PM/Neil) and Kolomoki Retire Soon (ESM/Mary Ann Gustafson) seemed a bit confused. By 10 they were far to the front and driving hard. As the course turned, both regained the front and moved on. At 30 "Jack" was not pleasing and was taken up. "Ret" slowed some but continued his race until 40 when his day ended.

The Derby began Sunday morning, 25 , misting rain and wind. Eight dogs were scratched, leaving ten to fight the weather and search for quail.

Second place Stormin Pro Bono, pointer male owned and handled by Fred Davis, scored a well located find at 10. He ran a strong race that might have been more forward but showed promise.

Third was Terry's White Tyler, pointer male owned and handled by Chris Cornman. Tyler was wide, fast, and to the front. His efforts did not produce birds.

Terry's White Tyler (PM/Cornman) and Gates Road Bob (PM/Brent Murphy) were very strong and fast with Tyler being the more forward of the two. It was an enjoyable brace to watch.

Pointer female Wild Texas Rose ran a strong race, working well with Brent Murphy. At times she was a bit lateral. Stormin Real Hero (PM/Davis) was a bit out of control but demonstrated excellent ground speed.

Stormin Pro Bono (PM/Davis) and Terry's White Buck (PM/Cornman). These youngsters were running hard and fast. At 10 Bono nailed a covey and Buck slid in front of him to point as well. Birds up, both youngsters gave chase and cleared them out. They finished hunting hard. 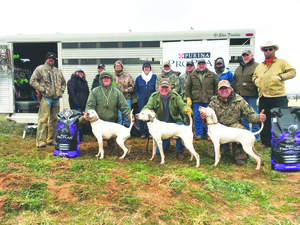