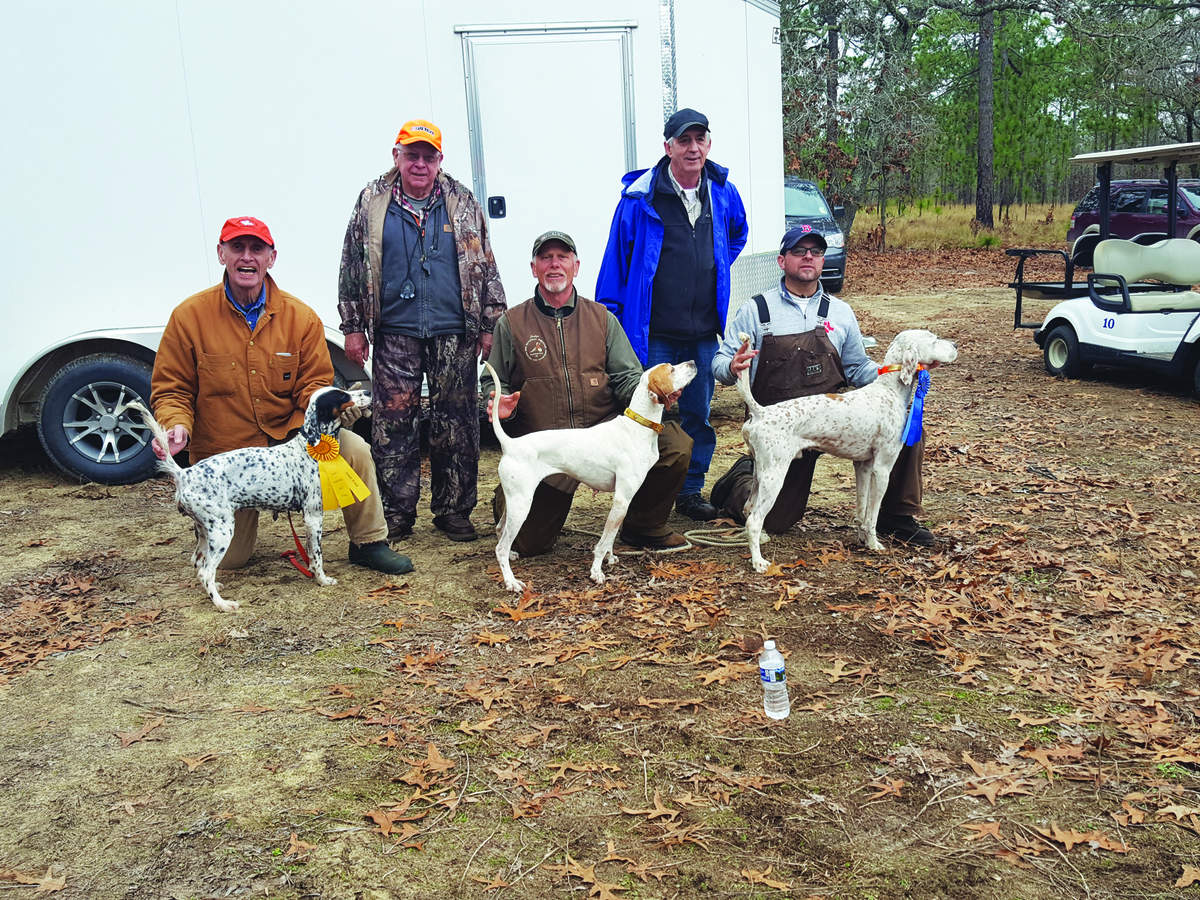 Open Shooting Dog Winners. From front left: Miss Penn Star with George Najor, Mac's Gunny Lou with Tim McClurg and Texas Free Mason with Robert Ecker. Standing: Judges Earl Drew and Tony Bly.
HOFFMAN, N. C. -- The Southern Pines Pointing Dog Club was recently formed by Gerald Movelle after an absence from bird dog field trialing. Gerald is a past winner of the Grand National Grouse Championship with his Movelle's Gypsy which he owned and trained for hunting and trialing.

Originally from New Hampshire, Gerald now resides in Southern Pines, N. C. His committee consisted of his wife, Ann, Carol Lueder, the committee member who steps up and does it all as needed, Simon Sterns who drove the dog wagon, planted birds, helped transport and set up, as well as running his first dog in a field trial. Great job, Simon!

After "Movelle" as the organizer, is the important role of record keeping. Committee member Linda Gibbs is a quick learner and serves this position well. Movelle will be upset if I do not say that his questions were answered by national secretary Mike Spotts, and friends Earl and Margaret Drew with reference to the organization's handbook.

The trial drew the interest of several hunters and area field trialers. As the three days progressed, people came and went, walking a brace or riding the dog wagon which the club provided.

The club had pop-up tents covering their secretarial needs, as well as food from coffee and donuts in early a. m., to lunch and snacks throughout the day. Carol Lueder had a display of collectible art items on a wildlife theme. These items were available for purchase or to order by participants.

In addition to committeeman Simon, fourteen-year-old Sam Ridings attended his first field trial and ran a dog as well. Bobby Phillips of Jonesborough, Tenn., has been instructing and introducing this young man and his brother Isaac and dad Silvester to the sport. The family traveled from Cummings, Ga., to handle Bobby Phillips' Kate in the Amateur Shooting Dog. Jon and Bradford Chalfant, family and friends of Miley, the dog placing in the Open Restricted Shooting Dog, were also in attendance.

Steve and Patty Forrest of Hampdon, Me., were on hand to judge and run dogs on a return trip from their daughter's home. Steve is a bird dog trainer in Maine.

Matt Phillips' dad Bruce was in attendance on Sunday. I know I have missed many folks, beyond those who ran the 85 entries, but please know that we hope you enjoyed yourselves and will return for the February 15-17 trial.

About now I am sure readers are asking, "Where are these ground?" Located in Hoffman, N. C., and accessible off Route 1, the land is part of the Sandhills Gameland. The 65,000 acres are part of the prime longleaf pine ecosystem in North Carolina. Wildlife representative Brady Beck explained to me that these lands were purchased in the 1940s from the military for the purpose of hunting, fishing and wildlife viewing for the public. The military retained rights to use the land for training if and when necessary. The public can use the land 365 days a year for hiking and horseback riding, as well as three days a week for seasonal hunting, fishing and dog training.

These lands are separate from the Robert Gordon Field Trial grounds located off Derby Road on the other side of Hoffman.

The land we used is about four miles off Route 1 on Old Laurel Hill Road. The group provided water for animals, a dog/people wagon, johnny house, set up tables and tenting as a meeting place, all in an ample parking lot.

The 30-minute course traversed north through the piney woods, bending in an easterly fashion to form a large oval which brought us back to the parking lot on the southwestern side. There are several fire paths and dirt roads, as the state does plant feed plots here for wildlife and dove hunters. All released birds had been state tested and approved. By the numbers seen in coveys on Sunday they seem to like the area. At least one known covey had been sighted prior to the trial and a few hunters had stated that they frequently hunt this area.

Following Saturday's running, everyone was invited to the home of Ann and Gerald Movelle in Southern Pines, about 22 miles north. Those attending were welcomed by a roaring fire in the fireplace, assorted beverages and appetizers. Dinner was served family style consisting of a chicken pasta bake, a huge salad, bread and then chocolate cake and homemade cookies for dessert. Thank you for the hospitality and quality of a relaxing evening. Ann, thank you for all your time planning, preparing, serving and cleaning up for this event.

The trial drew 81 entries, which hecessitated a lengthy drawing as the committee had never been involved in a draw or the making of judging books.

Marie Bly and Margaret Drew assisted Carol and Linda in completing this task. The drawing was later posted by Mike Spotts on the U. S. Complete facebook site.

The inaugural running for this club commenced on Friday, January 18, with a 19-dog Open Puppy, judged by Gretchen and John Adsit who reside six months in Vermont and six months here in North Carolina. They commented on the quality of the puppies entered, which made their decision enjoyable, but difficult. The judges said the drive of these puppies helped to distinguish the winners. Awarded the blue ribbon was Cairds Cracklin Rosie, pointer female owned and handled by Bob Little. (Bob is a bird dog trainer and guide from New Brunswick, who was also wintering in North Carolina.) Rosie was the total package on this day: speed, classy style moving, good quartering pattern and always to the front. Second went to Forsberg's Hello Dolly, pointer female owned and handled by Karl Forsberg of Lexington, S. C. Dolly ran in the second brace showing the judges a strong consistent race with good style at a wide range. Third went to setter female Sweet Southern Belle, owned by Jonathan Wilkins, albeit under the guidance of Bob Little. Belle covered a lot of ground with a cracking tail, handling well.

The Open Derby drew eight entries for judges Tony Bly of Milan, N. H., who just so happens to be wintering this year in Southern Pines. Tony was assisted by Earl Drew now residing in North Carolina for over twenty years.

First went to pointer female Bob's Elhew Sushi, owned and handled by Bobby Phillips. Sushi had three stylish finds, a back with a medium range race. She was happy and pleasing to watch on the ground as well as on point. Second went to Mac's Silver Shadow, pointer female owned and handled by Tim McClurg who winters in Hoffman, N. C., although he resides in Fowler, Ohio. This Derby covered the territory with good style and moderate range, while scoring five quail contacts. One was a Derby find and four were handled with mature manners. Third was awarded to Movelle's Chewy Gunner, pointer male owned and handled by Gerald Movelle. Chewy is a large dog that hunted with purpose and looked very good searching the piney woods at a medium range. He scored three finds and a back.

The largest stake was the Open Shooting Dog, drawing 26 candidates from ten handlers. Tony Bly and Earl Drew also judged this stake. Both of these judges are well versed in what a bird dog needs to do in competition. Top honors went to Texas Free Mason, setter male owned by Kevin Klein and handled by Robert Ecker. Mason ran a big strong race with long casts. His classy carriage identifiable from a distance and his points with high style. He stood tall and solid for quail to be flushed at 9, 12 and 20. Second place went to Mac's Gunny Lou, pointer female owned and handled by Tim McClurg. Gunny's race was an assorted medium to wide range in briskly swinging forward casts. She scored three finds, the final one making everyone take notice. Third place went to setter female Miss Penn Star, owned by George Najor and handled by Robert Ecker. Not only was owner present when recognitions were named, but George was present to enjoy her performance from the dog wagon. Penn Star is a slight setter that made spirited casts where she dug up and stood well on perfectly indicated coveys of quail. Today that number was three.

Finishing the second day was the Amateur Derby with judicial seats occupied by John Adsit and Bob Little. Placed first was Bob's Elhew Sushi, pointer female with Bobby Phillips. Sushi ran a snappy race in a ranging forward pattern. She had two attractive finds, although each time requiring a relocation before birds were flown by handler. Second was Matt Phillips' setter male Phillips Spot On which covered the course with animation and purpose, albeit did not have a find and was placed on his commendable race.

Following Saturday evening's banquet at the home of Gerald and Ann Movelle the Amateur Shooting Dog was called to the starting line at 8:05 a.m. Sunday morning following coffee and doughnuts provided by the Southern Pines Pointing Dog Club. Judges were Bob Little and Steve Forrest. As the club had done a great job of releasing birds, despite the heavy rain during the preceding night, birds were everywhere! Consequently, only two placements were awarded. Earning first was Bob's Elhew Holly, pointer female with Bobby Phillips, and second was Maximum Resistance, setter male with Matt Phillips. Holly hunted to the front in big reaching circles, slowing only for her finds at 6, 10, 12, 19, 25 and 28. She also had a back at 4. Maximum Resistance presented the judges with a happy moving, although a bit lateral at times, medium distanced race. He had three backs, an unproductive at 10 and one solid find at 27. Although ten dogs were drawn and called to the line, only these two survived the multiple birds and adjusted course on this third day.

For the Open Shooting Dog, judges were Steve Forrest and Tony Bly. Seven dogs were entered and drawn for this stake; however, only one dog survived the course and its birds. Mildred Diamond Girl Hard Hitting, German Shorthair female owned and handled by Louis Racick, was presented the blue ribbon. "Miley" ran as a bye, covering the woods with eye appeal and hunted all the right places. She scored four good finds and had two unproductives in a good walking moderately ranged race.

The final stake was the Open Derby qualifier with seven entries. Judges were John Adsit and Tony Bly. Gary Miller was presented the blue ribbon with the great mature Derby performance of his pointer male Captain Henry Morgan which moved with effortless motion as he rambled forward with speed and an abundance of style at a medium range. He scored four finds, one a very large covey which he had precisely indicated from a good distance. All but one find was adult quality for pointing style, flush and shot. Today Henry Morgan stood above his peers. Second was Cairds Cracklin Rosie, pointer female with Bob Little. Rosie began her 30 minutes with attractive quartering and then reaching forward with increased enthusiasm, scoring five bird contacts, many of them coveys, and one good find at 18. Third went to Phillips Moonlite Lily, setter female with Matt Phillips. Lily and Matt toured the course at a moderate range showing frequently to the front or side, always in good response to handler. She had two finds and one unproductive. 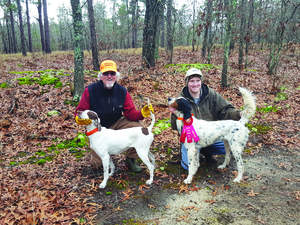 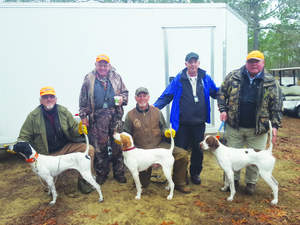