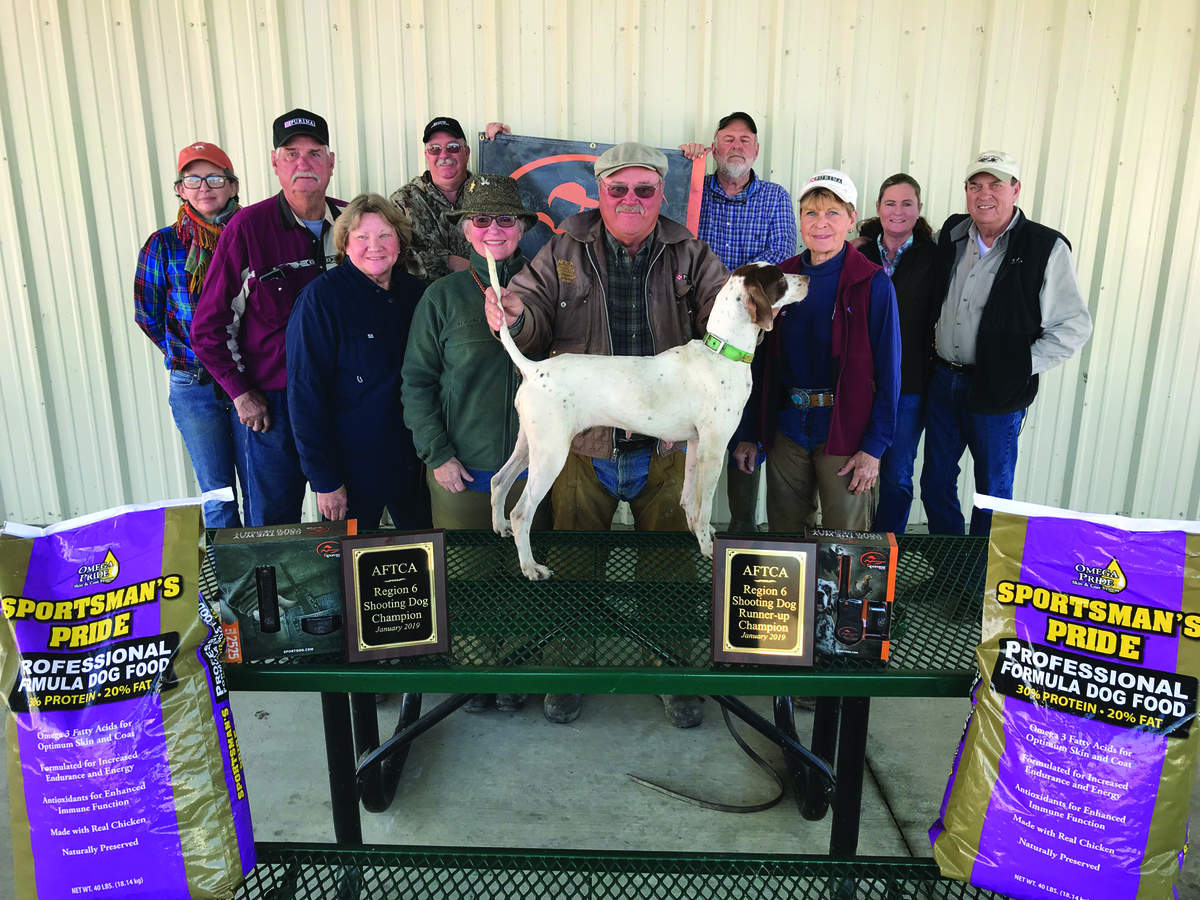 The quail program at Camp Robinson has proven to be a success. Members of the CRCA field trial group are responsible for purchasing quail, releasing them and feeding. This is manifested strictly on donations and bird fees from field trials. Five thousand quail were released in late August. Approximately 120 barrel feeders are set up throughout the courses. This program benefits anyone with a bird dog to work on these grounds. A big thank you to all who donate time and money to keep this going.

Sportsman's Pride and Brad Kennedy supported the trial with their generous supply of dog food. Each handler was awarded dog food.

SportDog representative Jim Morehouse donated training collars to this championship event. A Pro Hunter 2525 was awarded to the champion and an 1825 series to the runner-up. Many thanks to these great sponsors.

Many thanks to Harold Woodward who provided beautiful engraved plaques to the champion and runner-up.

Judging the event were E. J. and Kim Hall of Crawford, Tex. They rode at an even pace for each brace allowing all those in competition a chance to show their dogs and giving each their undivided attention.

Les Rowell, Ray Nowell and Johnny Ornsby drove the dog wagon. Getting around the wet and muddy courses was a challenge. They did a wonderful job considering the wet muddy conditions.

Too many to mention, so thank you to all who marshalled and gave a helping hand. It takes an army to put a trial on successfully. Thanks to all who helped make the trial a success.

Friday evening a steak dinner was served to all in attendance. The steaks were cooked to perfection, thanks to chefs Les Rowell and Johnny Ornsby. Carol Jones and Rita Ornsby prepared side dishes to accompany the steaks. Saturday evening heavy hors d'oeuvres were served along with great fellowship. Thank you to all the ladies who helped.

Heard Hill's Misbehavin, seven-year- old white and liver pointer female owned by Buck and Lynn Heard of Moultrie, Ga., and handled by Lynn, was named champion. Misbehavin, aka Smut, ran in the 7th brace in damp and misty conditions, apparently perfect dog running weather as she took full advantage of it running the edges of the course showing well to the front with a divided find at 8 standing with style for the flush and shot. Turned loose she continued to take in the outer edges eating up the real estate as she went with impressive ground speed and style.

As we neared the woods going to the horseshoe, point was called at 21. When we arrived Smut and bracemate were both pointing the same covey. Handlers flushed birds and fired shots, both dogs standing mannerly.

Turned loose Smut made a big cast down the left side of mountain going out of the horseshoe. She crossed the road and took the right edge line out of sight. Lynn asked for scout to be dispatched as we headed toward the parking pad. The scout called point at 39. It took some riding to get back to her location. Smut was found standing at edge of woods in knee high grass. Lynn flushed a nice covey of birds and shot. Smut puffed up a little more to show us how it's done. Back to the front, Smut continued her strong forward race taking in the country and edges. She had set the bar and no other dog would surpass her.

Runner-up honors went to Panther Creek Merlin, four-year-old pointer male owned and handled by Frank Rutland of Fitzpatrick, Ala., which ran in the 11th brace. Merlin's first find came at 14 sharing this point with bracemate. Both dogs were mannerly at flush and shot. Turned loose Merlin slammed into point at 15. A single was produced with everything in order.

Taken on Merlin ran a medium race and had some extended casts showing to the front. Point was called at 32. This ended in an unproductive. Sent on point was called for Merlin at 37. Merlin showed his poise standing stylish for the flush and shot. Merlin continued his forward pattern to finish the hour.

Marksman (Messick) and Beaucoup Creek Buck (Heisner) were turned loose at 8:00 a. m. They were forward on course, Marksman taking the edges going toward the firing range. Across the mountain down bird alley, as we neared the split for the morning course, Marksman went left and pointed in tall grass just off horse path. Buck came in for a back. No birds could be produced. Marksman was released to relocate but couldn't come up with the elusive bobwhite. Messick thanked the judges and picked Marksman up. Buck was sent on, hunting at a moderate race.

Showtime (Akins) and One Day Frost (Hodges) were quick to find birds. Point called for Frost at 2 with Showtime backing, both standing stylishly as handler put birds to flight. Turned loose Frost and Showtime were taking in the country. Point called for Showtime at 12 with everything in order. Sent on Showtime shortened and had no other bird contacts. Frost went to far horizons and was not returned.

Point was called for Touch's Two Step (Burrow) and Conway Twitty (Akins) at 3. Both handlers flushed and shot, everything in order. Turned loose Step applied himself well staying in tune with handler. Scout called point for Step at 55 standing in tall grass going toward the fire station. No birds could be produced. Time expired. Twitty was out of pocket and the retrieval device was requested.

Miller's Miss Kitty (Miller) and One Day Freeze (Hodges) were away with zest. As we crossed the second road crossing from dead horse curve, Kitty was spotted standing in feed strip on right of course at 45. Handler put birds to flight, everything in order. Sent on Kitty finished the hour in good fashion. This wasn't to be Frost's day. She took a tour of the country, not to be returned.

Warioto's Crazy Daisy (Little) and Tangled Sheets (J. Ornsby) had the far horizon in their sights and took in too much country.

Both Barker's Gladiator (B. Barker) and Trip My Trigger (Burrow) were found standing on right side of horse path at woodsedge going toward the firing range at 15. While handlers were flushing Trigger broke. Gladiator stayed put. No birds could be produced. Trigger was up. Gladiator shortened and was up at 45.

The winner, Heard Hill's Misbehavin, was braced with Bromance (Jon Humphrey). Point was called for Bromance at 8 with both dogs standing. Handlers flushed birds and shot with both dogs standing stylishly. Turned loose Bromance took the edges looking good doing it. Point called at 19, Bromance standing in tall grass with style. As we approached handler told judge that birds had taken flight. No birds were seen by the judge. Back to the front, point was called for both dogs at 21. Handlers put birds in the air, shots fired, everything in order. Taken on Bromance took the left side of the mountain edge making a showy cast and finishing the hour.

Dunwell's Cuppa Joe (L. Rowell) was quick to find birds. Point was called at 4, Joe standing at edge of feed strip, Heard Hill's Jaybird (L. Heard) backing. Handler put birds to flight and shot, Joe standing stylishly. Turned loose Joe went a few feet and hit point again. Handler flushed a single, shot fired, all was well. Released, Joe went to end of feed strip and pointed again. This proved to be unproductive. Taken on Joe finished the hour with no more bird contacts. Jaybird backed at 4, unproductive at 19, finds at 23 and 49. Jaybird was a little rough handling this day, picked up at 50.

Panther Creek Chance (Rutland) and Lawless Give Me A Break (Lawless). Point was called for Chance on right side of old cemetery at 24. As handler rode up Chance moved forward then stopped. Handler dismounted and started toward dog. Chance moved up again, birds in air, handler shot. Break was not in tune with handler today and the retrieval unit was requested.

Zara (J. Van Horn) and Miller's Shoot'em Liz (R. Miller) went down right side of course. Zara pointed at 12. Handler flushed but to no avail. Released to relocate, Zara was approximately thirty yards from where she had pointed. Handler moved up and a single bird flushed; dog was not involved and did not see the bird. Point was called for Zara at 20 standing at edge of heavy thicket. Handler elected to relocate without trying to flush; no birds were seen. Zara was picked up. Point was called for Liz at 35; she took steps while handler was flushing to end her hour.

Panther Creek Merlin's (F. Rutland) effort was detailed previously. Twice As Nice (T. Curtsinger) had a divided find at 14, all in order at flush and shot. Turned loose Nice took the edges of course and looked good going. Point called at 18. Handler put birds to flight, shot fired, everything in order. Sent on Nice had a back at 32, and was lost at 45.

Not the day for One Day Winnitgirl (C. Hodges) and Hawk (Pool) and both were picked up.

Absolute Diva (John Taylor) and Beaucoup (Heisner) were somewhat elusive throughout their brace. Scout called point for Diva at 45 in woods on left side of course going into the horseshoe. Handler couldn't get any birds in the air and released Diva to relocate but Mr. Bobwhite was not at home. Point was called for Beaucoup at 49 on left side of course as we made the horseshoe loop. Both dogs were up at 50.

Open Range Terminator (Barker) was up at 34. Hale's Kickstarter (J. Hale) made some impressive casts as he made his bid. Point was called at 49, Starter standing stylishly, no birds put to flight. Released to relocate, Starter couldn't come up with birds and ended the hour.

Dunwell's Miss Deplorable (L. Rowell) and Heard Hill's Polly (B. Heard) were away to the front. As we approached the bear trap birds were seen coming out of tall thick grass on the left side of horse path at 34. Deplorable was spotted standing. Handler walked in and shot, another bird flushed, everything in order. Taken on Deplorable had a stop to flush at 37. Point was called for Deplorable again at 49. Handler flushed birds and shot, everything in order. Turned loose she finished her hour to the front. Polly had the far horizon in her sights this day and was gone from judgment.

Lolita (Little) and Snow Drifter (R. Ornsby). At breakaway Drifter went right and Lolita left. Scout called point for Lolita at 38. Handler flushed a covey and shot, Lolita standing stylishly. As we neared Seawright's cut Drifter was spotted standing at 50 by handler in horse path facing right. Lolita came in and backed. Handler didn't have any luck getting birds up. Drifter was ask to relocate but no luck. Both dogs were up at 50.

Tomfoolery (S. Messick) and She's A Knockout (T. Curtsinger) had faraway places in their sights. Knockout was gone at 15 and Tomfoolery at 17, not to be returned.

Hale's Southern Touch (J. Hale) and Absolute Magic Liz (Joyce Taylor). Just making the loop in the horseshoe, Hale called point at 7, both dogs standing. Handlers flushed birds and shot, everything in order. Turned loose they continued down the edge of the mountain making showy casts. Both were up at 50. 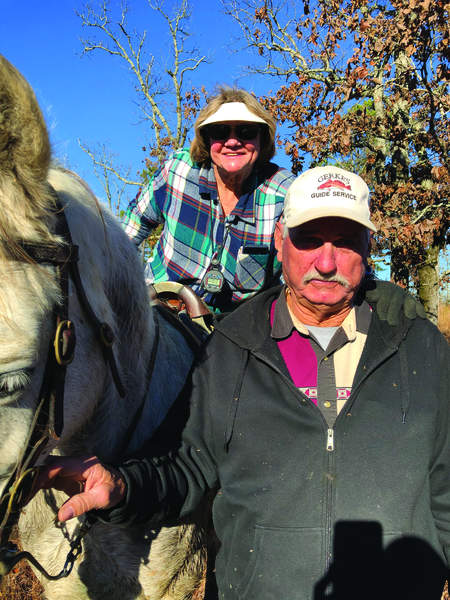