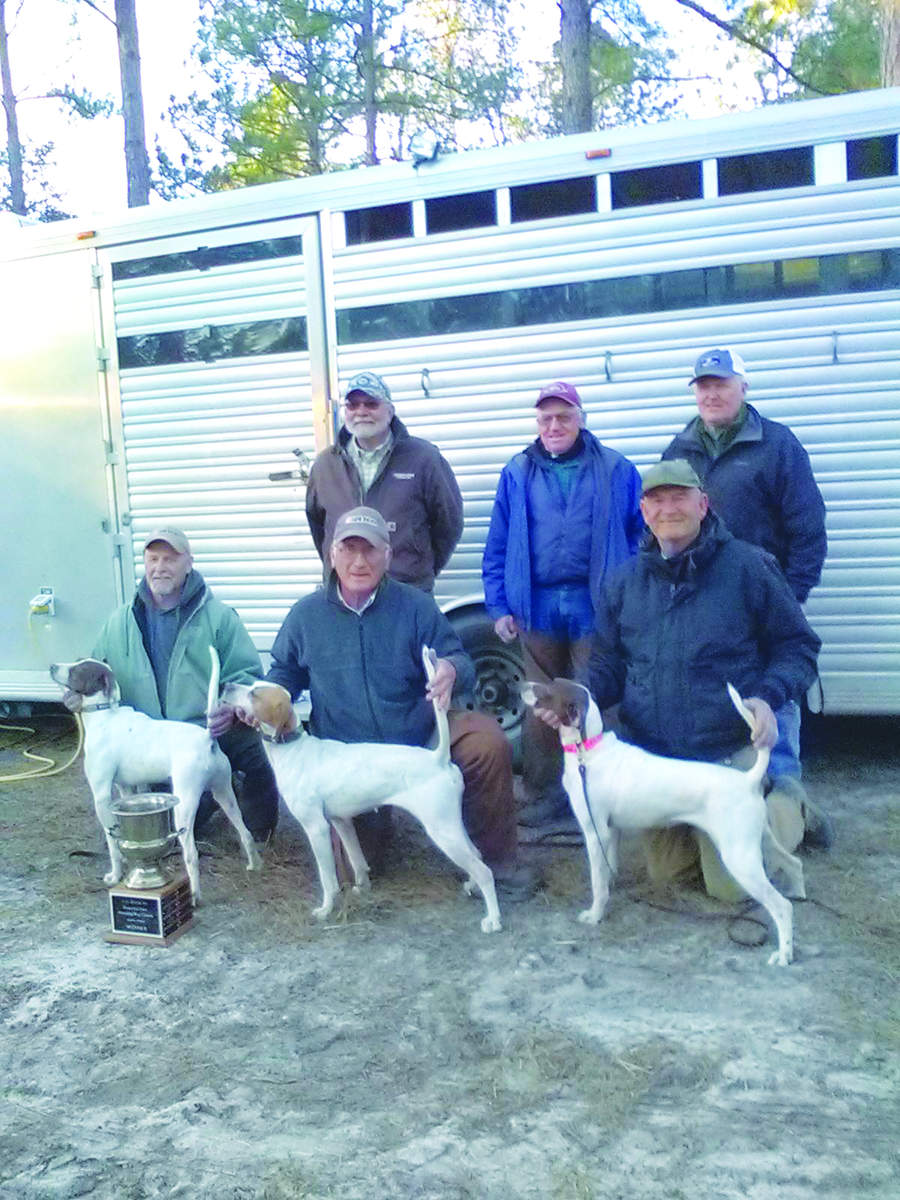 Sawtooth is owned by John and Sue Ivester, and the club greatly appreciates them letting our club use Sawtooth for our trial. The Ivesters have graciously opened their facility to various clubs in South Carolina and our club has had our trial there for many years.

This year our club was fortunate to have Sportsman's Pride, producers of quality dog food for sporting dogs, as our sponsor. Sportsman's Pride is made by Sunshine Mills whose pet food line started in 1960. The company is headquartered in Red Bay, Ala. The company has been involved with field trials for many years and has been a sponsor of the National Championship in Grand Junction, Tenn.

Sportsman's Pride provided gifts and a special treat on Friday night when they provided a meal for everyone as southern as iced tea -- a fried catfish supper with all the trimmings. You could tell how much the field trialers enjoyed the meal because when the eating started everything got quiet.

Providing other amenities at the trial was the coach who provided a fine southern style chicken bog along with green beans and rolls, and Emsley Laney who brought sandwiches Friday and Sunday. Some trialers might have experienced problems at our trial but not having plenty to eat was not one of them.

Since it is the responsibility of the judges to ensure the integrity of the trial, having good men riding in the judges' saddles is paramount. Our club was fortunate in securing two men who handled this task admirably. Ray Joye of Marion, S. C., and Steve Mills of Mayodan, N. C., judiciously evaluated each dog's bird handling ability, his manners around game and, by setting the correct pace, each dog could show his willingness to handle kindly. As testament to the good job the judges did, the two judges were invited to judge our club trial again next year. We are hoping they will be able to be with us again next year.

There were 24 dogs entered in the A. D. Hurst Amateur Shooting Dog held each year in memory of Mr. Hurst, a longtime member of the Chesterfield Club. I considered Mr. Hurst to be a virtual encyclopedia on field trials and bird dog breeding and always enjoyed riding in the dog truck with him. He imbued his son Alvin with the love of dogs and horses, and his son has been a member of the club for many years.

The Jadie Rayfield Amateur Derby is held in memory of Jadie, a longtime friend of mine and also a longtime member of the club. Jadie's favorite was the Derby, and he loved to see a big running Derby -- one you had to hold on to the saddle to keep up with. He passed down his love of bird dogs and field trials to his son, Jadie Jr., who learned the craft so well he has served as a judge of the National Championship held at Grand Junction every year. There were eleven dogs entered in the Derby this year.

First is the Amateur Shooting Dog was Harbor City Cruz, pointer male owned and handled by Tom Brigman. Cruz attacked the course with extreme enthusiasm. Four pieces of bird work handled to perfection along with a beautiful ground race earned him first place.