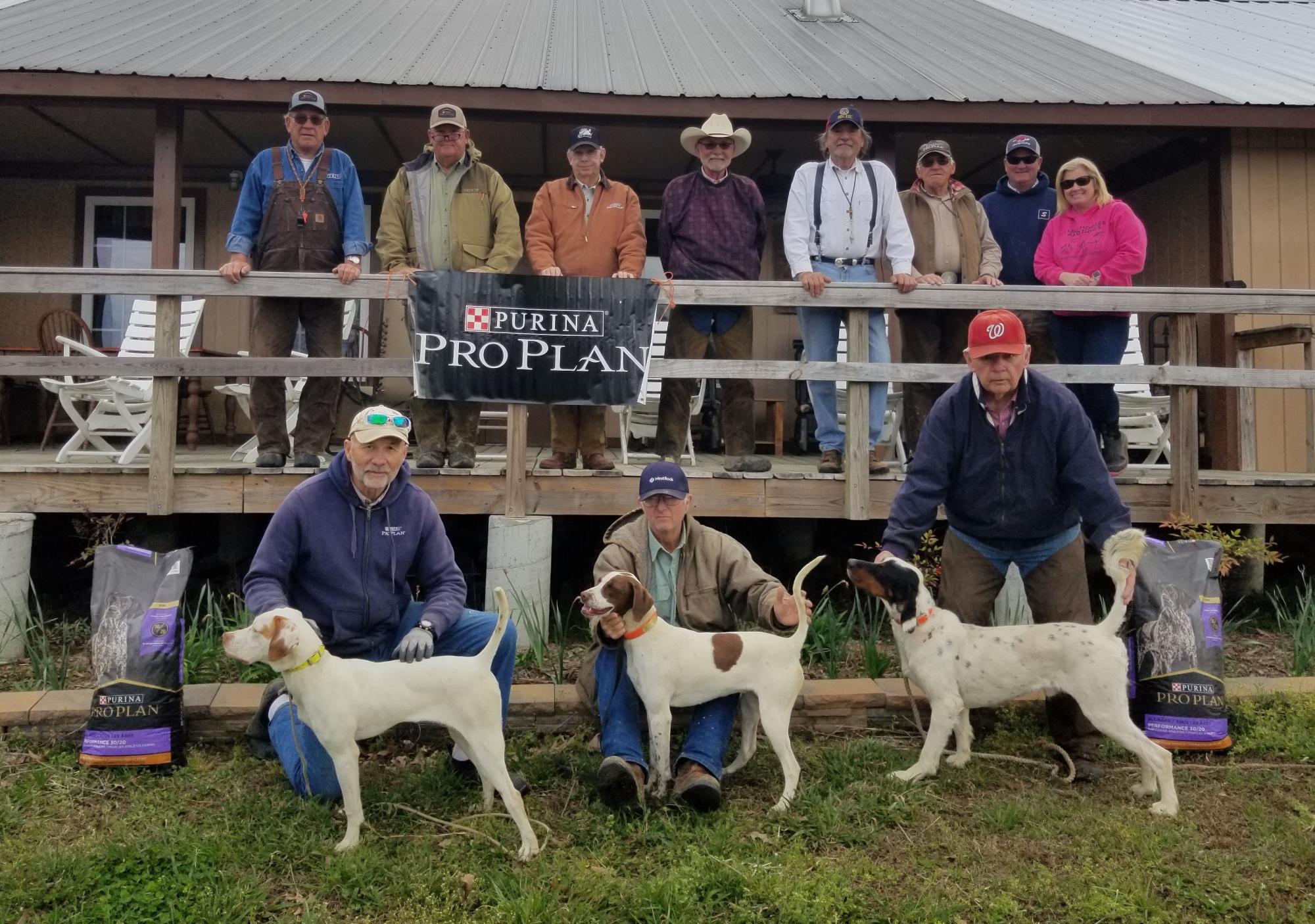 The 101st renewal of The Virginia Amateur's spring trial is in the books. Like so many trials in the past, it was a smooth running affair thanks to the dedication of the club members who shouldered the task of putting together a quality trial.

Gary Winall serves as president and has a lot of help from Ellen Clements. They took care of the drawing, printing of programs, collection of vital information for the winners, judges gifts, winners trophies and you name it, they got it done while also managing to run their talented string of dogs at the trial.

Exceptional food is a hallmark of the trial and this year's menu may have exceeded our already high expectations. As always, Barbel Fetkoter was leading the way with her carefully planned meals and deserts. This year she received a lot of support. Jim Jones prepared a great seafood dinner Friday night which was followed up with a fish fry by Lee Flanders on Sunday. Skip Brown's barbequed chicken has become a staple of this event and it was outstanding as usual on Saturday. Skip also found time to man the dog wagon.

To run a good trial you have to have good grounds. The Cutawhiskie Farm left to the Virginia Amateur by field trial hall of famer, Dr. Aubrey Morgan has been a work in progress and steady improvements have been made to insure its continued success. It's a year round task to keep the grounds groomed. We're fortunate that Parke Brinkley has taken the lead on that front with the help of our club members. It's no easy task to staying on top of the mowing, the feed strips and the maintenance of the heavy equipment.

You've got to have birds to make a field trial. Barbel Fetkoter raises them from day old chicks and supervises the early release and feeding of the coveys. The bird program has continued to improve and was further supplemented with holdovers from last year's release that successfully raised new families. The birds provided for this year's trial were all good flying and hard to distinguish from the early released coveys. Darryl Miller helped with the bird planting.

We were fortunate to secure two outstanding judges for this year's trial. Johnny Atkinson of Marion, South Carolina is a fixture of the Hoffman field trial scene and generously gave us his time. Rob Maguire of nearby Chesapeake, Virginia an experienced field trial arbiter in his own right completed the judicial team. Rob's wife, Kimberly accompanied him and got the edge off a couple of horses before turning them over to Rob. Kim also got her first introduction into scouting for this reporter and did an outstanding job.

The Verle Farrow Amateur Puppy Classic kicked things off Thursday afternoon. Two very good performances were witnessed. Just My Style, pointer female handled by Gene Hogge carried the edges and finished well to narrowly top Darryl Millers classy pointer female, Karma.
Mohawk Mill Jacked Up put down a fancy, fast race with two polished finds and a strong finish to win the Parke Brinkley Amateur Derby Classic for handler Gary Winall and scout Ellen Clements. Not far behind Jacked Up was Mohawk Mill Spur, handled by Gary and scouted by Ellen, who had two finds and a good fancy race of his own. Pagan Creek Jack, pointer male handled by Gene Hogge and scouted by Kimber MaGuire rounded out the placements with a find at pick up.

The one-hour all-age was a good stake and some very good performances were witnessed. The first two placements were handled by Gary Winall and scouted by Ellen Clements. Mohawk Mill Gangster, pointer male put down a hard driving 60 minutes with two finds and a showy, edge running race. Second was Mohawk Mill Trail Warrior with 3 finds and a great race of his own. Rounding out the placements was Bocephus, setter male handled by Darryl Miller and scouted by Steve Mills. Bocephus had 4 very good finds in his hour. The last coming at the cemetery where I'm sure Aubrey enjoyed the sight of a stylish setter on point.
The open derby stake was topped by pointer male, Mohawk Mill War Hawk with two polished finds and an extreme race for handler, Gary Winall and scout, Ellen Clements. Another Winall/Clements entry, pointer male Mohawk Mill Spur finished second with a two find and one back performance. Pat Casey piloted Remy Riper Wango, pointer male to third with a forward three find performance. 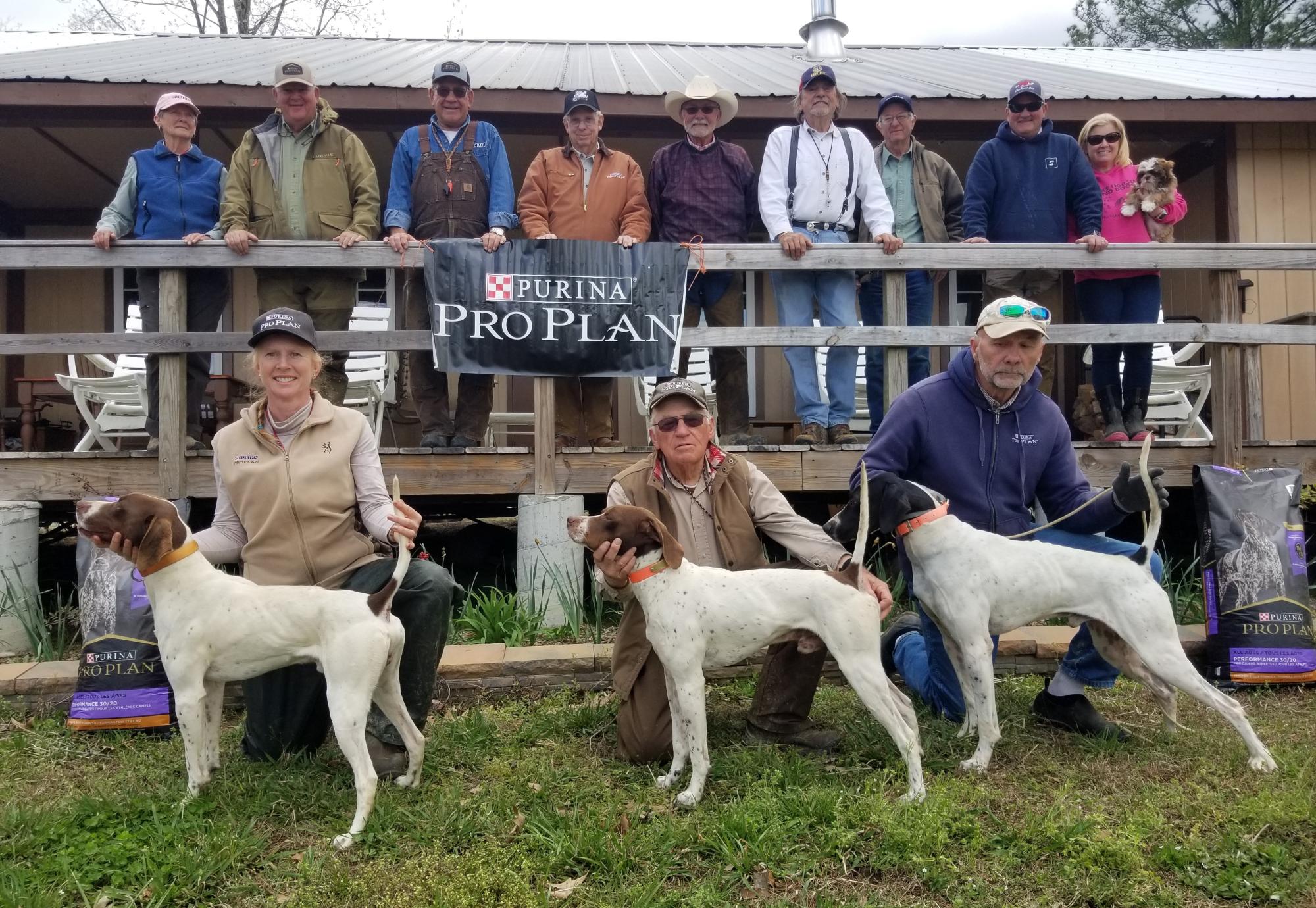 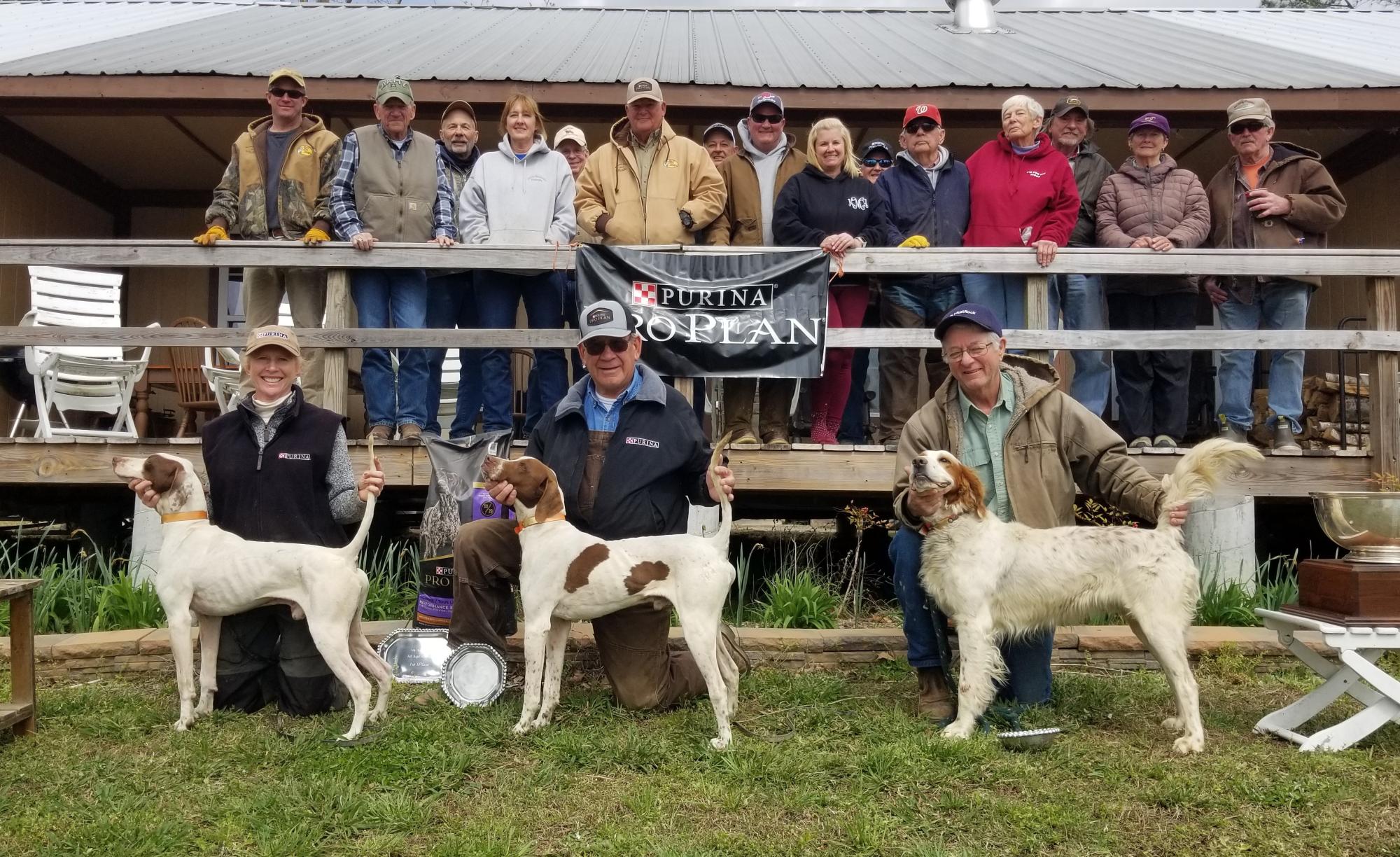 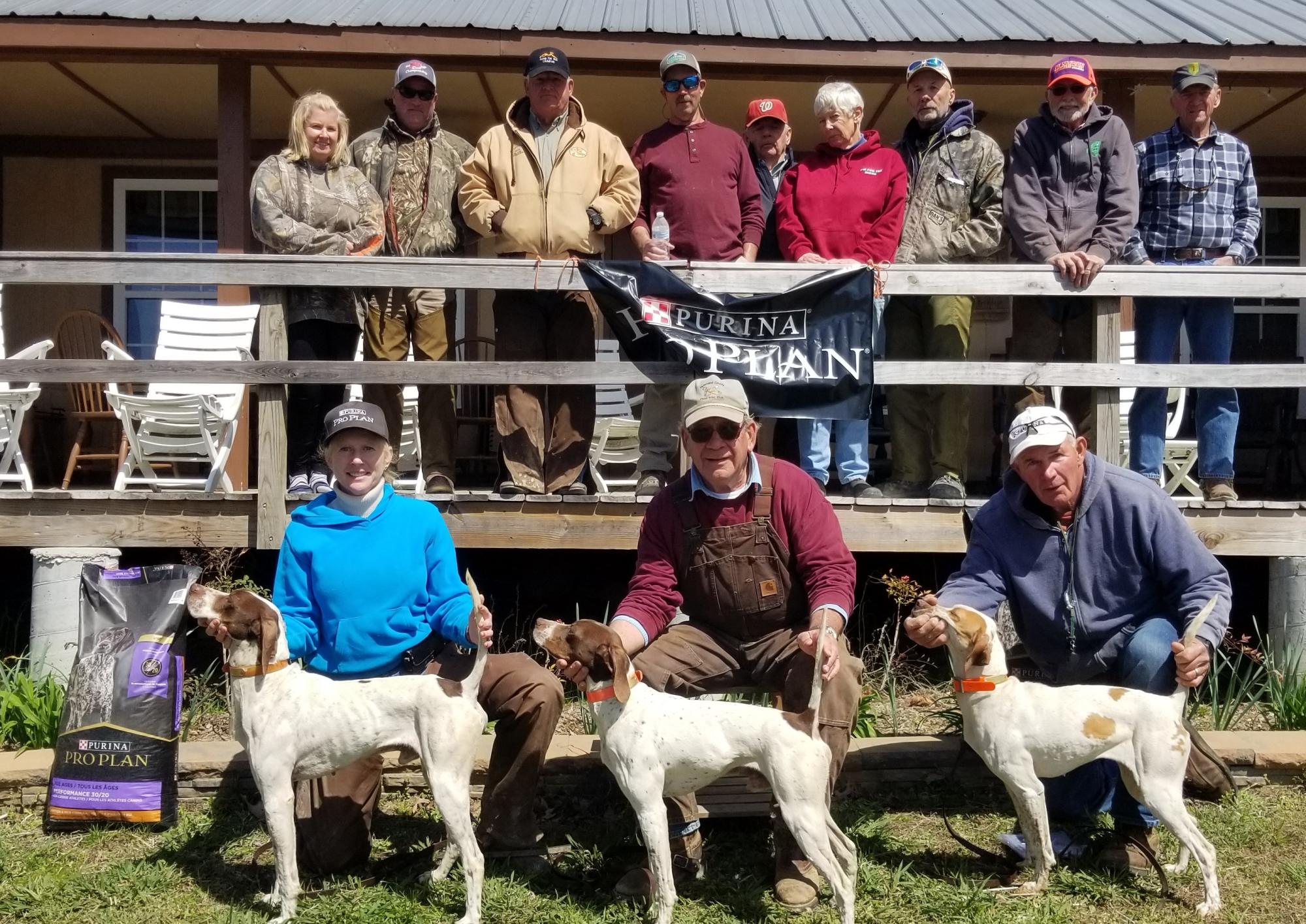 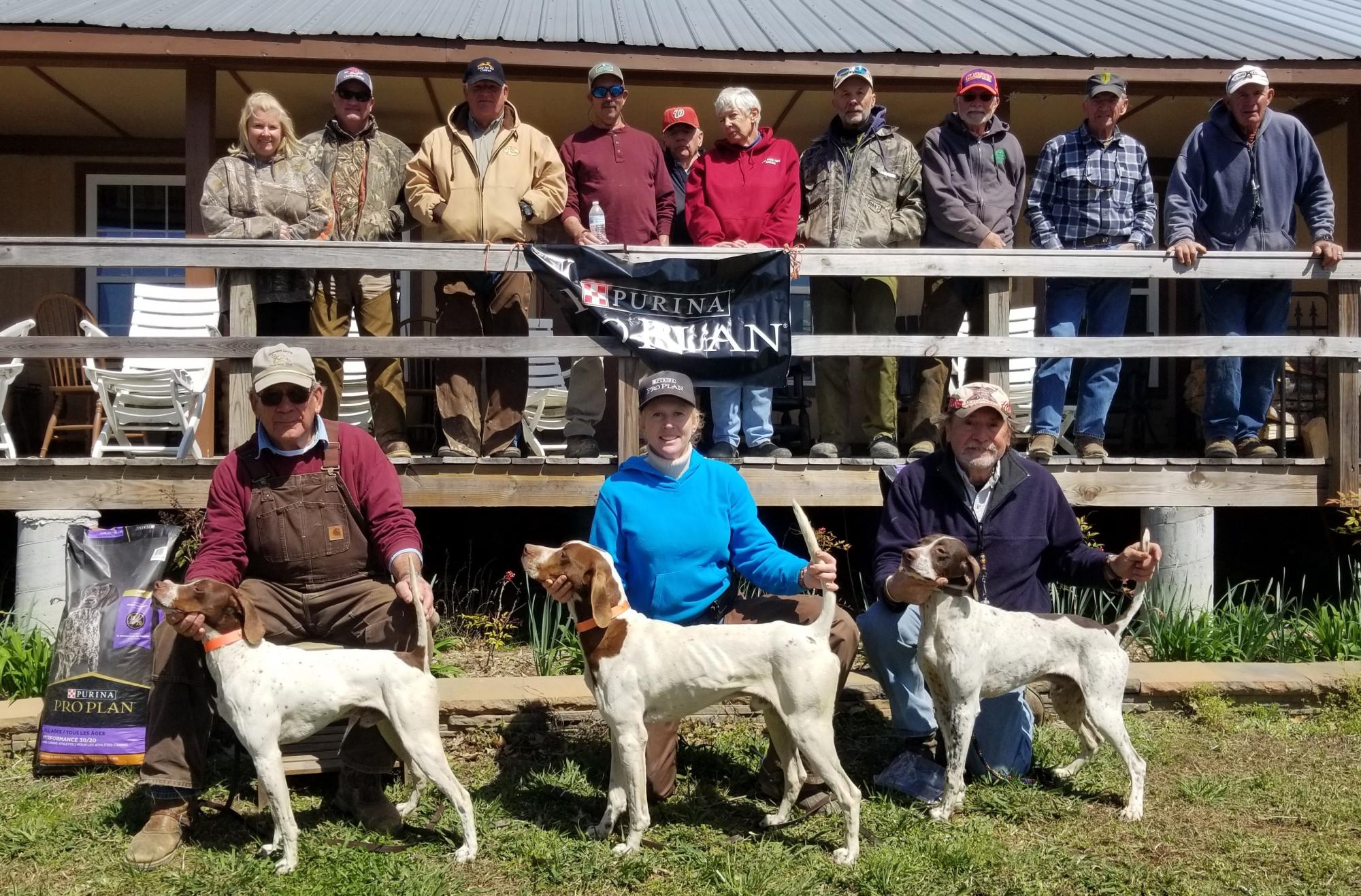