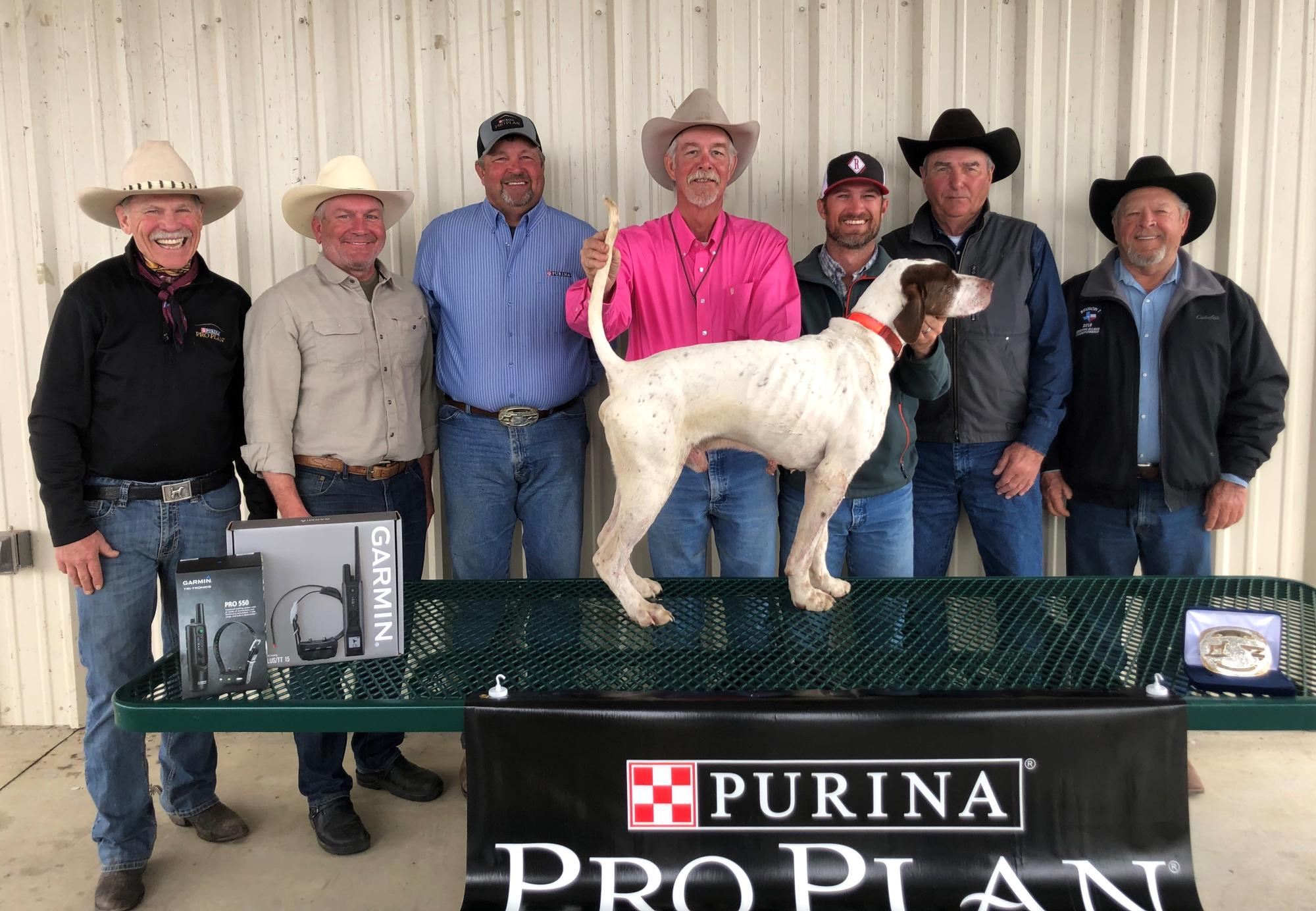 As the formal mailed invitations stated, this was "the 34th proud, annual running" of the United States Shooting Dog Invitational Championship, held February 19-21, at the Camp Robinson Wildlife Management Area, near Conway, Ark. This premier event was perceived and started by Hall of Famer John Seawright of Arkansas to honor the top 12 shooting dogs in the nation, perhaps in the world, and pit them against each other in a three-day competitive format. Each dog runs for 60 minutes on the first two days of the Invitational and then finalists, chosen at the discretion of the judges, come back for a rigorous third day 90-minute stand-off. This is a true endurance trial, the absolute proven best-against-the-best, determined by the Purina Top Shooting Dog Awards points system from the previous season. All luck is removed when contestants compete three days in a roll, are drawn out in the afternoon if in the morning the day before, on a different course, and with a different bracemate each time at the line. It's the trial to qualify for and certainly to win!

After some years of running the trial, Seawright handed the leadership reins of the trial over to Robby Robinson of Dardanelle, AR, then Robinson later moved trial management to Joyce and Johnny Taylor of Little Rock, Ark. The Taylors, joined later by Connie Crowell, have now ran the Invitational Championship for 26 years. This ultimate championship test, along with generous sponsor and benefactor support make the Invitational Championship a true aspiration win!

The Winner
This year's champion started his winning ways at Camp Robinson, earning his very first ever championship win here. And sentimentally, he earned his last championship win here, as he now begins a well-deserved retirement. That champion is the great Chelsea's Thunderbolt, owned by Dr. Tom Jackson of Columbus, IN and George Hickox of Ochlocknee, Ga. Almost ten years old, 'Bolt', white and liver pointer male, is well known in the shooting dog world. Handled by Shawn Kinkelaar of Effingham, IL, he holds the record for most shooting dog championship wins. He has earned 23 championship entitlements; seven runner-up wins and many other placements. This win makes the third time he has won the Invitational Championship. Only one other dog has accomplished this feat, Great River Ice under the handle of Mike Tracy. Bolt has also been the Purina Top Shooting Dog Award Winner of the Year four times. He has been an outlet of extreme pleasure and great pride for Jackson, Hickox and Kinkelaar. The announcement of Bolt's immediate retirement as the winner's photos were concluded was bittersweet. Though the announcement was difficult for Kinkelaar to publicly make, surely arousing strong feelings of pridefulness and melancholy from him and Bolt's owners. They assuredly are thrilled that Bolt ends his field trial career at the very top of his game, proving himself the best-of-the-best, the third time over, but also sad that they will never again get to experience the thrill and excitement of their prized champion again perform in the field.
The judges were looking for a three-day consistent performance and Bolt certainly delivered. Each day he dug hard, forward, busting the cover and hunting. He took advantage of the country offered, rimming the edges, deep in the rough stuff, where the birds are, not out in open areas or the horse path, but hunting the country. His handler rode the course, handling, not pushing and pulling. Each day Bolt rewarded with pristine bird work. And each day he ended strong. He was the best dog with the utmost remarkable performance, befitting of a proud retirement.

Co-owner Tom Jackson shared that Bolt will spend some of his time with Hickox and Debbie Ozner enjoying plantation bird hunting and Tom will also take him hunting some in New Mexico and Kansas, plus still take him north with him in the summer.
Jackson meet George Hickox through one of George's dog training seminars. They became friends, sharing passions of bird hunting, riding and the outdoors. Steve Hurdle had Bolt as a derby. George had looked at him as a new field trial acquisition and decided to let Jackson in as a partner. This would be Jackson's first ever field trial dog. The deal was done in September and Jackson's first time to see him was in December when he won the Ozark Shooting Dog Championship at Camp Robinson - Bolt's very first championship win. He then got to also witness his runner-up win in the 63 dog Master's Shooting Dog Championship on an 80-degree day. This qualified them for the Invitational Championship! Needless to say, Jackson was hooked! It's been a whirlwind of great reward, along with Bolt's outstanding career and performances and his many recognitions, Jackson spoke of how Bolt's co-ownership afforded him the opportunity to be outdoors, see the different field trial grounds and country that others don't get to see or experience, ride and meet like-minded people, but his favorite experiences has been getting to see young dogs develop, great sportsmanship - Shawn helping other handlers and them helping him, and certainly seeing top bird dog performances, Bolt's and all the many others. Jackson now has three other dogs in training. Thanks to his good friend Hickox and Bolt, Jackson will have many more good years of trailing and certainly many profound memories to cherish.

Judges for the Invitational Championship were Everett Brannan of Powderly, Tex. and filling in for Dr. Jim Mills was Harold Woodward of Vilonia, Ark. This is the second time Everett has ridden the judicial Invitational saddle. Mills would have also been returning for his second stint, if not for contracting the Covid virus the week before. We were grateful Woodward was able and willing to bail us out and arbitrate on short notice.
The Invitational begins the Friday night before the running with a welcoming reception and dinner, followed by a program of introductions of handlers and owners and each of the dogs' wins warranting their invitation to compete, a Calcutta and the trial drawing for order of running.
Participants and wins:
Chelsea's Thunder Bolt, "Bolt", #1, W & L, PM with 2,365 points
Handler: Shawn Kinkelaar - Effingham, IL
Owners: Dr. Tom Jackson - Columbus, IN, George Hickox - Pittsburg, PA
All American OSD - RU 200
TX OSD CH - RU 160
SW MO OSD - RU 300
Ozark OSD - RU 195
Razorback OSD CL - 1st 300
MS OSD - CH 310
OK OSD CL - 1st 240
Woodward County OK M.F. Ferguson CL - 1st 240
IN OSD CL - 1st 420

Declining their invitation to compete was:
Senah's Back in Business, #5, PM with 1040 points, handled by Joel Norman and owned by Benjy Griffith

Sponsors and Benefactors
The Invitational would not be what it is today without the generous support of so many. Benefactors including: Lee Cruse, Charlie and Linda Jackson, Randy and Lynn Potter, Ron Prewitt, Jack, Audrey and Brian Sanchez, and Johnny and Joyce Taylor make the $8,000 purse possible. Garmin/Tri-Tronics provides a Garmin Pro 550 Plus/TT 15, Advanced Training System with Tracking and a Garmin/Tri-Tronics Pro 550 Electronic Training Collar to the winning handler. Purina generously provided 12 bags of Purina dog food. The winner owner receives a Ross Young original oil painting of their dog, sponsored by Purina, and a Montana Silversmiths belt buckle, donated by Connie Crowell.

Friday evening all handlers, owners, the judges and any other attending professional trainers received a commemorative Invitational hat, sponsored by Purina, and an Invitational shirt or jacket. Each handler receives one bag of Purina dog food per entry and a custom Leather Brothers leather dog collar with nameplate. The dinner was sponsored by Dr. Jeff and Melanie Hale and Johnny and Joyce Taylor. The bar was sponsored, for the full trial, by World Class Kennels and Jake's Fireworks. 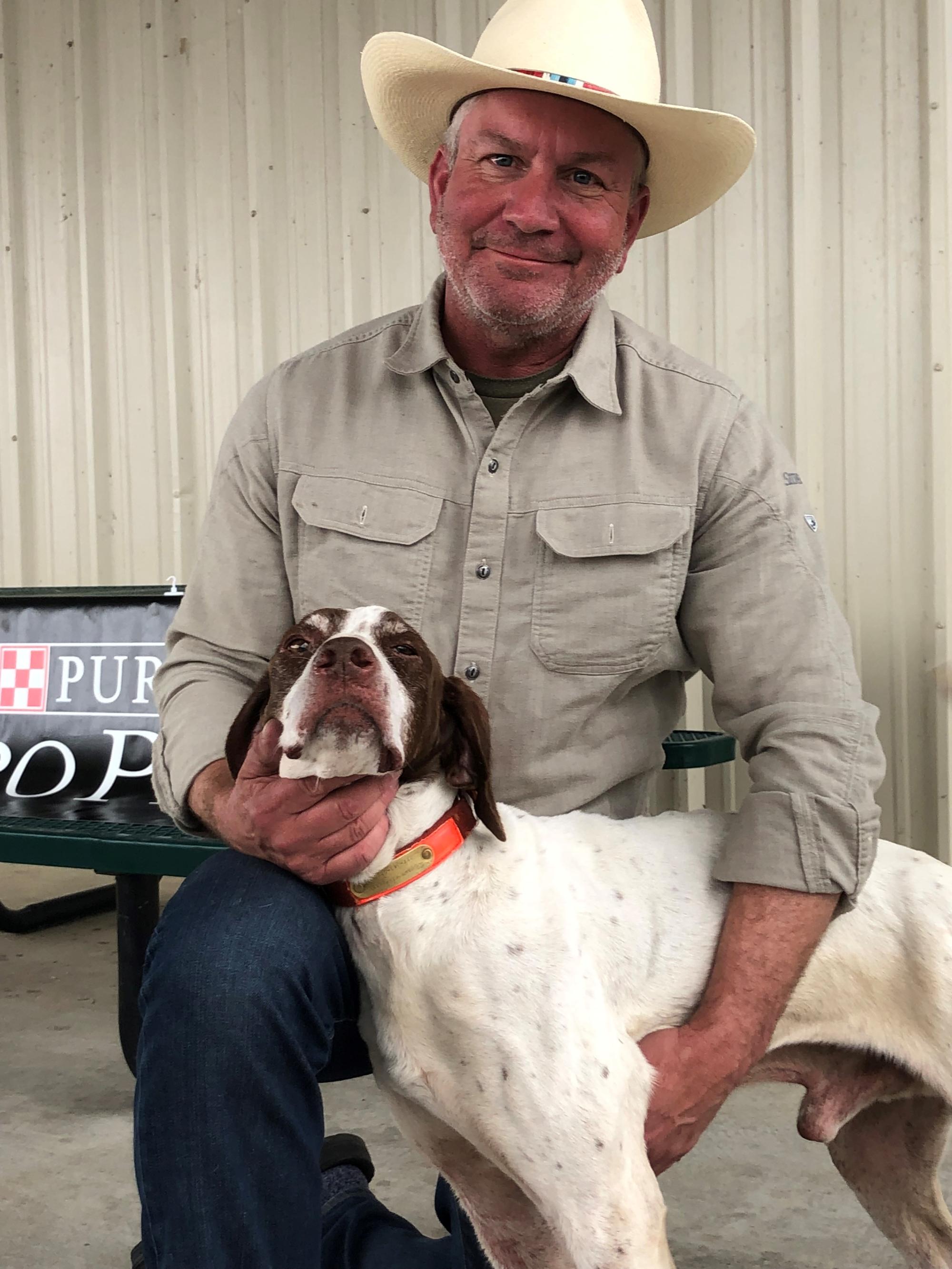