On March 22nd the Pacific Coast Field Trial Club hosted the Pacific Coast All-Age Championship in Maupin, Or on the Historical Imperial Stock Ranch. The Imperial Stock Ranch has been a family owned and operated ranch for over 142 years located on more than 52,000 acres of Oregon's beautiful high desert. Our drawing was held on March 20th at the Riverside Bar and Grill. We drew 22 dogs and our judges Chris Perkins and John Williams where able to find a champion and runner-up.
Champion bottom dog 9th brace Tian's White Speck owned by Angela Schillereff, handled by Tim Schillereff. Breakaway fast to the front. Past first big antenna. Big move out to left and down draw. Next seen far to the front on the big hill. Over the top and spotted by scout in valley below. Point with good manners on 3 chukar at 35. Around to right over saddle and into the next valley. Another big cast up canyon on right and over the top. Back to the left and forward at time.
Runner-up Bottom Dog 1st Brace Snakebite NV Pointer Female owned by Mel Lueck handled by Tim Schillereff - Strong cast to front, found standing at 5 all in order on flush. Continued on down canyon to left, across bottom and up the far side of canyon. Huge forward move across entire side of canyon. Then moved on across to front to point at 40. Finished to the front.

Brace 3: Highground Gidget -setter female owned by Lynn Stinson handled by Lori Steinshower made a Big move to left on breakaway. A back on ridge, climbing out of the bottom. NP at 50 followed by a point at 53. Finished the hour. Sleepless in Sacramento pointer female owned by Jim Wolthuis Handled by Sheldon Twer had a Good solid run, but birdless.

Brace 5: Mauck's Wyeast Owyhee Jack setter male owned and handled by Alex Mauck. Strong forward race, a bit hesitant through a herd of cows then a find at 38. Forward again, ending on a point on a pair of Huns in a juniper tree. Finished the hour. Tonellis Ruby Rae of the GSP female owned by Tom Miller handled by Tim S. Ruby started strong and forward with a NP at bottom of canyon. Started to slow and was picked up at 30.

Brace 6: Painted Owyhee Breeze pointer female handled by Bridgit Leddington. Started at big antenna. Both dogs make powerful forward casts from breakaway. Breese found on point on ridge ahead at 5. (Amy backed) Strong forward run with find at 30 around the top and finished with a big move to the front. Amy handled by J Walton. Breakaway over top of butte and down to bottom. Back up ridge to back on bracemate and 5 minutes. Continued on around side of ridge to a find at 10. Climbed out of bottom to another find on the right side of field at 40. Forward across the top then lost from view 10-15 minutes. Seen going forward far to front at time.

Brace 7: Kelly's I B Butler pointer male owned and handled by handled by Sean Kelly. Mauck Wyeast Owahee Dallee Setter Female owned and handled by handled by Alex Mauck. Both dogs broke away fast to the front. Found standing on divided find at 7 Cast off. Butler found standing at windmill at 9, Daly backing. All in order. Both dogs moved fast to the front. Butler took the top of the left rock rim, then across to right hillside. Handler elected to pick up Daly at 40 After seen under a bird minute. Butler continued around has a NP on ridge towards the end of course 1. Finished forward at the hour.

Brace 10: Smack's Red Rum pointer handled by Sheldon Twer. Burr Oak's Born Again Vizsla male owned by Jim Gingrich, handled by Brian Gingrich. Both dogs broke away with high ground speed and disappeared to the front. Brian called for the tracker at 20. Mike continued the course with some nice casts and finished with an extended cast along ridge on right to finish birdless at time.

Brace 11: Ck's Post Route Scout Vizsla male owned by Jim Gingrich, handled by Brian Gingrich. Double D's Deliverance owned by Cliff Messner handled by Tim Schillereff.
Course 2 - Both dogs off and made turn to right. Joe making a big all age cast along draw to the left. Scout moved straight down course. Joe crossed to right and made a spectacular cast along the ridge across the valley on right. It was the move of the stake. Joe was lost to the front at 40 and tracker pulled. Scout continued forward fast over top of big butte, down through the valley up into rimrock. Ending with a stylish point silhouetted against the sky at 40. Scout continued with a strong forward race with another find at 50.
Maupin, Oreg., March 22
Judges: Christopher Perkins and John Williams
PACIFIC COAST OPEN ALL-AGE CHAMPIONSHIP [One-Hour Heats] - 2 German Shorthairs, 14 Pointers, 4 Setters and 2 Vizslas
Winner-TIAN WHITE SPECK, 1666744, pointer male, by Deception's Nite White-Idaho Lucky Sweep. Angela Shillereff, owner; Tim Shillereff, handler.
Runner-Up-SNAKEBITE N V, 1667512, pointer female, by Oregon's Wren-Heyutoo Pickles. Mel Lueck, owner; Tim Schillereff, handler. 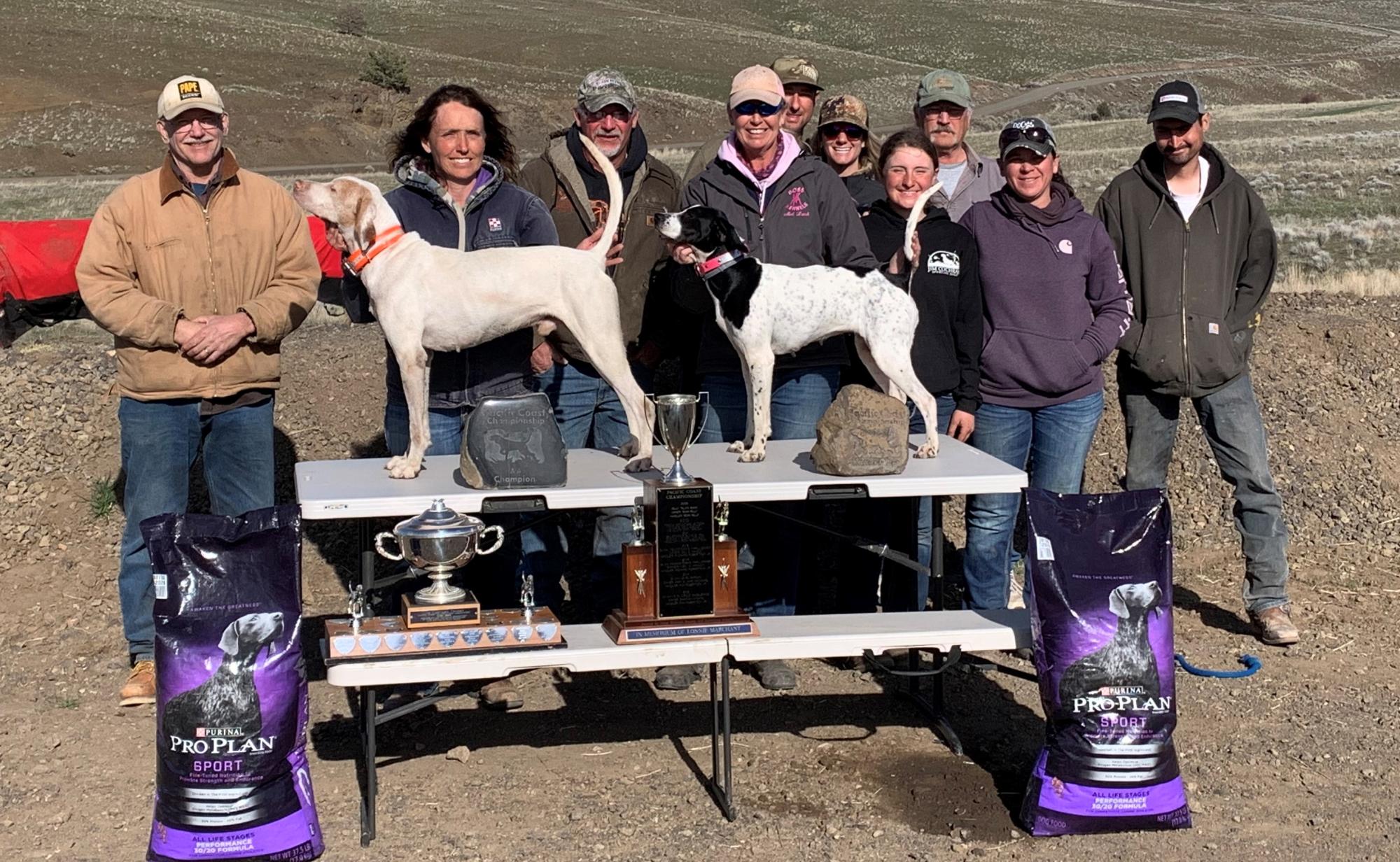 Pacific Coast Shooting Dog Championship
The pacific coast Shooting Dog Championship was also draw on March 20th at the River side bar and grill. We started on March 24th with 24 dogs drawn. Judges Ed Woodward and Todd Schaaf were excited to start the day with too really good dogs. The Top dog was C K Route Scout Vizsla male owned by Jim Gingrich and Handled by Brian Gingrich and Dunfur's Dali Bobba pointer male Owned by Jim Tesarik Handled by Dan Hoke and these dogs delivered. They both took off strong going where we wanted to see them. Scout was found on point at 5 followed by Buster at 10. Both where found a 25 on the ski line rock ridge on a divided find. Scout was found on point once again in the green Valley at 34. At 49 Both were found on point on the back side of course 1 in the rocks with their second divided find and both finished strong one on each side of the valley work the cover. When the brace was done the Judges knew it was a strong race. As brace after brace and dog after dog came up and each failed.
Brace one kept getting stronger and stronger until all came and failed to top them. We named CK Route Scout Vizsla male owned by Jim Gingrich and handled by Brian Gingrich our champion and Dunfur's Dali Bobba pointer male Owned by Jim Tesarik handled by Dan Hoke our runner-up.
When talking about the Championships one thing I feel is left out is the towns we come into and sometime take over. The great town Of Maupin Orgon always goes out of their way to help support us. Everything from the Hotels, Restraints, Bars, Markets and even the gas station. Maupin is a fishing and rafting town we are there on their off season. They not only support us but appreciate us. On my way out of town the owner of the gas station stopped me to tell me how much he enjoys having us in town. I would like to thank all my great help Shannon Schaaf, Dan Hoke, Chase Cochran, Mel Lueck, Barry Lueck, Emily Deasy, Josh and Alison Miller, 'Anthon Backnam and my very patient wife Amanda Schaaf. None of this could be posable. Nor without great landowners like Blane Carver and his opening up his ranch to us. We are lucky to have companies like Purina and SportDog. I cannot say how much we applicate everything Purina does for the field trail community. The last group I would like to thank is everyone who came and participated in the championship see you all next year.
Judges: Todd Schaaf and Ed Woodward
PACIFIC COAST OPEN SHOOTING DOG CHAMPIONSHIP [One-Hour Heats] - 11 German Shorthairs, 6 Pointers, 2 Setters and 7 Vizslas
Winner-POST ROUTE SCOUT, 1663076, pointer male, by Touchdown Guy-Vanguard's Make Her Mark. Jim Gingrich, owner; Brian Gingrich, handler.
Runner-Up-DUNFUR'S DALAI BOBBA, 1671156, German Shorthair male, by H K's Prime Cut-Dunfur's Tule Moon. James Tesarik, owner; Dan Hole, handler. 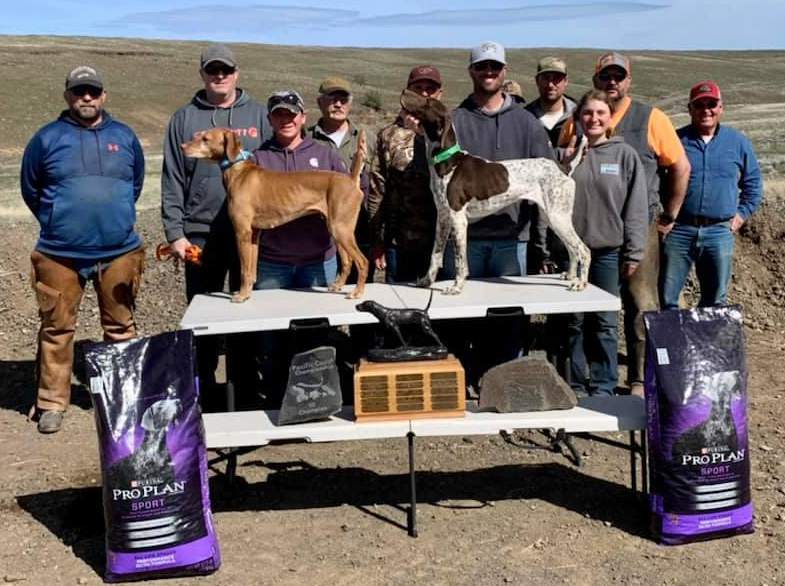