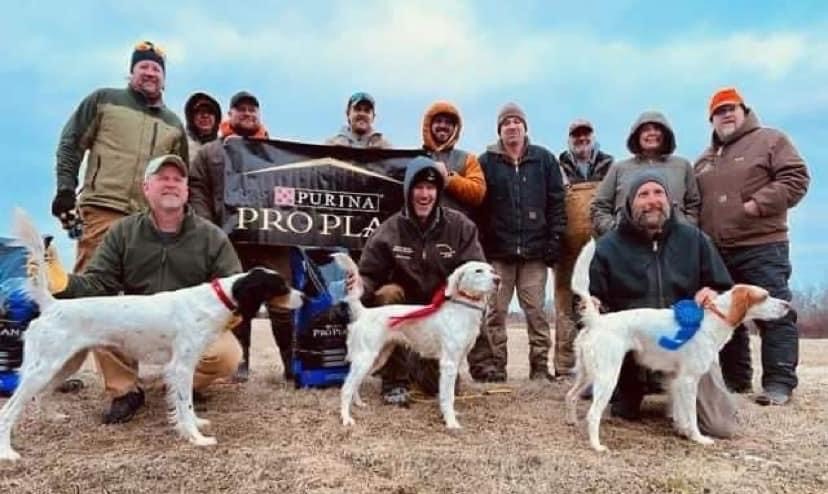 After an abnormally early spring thaw in 2021, the Minnesota Grouse Dog Association was in high hopes for the spring season of 2022'. However, after what seemed like a never-ending winter, the club was forced to cancel its first trial scheduled for April 1st due to poor course conditions. Crossed fingers and a lot of wishful thinking were rewarded for the trial on April 15-16. Although temps and wind speeds were far from ideal, the club came together and was able to put on a smooth 2 days of running with 4 different stakes and a total of 27 braces. Despite the weather all were in good spirits. It was mentioned several times this spring throughout the region that this year has had some of the biggest draw numbers ever and we were glad to see plenty of new faces in attendance.

The Open Shooting Dog was judged by Ben Mergens of Inver Grove Heights, Minn., and A. J. Kalupa of Big Lake, Minn.
First was awarded to female orange and white setter Kasida. Owned and handled by Paul Cook. "Z" had a picture perfect woodcock find early in her brace that found her pointed well off her bird. All was in order as the bird was put to flight. Z then went on to scorch the ground in search of birds with a great forward moving race and making it look easy for her handler. It was noted that she finished her brace just as strong as she started
Second place went to a mostly white setter female named Bell, owned and handled by Ed Graddy. Bell had a woodcock find in under a minute from the breakaway and showed great composure as the bird strutted around in front of her while Ed worked to put the bird to flight. When the shot was fired Bell was able to show the gallery what broke dog work should look like. Bell stayed out front for the rest of her brace hunting hard and looking fancy to secure her placement
Third place was claimed by tricolor setter male Northwoods Atlas. "Jet" is owned and handled by Greg Johnson. Jet finished his race with a clean woodcock find just 10 minutes into his run. He handled with ease, staunch on his bird and didn't track off course or get behind. Greg handled without any reservations and brought Jet to the finish line.
Mora, Minn., April 16
Judges: A. J. Kalupa and Ben Mergens
OPEN SHOOTING DOG - 1 Pointer and 15 Setters
1st--KASIDA, 1682487, setter female, by Erin's Prometheus-War Paint. Paul Cook, owner and handler.
2d-NORTHERN SLOPES BELL, 1682006, setter female, by Ponderosa Mac-Out of the Shadows. James Graddy, owner and handler.
3d-NORTHWOODS ATLAS, 1674557, setter male, by Northwoods Grits-Northwoods Nickel. Greg Johnson, owner and handler.

The Amateur Shooting Dog was judged by Paul Cook of Danbury, Wis., and Jordan Pharris of Brainerd, Minn.
Taking first place was orange and white female setter Lake Effect Allie, owned and handle by Tim Kauffman. Allie ran a nice forward flowing race and handled smoothly for Tim. She was rewarded with a nice broke grouse find to secure her win. She went on to finish her brace as fancy as she started.
Second place was awarded to tricolor male setter Northwoods Atlas, owned and handled by Greg Johnson. Jet handled easy and was forward moving for Greg. At a sharp left turn in the course, Jet's bell fell silent at good distance in good cover to the right. Both scout and handler would be needed in finding Jet who held his bird for the better part of 15 minutes. When he was eventually found Greg was able to put the woodcock to flight and Jet was steady and tall.
Third place went to another tricolor male setter. The Highway, owned and handled by Dave Moore ran a beautiful race with good forward momentum that took him to all the places one would expect to find birds. Although no birds were produced it was not due to lack of effort. Rhett finished his race forward and searching.
Judges: Paul Cook and Jordan Pharris
AMATEUR SHOOTING DOG - 14 Setters
1st--LAKE EFFECT ALL, 1688438, female, by Northern Lights Sirius-Lake Effect Tilly. Tim Kaufman, owner and handler.
2d-NORTHWOODS ATLAS, 1674557, male, by Northwoods Grits-Northwoods Nickel. Greg Johnson, owner and handler.
3d-THE HIGHWAY, 1681449, male, by Erin's Prometheus-Northwoods Carley Simon. David Moore, owner and handler. 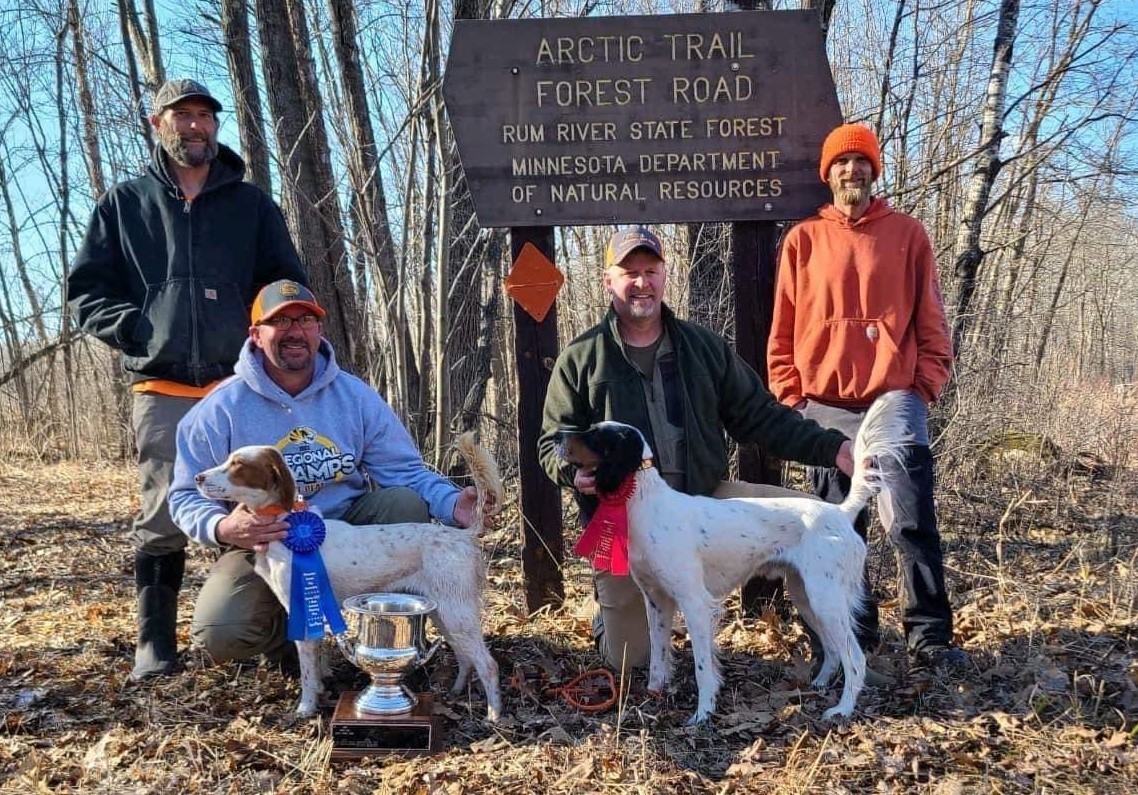 The Open Derby was judged by Chris Bye of River Falls, Wis., and by Ed Graddy of Rochester, Minn.
Black and white pointer male Chomper took first place for his owner/handler Colin Peterson. Chomper had a good looking forward race that took him to all the right places. Added to that was his easy handling leaving judges confident in their decision
Tri-color setter male Billy also had a nice race that kept him to the front and challenging his bell in search of birds, and left owner/handler Paul Bukovich with a lot to be proud of on their second place finish
Black and white female setter Rosie produced a pretty woodcock find for her owner/handler Jake Nelson and finished her brace hunting nicely to secure her third place spot.
Judges: Chris Bye and James Graddy
OPEN DERBY - 4 Pointers and 9 Setters
1st--WOODCOCK HAVEN CHOPMPER, 1699565, pointer male, by Woodcock Haven War Paint-Woodcock Haven Fire Sky. Colin Peterson, owner and handler.
2d-BERG BROTHERS WILD BILL, 1694094, setter male, by Berg Brothers Sagebrush-Berg Broters Cheyenne. Paul Bukovich, owner and handler.
3d-RISE AND SHINE ROSIE, 1694407, setter female, by Goodwing Missouri Breaks-Goodgoing Gabby. Jacob Nelson, owner and handler. 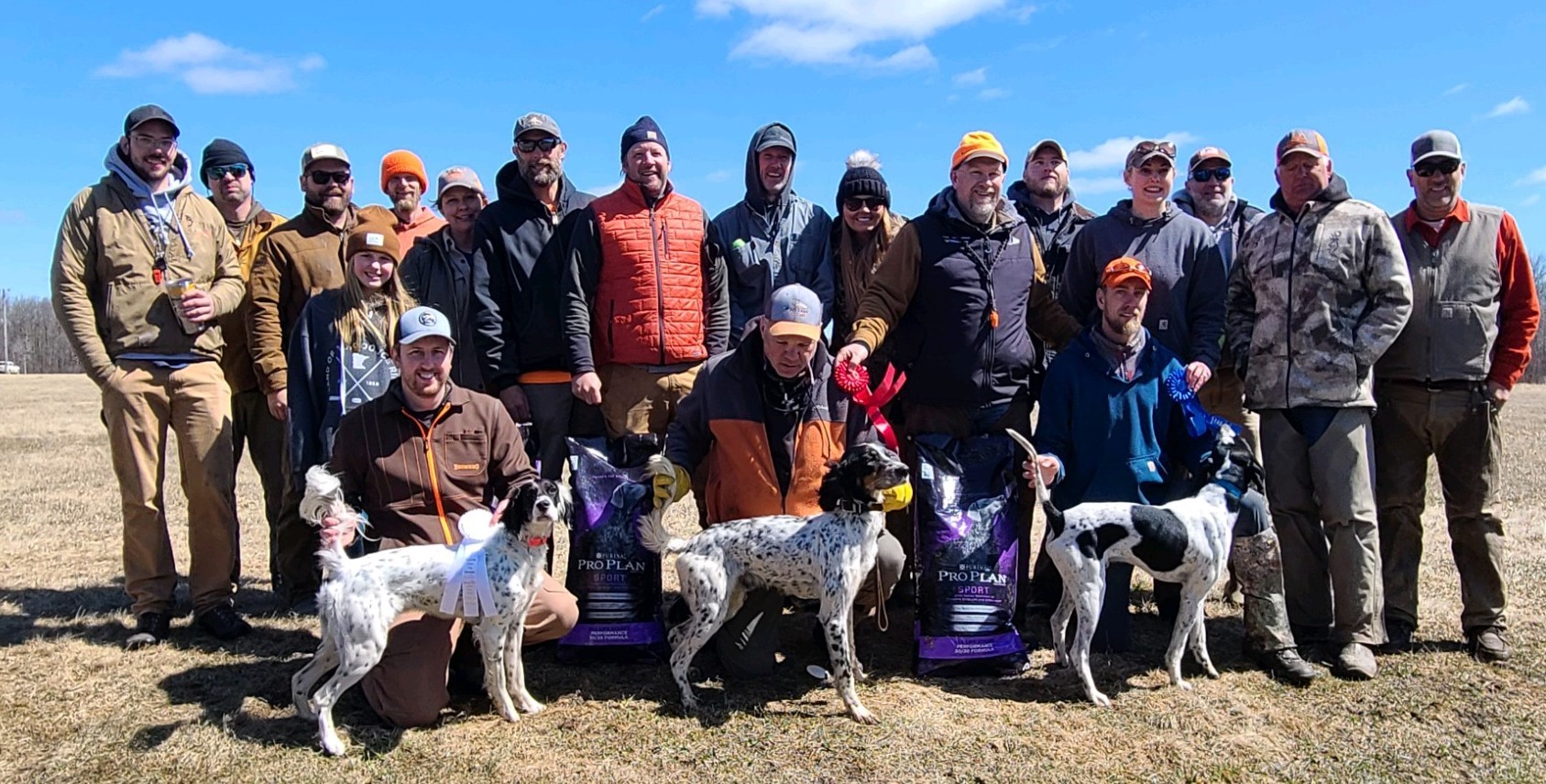 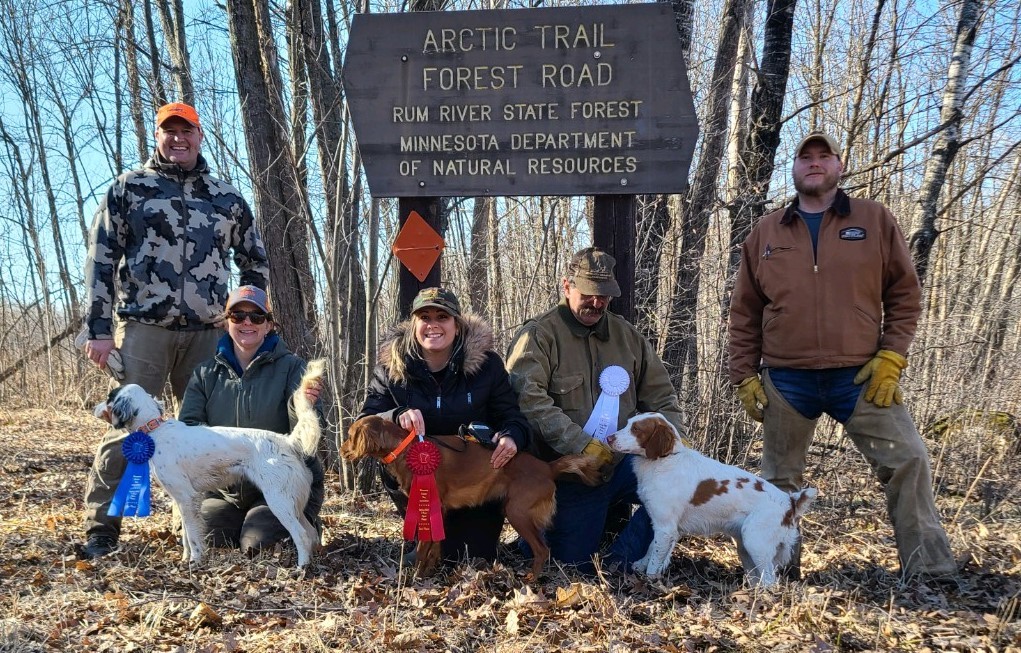