On April 3rd the inaugural horseback stakes were held at the beautiful Murphy Farm in Lake Ariel, Pa. Amateur field trialing is the life blood of the sport, kids playing and riding horses, old friends telling stories of bird dogs past and present, a welcome dinner Saturday night, and smiles by all whom attended are the reason these weekend trials are so important to the future of our sport.

David Murphy poured his heart and soul into this farm. The habitat is second to none for game birds both wild and pre-released.

The day dawned cold with light rain eventually turning into snow. What was predicted as a dusting quickly turned into a couple inches which then laid on top of several inches of mud brought on by the unusually wet spring. The conditions were tough for both dog and horse but it didn't dampen the spirit of the competitors or gallery.

The Amateur Derby was hotly contested with judges Andy Bogar and Bart Hasting having several performances to choose from. Super Storm Cliff, owned and handled by this reporter took first place honors with three well-spaced finds, mature manners around his birds and a big forward race. Second place went to Newfields Easy Rider, fancy pointer female handled and owned by Bo Mamounis. She also had 3 finds and a nice forward race. Jolene Jolene, well-built pointer female owned and handled by Dave McKay rounded out the placements with the 3rd place ribbon. She handled well for Dave and found birds two times.

The Dave Murphy Amateur shooting dog stake started as the snow started to add up. The stake was named in honor of Dave Murphy. Murph as he was often called was a friend to all he met. He spent countless hours creating habitat on the farm for wildlife, particularly bird cover and food. He is missed by all who knew him but his legacy lives on through the farm he created. His Daughter Grace is committed to keeping his vision for the farm going. We are extremely thankful for her allowing us to run trials on the farm. Bob Watts donated a beautiful rotating plaque with a silver pointer, quail and pheasant on it to the winner. We plan to honor Dave and continue this stake every year.

Andy Bogar joined this reporter for judging duties. Storm Riders Shadow put on a perfect shooting dog performance. She had, Speed, high cracking running style, always forward, handled with ease and notched 5 perfect finds to earn blue ribbon honors and the rotating plaque for owner/handler Roger Dvorak. Roger was on a roll and he handled the other dog he owns, Nottingham's Storm Warning, big strong pointer male, to 2nd place honors. He was a lot of dog for these grounds and took some handling in the corners but he tallied 5 perfectly handled finds to earn his placement. Kissamee Sweet Tea, took 3rd place honors for owner/handler Peter Labella. Daisy as she is called is breathtaking on point. Nose pointed at the sky, intensity and perfect 12 o clock tail make her catch the judges eye wherever she runs. 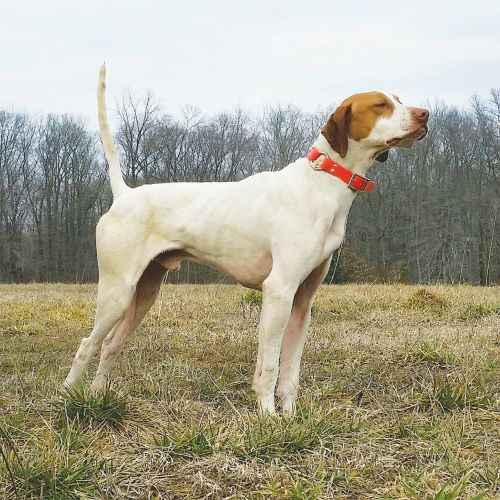