The first week of May comes fast after winter, and that weekend framework for over fifty years, marks the spring renewal at Beaver Valley Pointer and Setter Club. The "Beav" was founded in 1949, but ever since that one someone decided to run their Spring trial on the weekend before Mother's Day, that instant hit became a tradition in the making. So, the weekend before Mother's Day it is... and do as we all do here, put it on your calendar.

The stage was set for a great trial, the mowing, along with discing began early on a few of the fields. Always being careful to leave cover for the trial, inside the clubhouse was swept, plumbing after winter checked, all was done and ready for the first brace release. For the special weekend of April 30th/May 1st.

Prior to and after the ad was placed, Field Trial Secretary Norm Meeder accepted all the competitors and did the brace drawing. With over thirty-three entrants, two days were slotted for the trial.

Saturday, day 1, saw mild weather that was just right for running bird dogs, cool and just right. The first stake, the Open Puppy was judged by Justin Mason and Dave Duell, two outstanding sportsmen (as are all of the judges here this weekend). Early in the stake, Ellie May, setter female with Les Bressler, broke loose from the pack and set the standard that could not be touched. Ellie stayed in the ten to two pocket and handled as she should, searching and running big, covering all the likely objectives. Second saw Molly, setter female handled by Norm Meeder give a run for the money then she settled for the red. Molly covered most of the ground that Beaver Valley had to offer. Third place was Denver, pointer male handled by Dave Park, bumping the two top dogs, but unable to break through and past them on the winner's ladder. Denver had a well applied race.

Veteran bird planter Bob Smith was loosed and given to green light to "salt" the course.
The Open Derby had Bryant, pointer male with Justin Mason single handedly covered the ground and handled his birds well beyond derby standards, showing he was taking his training well and was ready to advance. Judges Dave Duell and Alex Meeder were happy with their selection and noted that all dogs were worthy of consideration.

The Open Shooting Dog was hotly contested, all three of the winners tallied several finds making it difficult for Judges Dave Duell and Andrew Dawson. A few other contestants were pushing the envelope, but in the end, Bull a pointer male handled by Scott Forman held the lead and never looked back. Second had Girl, a Stylish pointer female handled by Chris Catanzarite not give up easily, bolstering the judges to a hard decision. Third saw Scott Forman jump back into the limelight with Whiskey, setter male, and no stranger to the winner's circle. Whiskey is a hard running, bird finding machine. The judges commented that all three placements were well deserved and could have won anywhere that day.

The Amateur Puppy was an infield double for Ellie May and Les Bressler as she slid into second base taking home the blue once more. Judges Christy Helms and Alex Meeder were well satisfied with her performance and noted their judges' books to seal the deal.
Kathleen Carroll prepared and served the lunch at noon both days and at the end of the days running Joe Cammisa made homemade pizzas for everyone.

Day two was full of dark clouds, rainy skies, and a somewhat diminished feeling about getting wet. But to no avail, the horses were saddled, and the judges Chris Catanzarite and Andrew Dawson were on the line and calling for the first brace of Amateur Derby. Al Fazenbaker and River, his latest Red Setter phenom and gorgeous moving female came up in the last brace to topple the field. Her bird work was more than sufficient, additionally her gait and style are impeccable. June, Pointer Female with Brooke Lanning stood out for second, with her fancy and stylish ways and a nice ground application. Chet, pointer male with Tom Mains rounded out the placements, his good application and style has him pegged for the future.
Judges Chris Catanzarite and Andrew Dawson stayed right where they were in the saddle and onto the Amateur Shooting Dog. Dude with Nick Lasica put on a show, running, handling, and pointing his way into the blue ribbon.

Beaver Valley would like to thank Kathleen Carroll, Bob Smith, Deb Fazenbaker and all who helped by working and attending to make the trial the success it always is. We would especially like to thank Greg Blair and Purina for their continued support to our trial and the undying commitment they make. 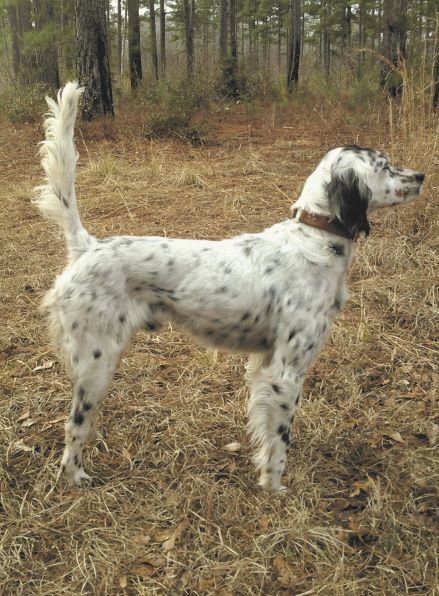