The Oregon Shooting Dog got under way May 7 on the beautiful Imperial River Ranch grounds in Maupin, Ore. We had 23 starters that encompassed various breeds including pointers, setters, German Shorthairs, Vizslas, and German Wirehaired. After two days of competition under less than ideal weather conditions, the judges Jim Wolthuis from California and Ed Woodward from Lacenter Wash., named Dunfur's Emma Frost, a German Shorthair female, owned by Clint Mathews and handled by Dan Hoke, the Champion. I might add Emma is now a repeat Champion of the Oregon Shooting Dog! The runner-up was Tian Six Shooter (Bullet), pointer male, owned by Tim and Angela Schillereff. Congratulations to the owners and handlers of these fine dogs.

The champion came from the final brace of the day. The breakaway time was 3:14. The weather had turned from not only high wind conditions but to hail and snow. Emma Frost lived up to her name and ran in the coldest and most rigid conditions of the trial. She ran a powerful forward charging race with her first find at 3:25 on the rimrocks, where all was in order. She made good ground effort and was consistently to the front. Her next find was at time where she had a big charge to the front up the hill from the green valley.

The runner-up was the bottom dog in the second brace. Bullet is a big handsome male, he ran a nice forward race and had a smooth flowing gait. His first find was at 9:46, all was in order. His next find was at 9:56 near rimrocks, he was sent for relocation which turned out a NP. He had a nice STF at 10:14 and finished the hour strong.

The first day of the trial started with winds at about 15 MPH which only gained as the day went on. The temps of 45' quickly dropped as we headed into the wind. At some point in all the braces dogs were forced to "buck the wind" and charge hard. It separated the contenders and showed which dogs were familiar with working in these conditions.

Brace 2 Top dog was a vizsla male named Red (Barget's Red Baron), handled by Gingrich. Bottom dog pointer male named Bullet (Tian Six Shooter), handled by Schillereff.
The runner-up was named from this brace and details on Bullet are listed above. Red went on point at the windmill, and all was in order. Red had a beautiful find on a pair of quail at the bottom of the green valley, all in order. Red had another find at 10:10 on a pile of feathers. Both dogs finished the hour.

Brace 5 Top dog a pointer male named Earl (Ramblin River's Natural), handled by Gingrich. Bottom dog a setter male named Colt (Tekoa Mountan Six Shooter), handled by Cochran. Both dogs had a nice breakaway. The Setter made a nice bid to the front and had the gallery sitting tall in their saddles as he easily traversed the rimrocks looking like a strong contender for the title. He continued his forward race up and over the far hill and the tracker was called for at 3:08. Earl progressed around the course hunting hard and had a point at time. His handler relocated, unfortunately no bird was produced. He finished the hour birdless.

Brace 6 Top dog GSP named Monty (Dunfur's Door Number Three Way), handled by Hoke. Bottom dog GWP named Lucy (Tumalo Griffith's Fire and Light), handled by Williams. The breakaway started at 4:07, Monty was not seen til tracker was called for at 4:30. Lucy went on point at 4:36 and all was in order. At 4:56 handler elected to pick up dog.
Day two of the trial was calling for wind gusts up to 35 MPH. The handlers and the gallery were all ready at start time to brave this cold. The day progressed and we were blessed with sun, rain, hail, snow with a side of high wind. This proved to make us all longing for sun and sandy beaches and some of the gallery riders where heard singing country western songs to keep us all up beat and in good spirits. Good times spent with good people are always a blessing, no matter what the weather brings.

Brace 8 Top dog vizsla male named Scout (CK Post Route Scout), handled by Gingrich. Bottom dog pointer female named Fannie (Elhew Charming Primrose), handled by Schillereff. 9:26 Vizsla has a STF on pair of Huns with breach of manners and was picked up, Fannie backed the STF all in order and went on. Fannie had a find at 9:32, handler elected to relocate and was given an NP. She then made a huge cast to the front where she was found on point at 9:57, handler relocated her and failed to produce a bird and was given her second NP and handler picked up. Fannie handled well, ran smooth and was very biddable for her handler.

Brace 9 Top dog Vizsla male named Oliver (Vezeto's Alpine Redemption), handled by Hoke. Bottom dog pointer male named Gunny (Twer's Hearbreak Ridge), handled by Todd Schaaf. Nice breakaway at 10:14 by both dogs. Oliver went on point at 10:30, handler produced a dead bird. At 10:35 Gunny goes on point on a nice limb find which unfortunately yielded a NP. At 10:42 Oliver goes on point again and has a NP. Gunny makes a giant cast to the front and covers the bowl well and goes on point at 10:49 yielding another NP, handler elects to pick up. At 10:54 Oliver goes on point, all in order, handler elects to pick up.

Brace 10 Top dog Vizsla female named Remi (STS Locked and Loaded) handled by Gingrich. Bottom dog Vizsla male named Pete (Lil' Red Pete C), handled by Schillereff. Both dogs breakaway into the green valley and climb far hill. Pete goes on point at 12:52, all in order. At 1:06 Pete is found on point again and all is in order. 1:24 Pete has a STF, manners are all in order. Remi climbs the rimrocks and has a STF where handler now must test both his skills and his horse as they climb the rocks to the top where Remi is found standing like a statue, all in order. Handler sends Remi forward along top of ridge and comes down side hill to valley progressing forward. Remi makes another cast to the top and handler sends scout to top where Remi is found on point. Both judge and handler now ride to the top of rock covered hill and bird is flushed and all in order. Remi finishes the hour with two spectacular casts where no other dog attempted to go. Pete has a find at time, handler elects to relocate and is given an NP.

The club would like to thank the landowners for allowing the trial the use of the grounds, Greg Blair, Purina and SportDog for their sponsorship. The many volunteers that help with bird planting, the dog wagon driver (Adam Meifert) along with Chase and Parker Cochran for the use of the side by side for the dog wagon, our lunch cooks (Amanda and Shannon Schaaf) that gave us a break and something warm to eat on those cold cold days, all the professional handlers and amateur handlers that came out and participated in the Oregon Shooting Dog. Without the multitude of volunteers and sponsors these trials would fail to carry on. We thank you ALL again for everything you do and have done to support this event.
Maupin, Oreg., May 6
Judges: Jim Wolthuis and Ed Woodward
OREGON OPEN SHOOTING DOG CHAMPIONSHIP [One-Hour Heats] - 7 Pointers, 1 Setter, 7 German Shorthairs, 5 Vizslas and 3 German Drahthaars
Winner-DUNFUR'S EMMA FROST, 1651022, German Shorthair female, by Dress Blues-Dunfur's Tule Moon. Clint Matthews, owner; Dan Hoke, handler.
Runner-Up-TIAN SIX SHOOTER, 1679332, pointer male, by Gator Done-Tiana Shooting Star. Angela Schillereff, owner; Tim Schillereff, handler. 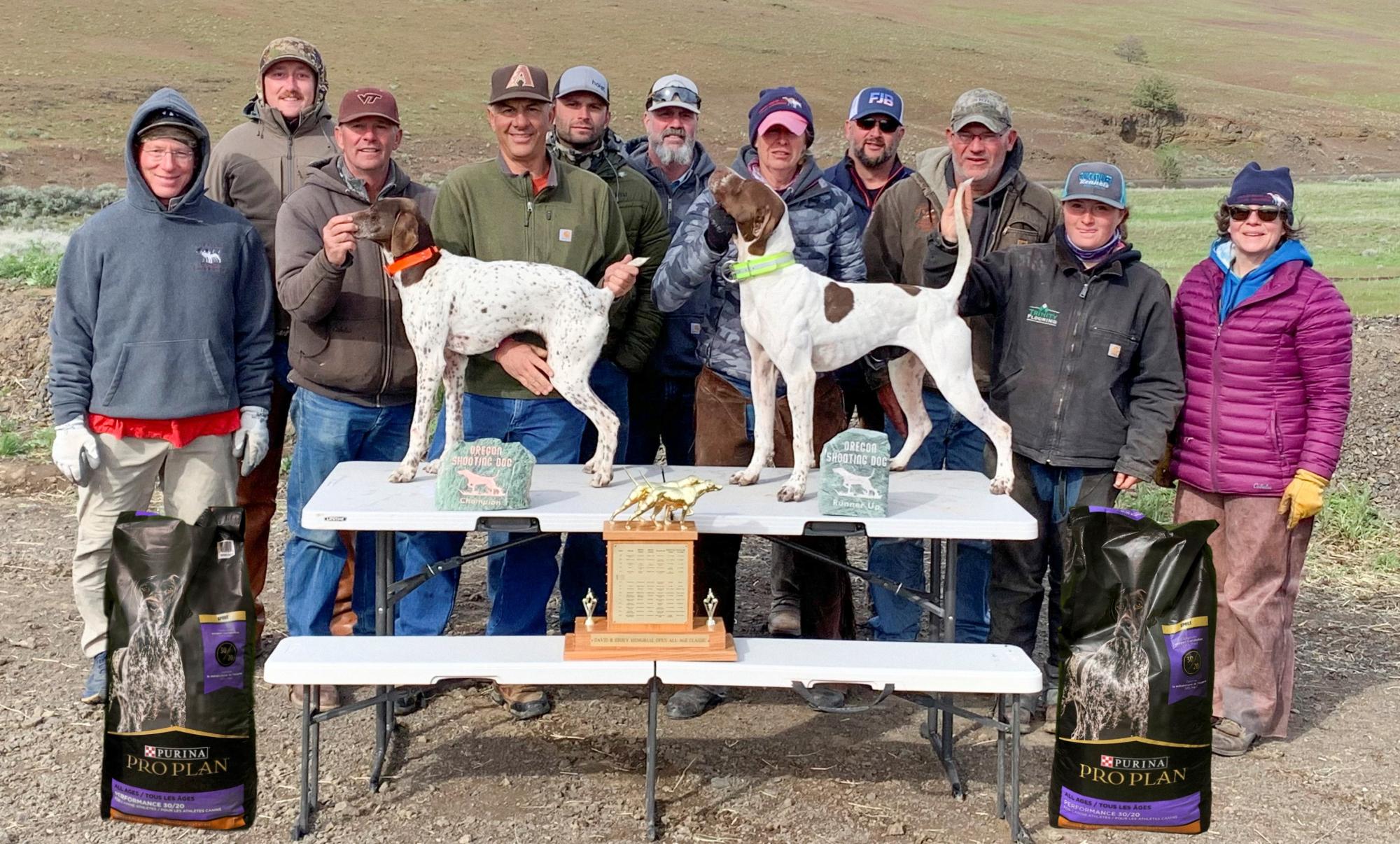