The English Setter Club of America conducted its sixth annual special Lee Bird Classic end of the field trial year trial over the weekend of May 12th to May 16th on the club's historical grounds at Medford, New Jersey. The trial drew a very good entry with a full slate of running each day.

The weather man had predicted some thunder showers over weekend with the increasing warmer temperatures, but it turned out to be pretty nice but getting a little warmer each day during the running and all the club program and festivities went off without much of a hitch. This trial is a sort of celebration of another year of field trialing which gets together all the English Setter Club of America members (both who are owners of continental dogs and American Field) plus friends to run dogs together and enjoy each other's company both running good dogs and enjoying great food and saying thanks for the sport we all love. I believe all enjoyed themselves and had a great time winning some stakes and taking some prizes home along the way, besides the great food served up by Nancy and Karen Lordi during the day and each night of the trial.

The club would thank Karen Lordi and John Frank for co-chairing the trial this year. The club also thanks Stacie Goodie, Matt and Norman Basilone, Louise Wilcox and others for their help with this trail. Also, a special thanks to our bird planters for doing an excellent job and to our Professionals, Matt Basilone and Mike Tracy for their continued support. It was some of a big effort and thanks go to all for another successful event.

The club would also like to thank Purina and the many sponsors that donated to make this trial a great event. Especially Purina for supplying dog food to all the winners.
We had a great slate of judges for this trial. The club thanks all of them for their work and time in the saddle and their decisions were well received.

THE WINNERS
Smoke "N" Mirrors, white and liver pointer female, owned by Stacey Goodie of Tabernacle, NJ. and handled by Stacey had a standout performance to win the Amateur Shooting Dog stake over strong field of local competition. Frankie scored nicely on several stylish polished finds coupled with a showing it off big edge running strong forward race. Limbsmoke Skeet Rock, setter male, owned and handled by your scribe of Bensalem, Pa, had a real nice performance of his own with two of his real standup style on point finds and a very good classy race with strong going away finish to take second. Storm Rider's Shadow, white and orange pointer female, owned by Roger Dvorak and Gordan Ramsey of Elkton, Md. was third. She had some real good bird work and great forward race to gain nod this day. It was a good stake with many nice efforts.

Concluding the running Sunday was the Amateur Derby stake. Newfield's Easy Rider owned and handled by George (Bo) Mamounis of Newfield, NJ. won the stake with a very good performance. Sandy, a pointer female, ran in the very first brace and scored nicely with numerous stylish finds and a good forward race. Taking second was Ravenwood's All Rise, a pretty moving pointer male owned by Joseph Cincotta of Stockton, NJ. and ably handled by Marcus Ramseur. Riser ran an impressive forward race and had one nice stand. Third went to Erin's Known Agenda or Tucker as he is called, pointer male, owned jointly by Richard Gillis of Minnesota and Karen Lordi of Tabernacle NJ. and capably handled by Stacey Goodie. Tucker had a real good one find effort and a back of bracemate. His race was a nice forward hunting effort.

The Open Shooting Dog started things off on Monday morning. Taking first place was Harbor City Sure Shot, pointer female, owned by Richard Gillis and Karen Lordi and handled by Matt Basilone. Sadie ran in the ninth brace and scored three times on quail, plus a back of bracemate, coupled with an attractive classy wide forward race. Second was Iron Bully, pointer male, owned by Muriel and Bill Primm and Ernie and Karen Saniga and handled by Mike Tracy. Bully had two nice stands and a good edge running application on the ground. Third went to Fork River's Lucky Charm, white and black setter male, owned by Gary Taveras of Massachusetts. Reggie as he is called had also two finds on quail and a nice reaching forward race to gain the final spot this day. There were numerous others with some good efforts.

The final stake of the trial was the running of the Open Derby. The winner was Waybetter Rebel, pointer male, owned by Muriel and Bill Primm and handled by Mike Tracy. Rebel was a standout on quail scoring six times coupled with a good forward race. Taking second was Trumped, pointer male, owned by Eli Richardson of Uxbridge, Ma. He also was handled by Mike Tracy. Trump had three nice finds and a real good race to front. Iron Will's True Grit, pointer male, rounded out the placements with third. Grit ran a nice classy race and scored on one real classy find on quail. Grit is owned by Robert and Lisa Brooks of Hammonton, NJ. and ably handled by Matt Basilone. It was a good derby stake and it will be interesting to see how these young dogs mature and develop in the fall on into the future.

(Note: The Lee Bird Open Shooting Dog Classic (a special event for club members only) to be run on Saturday was not run this year for first time due conflicts with other trials on that day. We hope to work out these kinks next year. The Open Restricted Shooting Dog was cancelled.) 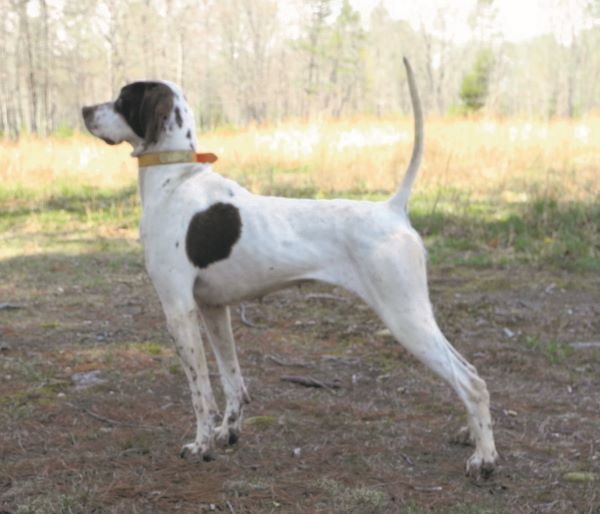