Submitted By: David A. Fletcher 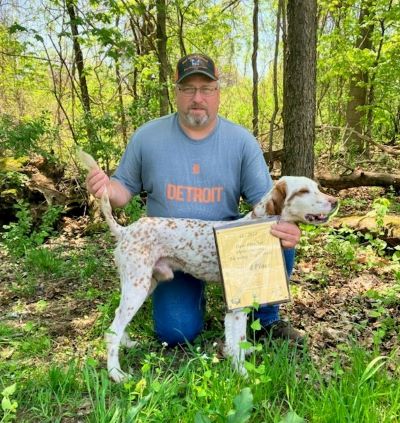 The Wolverine Bird Dog Club, with more than a 40-year history of holding open country field trials over Southern Michigan venues held forth over good courses at the Highland Recreation Area, near Milford, Mich., May 14-16. with their Spring 2022 program. Three walking stakes, Open Puppy, Open Derby and the Fletcher Open Walking Shooting Dog Classic were offered, and additionally three Horseback stakes followed, Open and Amateur Shooting Dog and Open Derby. The Fletcher Classic had a gratifying entry of 30 dogs. The event, with a total of 77 entries in 6 stakes, was completed in the two weekend days.

Weather was a major factor for this trial. Temperatures were just over the eighty mark both days, with thunderstorms and lightning on Saturday with intermittent showers, and the lightning halted the running for a short period. Both days had a scorching sun, making things a bit too hot for the dogs, although there were several places along the course route with water containers in place where a dog could be immersed. Scenting seemed affected by the heat, and considerably more difficult than during the previous weeks over this venue.

This trial was well managed by a group consisting of club President Jim Cipponeri who marshaled, acted as stake manager and also planted a few birds. Jim's wife Connie again used her excellent hand printing for the running order sheets at the drawing. Major bird planter was Paul Tutro who worked hard at his task two full days, and rode his own horses. Bryan Wood faithfully read the starters at the line every brace. Secretary Fletcher collected the entry money, wrote the checks for purses and other matters and acted as trial reporter. Morning donuts came from Paul Tutro and Robert Ellis. Help came from others, Mike Brown who went to Milford Saturday and brought sandwiches for the attendees. On Sunday Greg Tereck, a long time Michigan trialer, now on crutches, came with his bride "Scottie" and furnished Subway style sandwiches, and other goodies for the group. Rich Hollister filled in for reporter/photographer Fletcher when his camera showed memory full. Pictures for this report were taken from what sources were available and not all stakes had a salvageable picture.

Judges for the Fletcher Classic were John Hall of Dexter, Mich., a long time Brittany trialer and very active with all the local Brittany events. Will Langley, in addition to providing the horses, judged with John Hall in the Fletcher Classic and both were experienced and attentive to the entrants. Also judging were Rich Hollister and son Ricky, Sandy McLean, Mike Brown, and Bill Klenner.

We again extend our thanks to Purina for their support.

THE FLETCHER CLASSIC
An entry of 30 competitors gave some importance to the stake among walking handlers. It was not a good day for scenting or multiple bird finds, and heat in the eighties was a deterrent to good scenting. The winners stood out and earned their placements. Judges related the winners all had superlative hunting, handled well and worked the front of course. Birdwork was with style and intensity and good manners at flush.

Quick (McLean)-Sage (D. Hughes). Another pair that hunted hard and forwardly. Quick pointed at 8, was not mannerly at flush and was up. Sage had a pair of mannerly finds at 12 and 29.

Rumble (Hollister)-Ramapo Doc (Ecker). Hard hunting dogs, no birds, and Doc was taken up near time.

Shooter (DeLong)-Sass (M. Hughes). Another pair that hunted hard without finding birds It was evident scenting might be very difficult.

True Grit (Ecker)-Lucky (D. Hughes). Grit was taken up on a second unproductive. Lucky missed a back and was also leashed.

Spec (M. Hughes)-Dolly (Cook). Great hunting by this pair. Spec was birdless and Dolly logged a stop to flush.

Luther (Brown)-Meg (Colgazer). Luther ran well, had a very stylish find and finished well. No report from judges on Meg.

Bo (Ecker)-Mickey (M. Hughes). Bo hunted well, but was birdless. Mickey had a very stylish find and searched the course in great fashion.

Annie (Renius)-Angel's Envy (Wheelock). Annie was very wide the initial 15 minutes. She logged a great find at half time then shortened up a bit in the latter minutes. Envy had an excellent hunting effort, pointed in great form moved on her bird, and was ordered up.

Rye (Gomes)-Larry (Hollister). Rye scored an unproductive, had no other birdwork and hunted with excellence. Larry was the third place dog with two finds, two backs and a very level, forward hunting search.

Lola (Munden)-War Paint (Ecker). Lola hunted well and logged a stop to flush. War Paint was the second place dog and hunted the front of course exceptionally well and had a pair of excellent finds.

OPEN WALKING DERBY
An entry of 17 young hopefuls made it a good 'glimpse of the future stake". Judges reported all placed dogs had birdwork and gave indications of their potential as Shooting Dogs of the future.