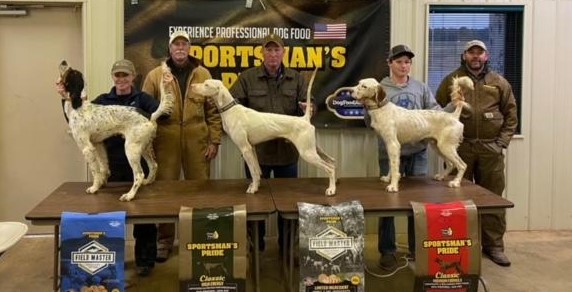 "I've seen fire and I've seen rain. I've seen sunny days . . ." Sounds like a song. Throw in smoke, wind and snow and a wide range of temperatures and you have the weather conditions for this year's Mid-South Field Trial Club renewal at thenHell Creek WMA in Blue Mountain, Miss.

The trial began on Friday, February 11, following the completion of the Alabama Open. Warm Temperatures mid-week prompted state officials to do a little early burning on the field trial courses. As gusty winds picked up throughout the day, all the fire and smoke safely came to an end. With the approaching cold front came the overnight rain; frigid temperatures and even hard blowing snow flurries on Sunday. You just can't make this stuff up. With the myriad of conditions, pointing quail was a challenge.

THE WINNERS
In the Shooting Dog Stake, J Maple Jester owned by Joe and Tessa Hughes took first place honors while her kennelmate J Maple Lucy took second. Jester was credited with two finds in her hour and Lucy shown on quail once. Both of these dogs have been consistent winners this season and deservedly so. Taking third was Game On for Joe and Kent Walker. The coming nine-year-old pointer laid down and extreme and well-handled ground race but was bird less in his effort.

The Derby saw some really good performances. Winning the Derby was Shearjoy's Triple Threat for Betty Shearouse. "Trip" ran the country to the limits and recorded a find near pickup on a wild covey. Taking second honors was Chris Cagle's outstanding youngster. Haney's Storm Warning. Storm Warning ran a strong forward and responsive ground race in his efforts. Third place laurels went to Shagtime Buck, also owned and handled by Chris Cagle. Buck, like the other winners, showed all-age potential in his ground race.

Small's White Stryker won the All-Age competition for Mike Small of Evansville, Ind., with a strong ground race on the third afternoon course and carded one outstanding find under challenging and adverse weather conditions. Second place went to Rebel Survivor for David Williams. "Solo" also recorded one find in his hour to go with a smooth and forward race. Taking third was Small's White Charger for Mike Small. Charger ran anextreme forward race but was bird less in his effort.