Early morning on Friday, September 23rd, the first walking trial in several years started on the Namekagon Barrens, located in the rural Northwest corner of Wisconsin. The Chippewa Valley Grouse Dog Association had been the host club for previous trials on these hallowed grounds. Due to several factors, it had not been feasible to accomplish a trial since Covid-19 started. A small but determined group was keen to ensure that walking trials continued on these grounds. Probably taking more time and dedication than anyone anticipated, this not-so-small task was handled exceptionally well by all involved. The National Bird Hunters Association and the Chippewa Valley Grouse Dog Association teamed to form the NBHA Sharptail Championship. The success of this trial will no doubt make this a critical event, with many already planning the return trip next year.

Part of the reason for this effort is just how special these grounds are, as not many grounds are suitable for a walking wild bird trial. The Namekagon Barrens Wildlife Management Area strongly focuses on Sharptail Grouse habitat and management. Property manager Nancy Christel has put countless hours and resources into this property. The Friends of The Namekagon Barrens group has helped in many ways with improvements over the years. We are proud that our efforts with this trial have allowed us to make a generous contribution to the Friends Group.

Some may say a trial is only as good as the judges. So, we felt fortunate when we were able to secure the services of two very well-respected individuals. Mary Sue Schalk traveled from Princeton, Kentucky. Bird dogs and field trials have always been a part of her life. Among her many judging assignments, she previously judged the Region 19 Amateur Shooting Dog Championship on these grounds and was enthusiastic about returning. Steve Snyder of Ellendale, Minnesota, is probably best known for being the owner of CH Ponderosa Mac, but his resume doesn't start nor end on that one dog. Steve has been an active dog man for decades and has many other champion grouse dogs before and after Mac. Both judges worked well in the saddle for four days and agreed every step of the way.

Numerous sponsors helped make this event possible. We were even fortunate to have a couple of representatives on hand, Greg Blair of Purina and Ben Brettingen of OnX. The NBHA Sharptail Championship cannot understate Purina Pro Plan's generous support, and its contributions continue to help the field trial community. OnX supplied gifts for both the winners and judges. The championship winner received a Garmin Watch, while the runner-up received a collar gifted by Garmin. Gun Dog Supply provided several gift certificates to exhibitors.
Drawing participants from no fewer than eight states, 46 out of 48 dogs drawn for the championship started and 23 out of 24 for the companion open derby stake. Participants made many new acquaintances. Many times, individuals offered help before they could make introductions. The sportsmanship of this trial cannot be understated. We hope to continue and even improve this practice every year. We want to thank all those involved; naming every individual would be impractical as everyone chipped in when help was needed.
Taking home the top honors in this newly formed NBHA Sharptail Championship was John McKellop of Guys Mills, Pa., with his female pointer Grouse Trails Warrior Cat. Runner-Up was Ian MacTavish of Afton, Minn., with his female setter Cold Creek Belle. Other dogs that got the judges' attention were, Fast Money with Justin Crook, Grouse Trails Firestorm with John McKellop, and Cold Creek Uncle Sam with Ian MacTavish.
The Championship Winners
Grouse Trails Warrior Cat (McKellop) ran on the last day of the trial. She suffered an early unproductive in a likely spot at 13--her ambitious way of going caught the judges' attention early. At minute 27, her bracemate elected to pick up, giving Warrior Cat the course. She took full advantage going on a bird-finding spree. She quickly had two coveys at 47 and 55, just on the south side of St. Croix Trail. She followed it up with a find on a single at 58.
By contrast, runner-up Champion Cold Creek Belle (MacTavish) ran not only on the first day but the first brace, setting the bar early. She worked with enthusiasm her whole hour. At 34, she was seen standing, and as the handler was approaching, a single was seen lifting; Belle was still standing as the handler finally reached her and had a second Sharptail lift. All was in order. At 39, she had a divided find with her bracemate on a large covey. She put a third piece of work in the books at 52 when she handled yet another covey.
Danbury, Wis., September 23
Judges: Mary Schalk and Steve Snyder
NBHA SHARPTAIL OPEN SHOOTING DOG CHAMPIONSHIP [One-Hour Heats] - 26 Pointers, 17 Setters, 4 Irish Setters and 1 German Shorthair
Winner-GROUSE TRAILS WARRIOR CAT, 1690752, pointer female, by Panola Bacon-Chasehill Little Izzy. Laurel A. & Patricial L. McKellop, owners; John McKellop, handler.
Runner-Up-COLD CREEK BELLE, 1695059, setter female, by Erin's Blew By You-Stumbo's Grace. Ian MacTavish, owner and handler.
Open Derby Winners
Todd Manns of River Falls, Wisconsin and Ben McKean of Minnetrista, Minn., stepped in to watch a very talented batch of derby dogs. The derby stake ran on the same continuous courses as the championship. Little Hawk (Cook) took home top honors in the derby stake. She showed maturity in her application, filling the grounds at every opportunity and showing she had a purpose. Second was Grouse Trails Black Knight (McKellop), son of the newly crowned champion, who put down a big and very forward race. Handling well and showed a connection to his handler. Third was Pokegams Winnie (Golat), a stylish female, showing a very consistent and purposeful race by being in all the right spots. 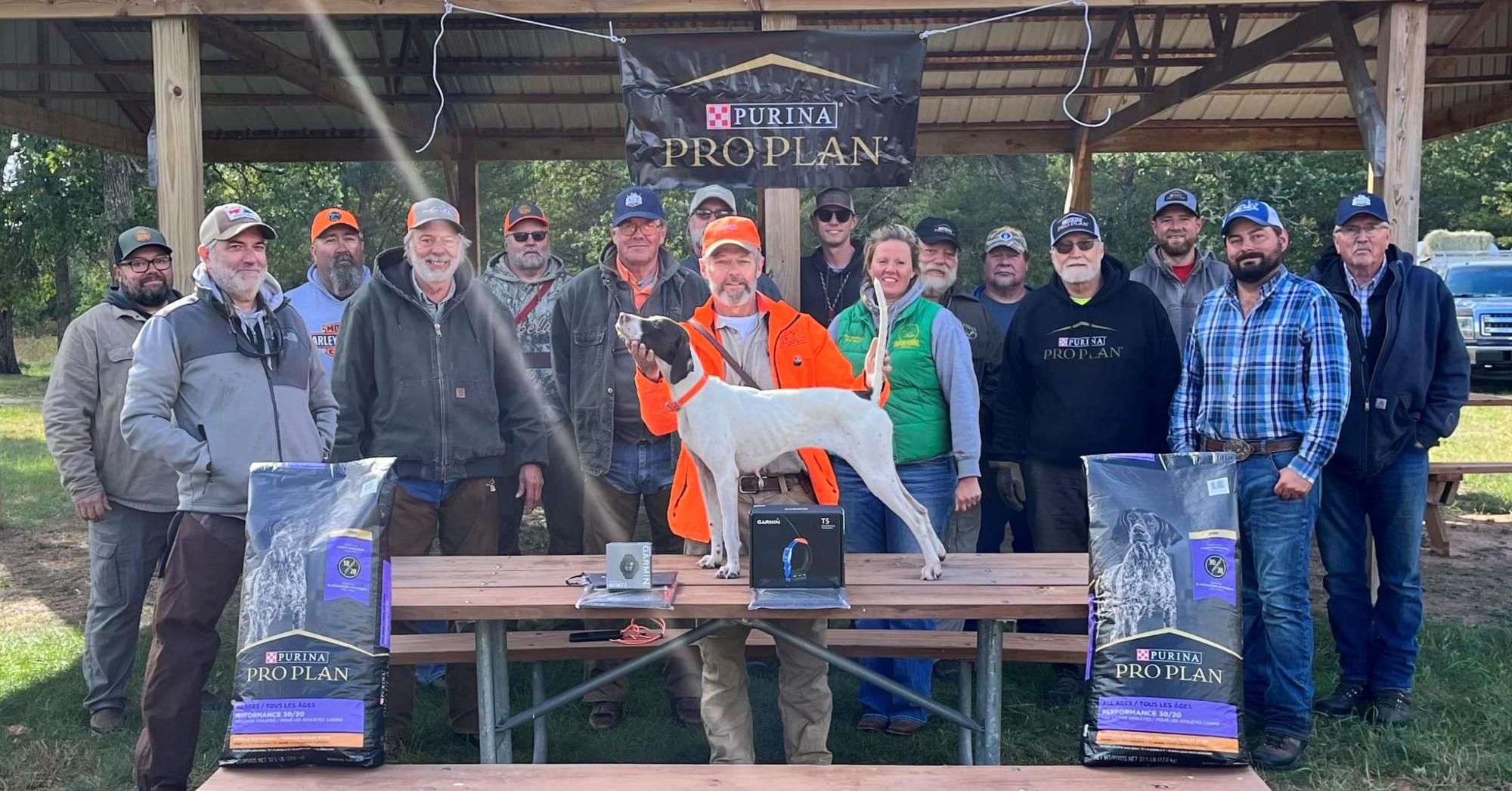