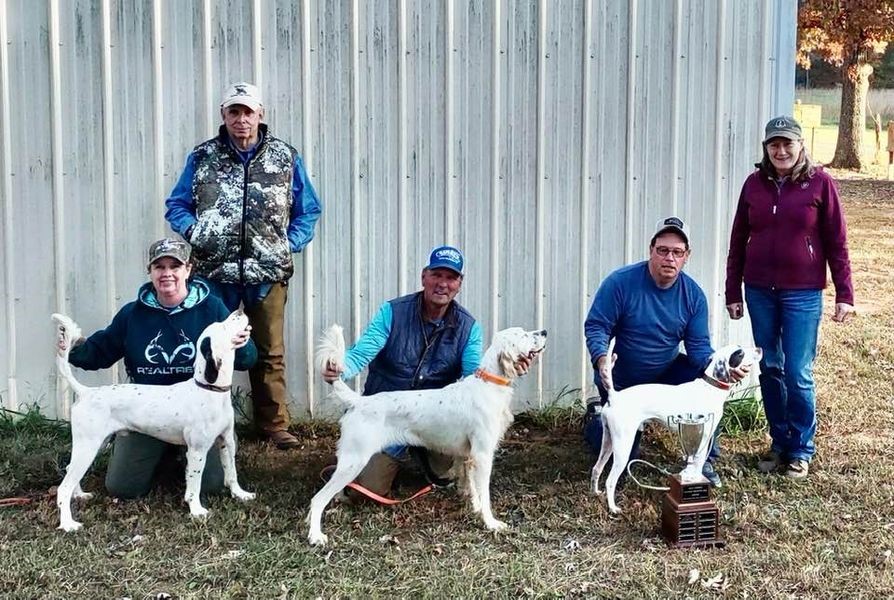 We held our fall trial this year at Slate River Farm at Dillwyn, Va., in Buckingham County. Our judge panel this year consisted of Phil Rutter, Grace Ann Lawson, Sharon Townley, Jim Jones, Ashby Morgan, and Lee Flanders. All of these folks have vast experience bird hunting, judging and handling dogs in both walking and horseback field trials. We thank them for judging for us and for their decisions which were well received!

The grounds at Slate River are as nice a set of grounds as you can find in the area and provided nice courses for both our walking stakes and our horseback stake.

We thank the many folks who helped with the many tasks that it takes to put on a successful trial. Sharon Townley served once again this year as our chairman. This trial truly could not happen without the many tasks that Sharon tended to. Thank you Sharon! Danny Gooch planted all the birds, Waverly Coleman Drove the pick-up that pulled the gallery wagon that was furnished by Pat Brooks. Stevie Graham helped with the driving of the dog wagon and Judy Jones fixed a delicious lunch both days.

On Saturday we ran our U. S. Complete walking Puppy, Derby and Shooting Dog

The Derby had only three entries and was topped by Lee Flanders's pointer female, "Dot". Dot had a wide race to the front with many shooting dog finds with extreme style. Stevie Graham's setter female "Suzie's" race was wide with finds with derby style. She was a little hard handling but finished to the front handing and was placed second. "Fred", Joanna Yeoman's Brittany ran a moderate race with derby style bird work and took the third place spot.

The Shooting dog stake had 16 entries and was won by "Jake", Jimmy Crandall and Mitchell Forrester's pointer male. He had a strong, searching, forward race with 2 finds, one divided find and an unproductive. "Jake" was all style on the ground and around his birds. Second went to Ashby Morgan's "Speck". "Speck" scored 5 times on birds. He is a stylish, mostly white first year shooting dog and his race was to the front. Sharon Townley finished out the placements with her setter "Blake" in third. "Blake" had two finds and exhibited good manners on both. His race was searching and consistent.

First in the stake was a setter male under the whistle of Sharon Townley, named "Ruger". "Ruger", a setter male had a strong forward race with a back at 18. At 20 he had a nice covey find with birds getting up all around him. He continued on to the front with finds at 25 and 28. Pete Delcollo's male pointer, "Bull" had a nice forward race with 2 finds and finished strong. He was named second place dog. Rounding out the placements was Grace Ann Lawson's pointer female "Stevie" with finds at 8, 12, 20 and 25, however she was not as good on her birds as the others.

Your reporter thanks Ashby Morgan for his help in providing his observations of the horseback shooting winners.

The Chickahominy Field Trial Association sends out a big THANK YOU to all those who supported our silent auction! The funds raised are a big help to our efforts to continue to put on our trial. Plans are under way for our spring trial and we do hope that you will be able to be with us!
Dillwyn, Va., October 29 - One Course
Judges: Grace Ann Lawson and Phil Rutter
AMATEUR PUPPY - 5 Pointers and 1 Setter
1st-BEECHWOOD I GOT THIS, 1701218, setter female, by Rutter's Lone Ranger-Black Water Lady. Sharon Townley & Howard Schultz, owners.
2d-TENACEE NUFF SAID, 1701536, pointer male, by Tenacee Franklin-Ringo's Sweet Heart. Greg Isenburg, owner and handler.
3d-BOB'S GRAY STREET MACY, 1702075, pointer female, by Touch's Grey Street-Bandit's Hill Lady. Bobby Phillips, owner and handler. 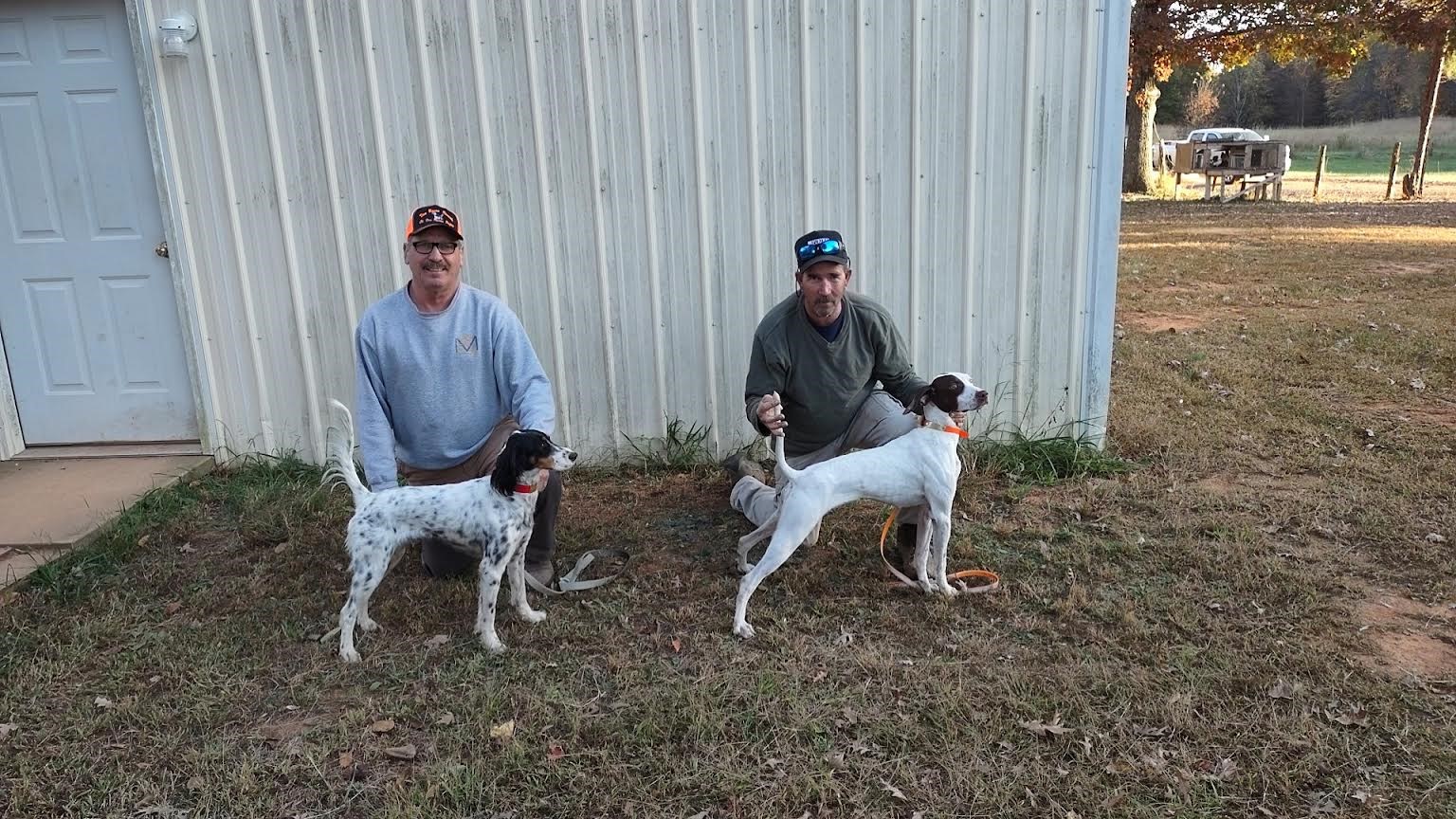 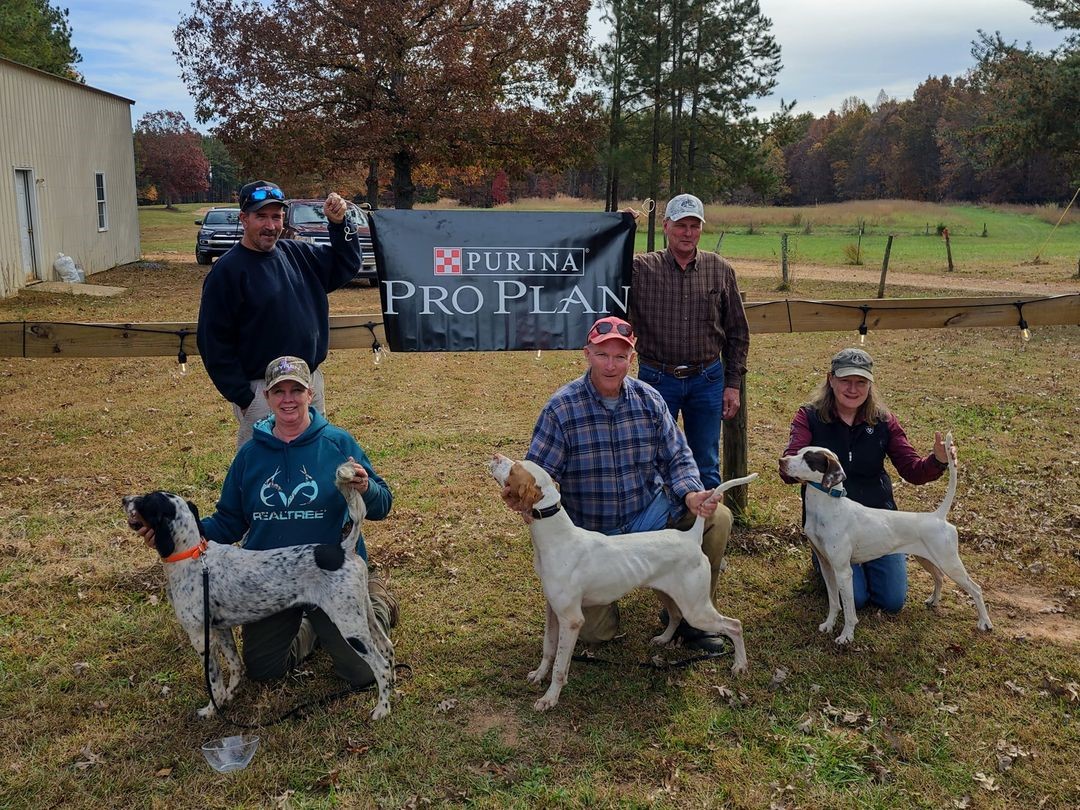