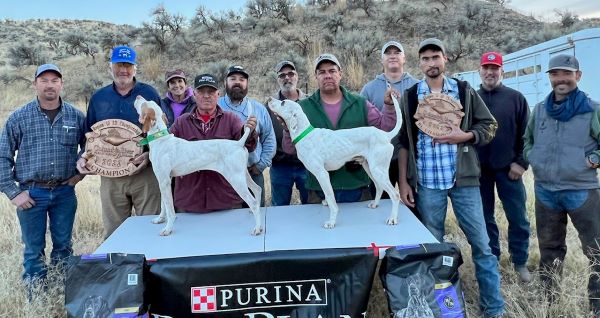 The Columbia River Field Trial Club kicked off their Championship series on October 29th. This would be the first time the club held a trial on grounds other than the Buckhorn Ranch since 2009. We appreciate Chuck and Kara Kunde's generosity and commitment to opening their ranch up for our sport all those years.
The difficulty in setting up new grounds cannot be taken lightly. First and foremost, the club searched for grounds that would hold a significant population of wild birds. Nothing proves a championship dog quite like wild birds in this scribe's mind. Just having a wild population isn't the whole story.
The grounds must lay as such to give ample places to show a dog and have locations for extraordinary dogs to shine amongst their competitors, yet still provide safe paths for the safety of horses and their riders. Next the grounds must be accessible to provide amenities such as: porta johns, water for animals, and places to park large LQ horse trailers with ample room to stake out horses, as well as the ability to retrieve and drop off dogs with a dog truck. Lastly, the grounds would ideally be in a location that is centralized for competitors and close to hotels and restaurants for those people with smaller setups such as the amateurs and beginners, which ultimately will provide the lasting support our sport needs to survive.
We found those grounds under the stewardship of the Gary Hess family and McBride Hereford Ranch. Grounds with ample wild birds, yet accessible enough to salt the courses with liberated birds, and terrain that wasn't so harsh as to provide undue hazards for dog, horse, and rider. Grounds with enough acreage to lay out multiple courses with ample room to show a dog, yet with challenging turns and locations that would ultimately prove the ability to handle and maneuver a Championship worthy Shooting Dog in their quest for birds. I go back to an article published by Tom Word titled "T. J. Jack and Ted at the Florida Championship." In that blog, it is stated that Chinquapin would be an ideal trial location. "These lands are ideal quail habitat and are especially suited to the purposes of showing a class dog. They are of a rolling contour, thinly scattered with pine and scrub oak trees, a clump of palmetto here and a group of Chinquapin there, with feed patches of several kinds of millet, corn, beans, indigo and benne scattered throughout." Yet as ideal as those grounds proved to be, Hall of Fame inductee Fred Arant, complained bitterly at the lack of a definitive layout of the courses. Ted Baker heard him and was incensed. He sent club Vice President John Murphree to order Arant off and refund his entry fees. Arant immediately apologized and offered to stay over after the trial and lay out and mark the courses. Even grounds as hollowed as Chinquapin got off to an un-auspicious start. What could we expect?
REGION 10 AMATEUR SHOOTING DOG CHAMPIONSHIP
Region 10 Amateur Shooting Dog Championship drew 14 dogs for the inaugural running on the McBride Hereford Ranch. We were honored to have judges Brandy Gilmore from Kallispell, Mont., and Tim Robertson from Parma, Ida., watch over the dogs. Brandy brought fresh perspective as he recently moved up from Alabama, where he has scouted many Champion dogs over the years in that Region. Tim also brought his skilled view, having trained dogs professionally for decades with his father, brother, and sister. Multiple Wild California Quail and Hungarian Partridge were pointed or rode up on each course. The liberated Chukar provided ample opportunity for multiple pieces of bird work for each brace. Yet stirred debate amongst the gallery if the birds being worked were wild or pen raised, as the bird were superb! Many dogs finished the hour with finds to their credit and worthy of a Championship title. Ultimately, the judges used the dogs with the cleanest hour runs, free of any smudges on their notebooks. Simply counting finds wasn't on the judge's radar, but dogs that navigated the courses with minimal scouting and extraordinary bird work. Named Champion from the 3rd brace was S B Always Dreamin. Pointer female owned and handled by Bill Owen of Santa Barbara, Cal.
Named runner-up from the 4th brace was Touch's Jimi Thing. Pointer male owned and handled by Chris Perkins of American Falls, Ida. Congratulations to the winners.

Columbia River Bird Dog Club Open All-Age Derby drew 8 dogs. We ran the All-Age Derby course directly behind camp on grounds we hope to hold an All-Age Championship on someday. The grounds do not provide access with a dog truck currently, therefore we ran a single course for the Derby, giving the wild birds a break on the Shooting Dog course to settle down into their normal routine for the day. Judges for this event were Alex Rickert of Bozeman, Mont., and Matt Huston of Kennewick, Wash. It was great to have Alex on the grounds to pair with Huston's experience as an owner and amateur handler of champion dogs. Alex has trialed from the piney woods to the prairies, as an amateur, and he is the owner of multiple top all-age dogs on the major open circuit. Multiple derby dogs showed they were worthy of a placement. First place was awarded to Mauck's Wyeast Molly, setter female, owned and handled by Alex Mauck of Ontario, Oreg. Second place was Perkins Diamond Cutter, pointer male, owned and handled by Chris Perkins of American Falls, Ida. Third place was West Mountain Speed Wave, owned by Kim Sampson of Santaquin, Utah, and handled by Rich Heaton of Boise, Ida.
Alderdale, Wash., October 29
Judges: Brandy Gilmore and Tim Robertson
REGION 10 AMATEUR SHOOTING DOG CHAMPIONSHIP [One-Hour Heats] - 10 Pointers and 4 Setters
Winner-S B ALWAYS DREAMIN, 1679869, pointer female, by Rivertons Funseek'n Scooter-Touch's J Class. William Owen, owner and handler.
Runner-Up-TOUCH'S JIMI THING, 1692245, pointer male, by Touch's Grey Street-Hailine's Silver Star. Christopher Perkins, owner and handler. 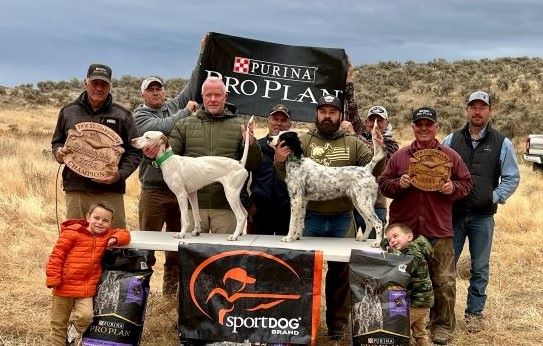 PACIFIC NORTHWEST OPEN SHOOTING DOG CHAMPIONSHIP
The Pacific Northwest Open Shooting Dog Championship drew 11 dogs to conclude our Championship series. Judges were again Brandy Gilmore of Kallispell, Mont., and Alex Rickert of Bozeman, Mont. This pairing had not judged together previously, therefore, one could not accurately guess as to their preferences. The individual skillsets and perspectives they brought to the judging position, assured the best performance would win. The fears of significant number of birds moving off course was quickly laid to rest as there was bird work in every brace that finished the hour. Judges again used the advantage of having courses that proved the handler's ability to navigate their dogs with ease, yet still fill up the country in search of their game. Excellence for the full hour was awarded over counting finds. Named Champion was Miller's Newest Version, pointer female, owned and handled by Bill Owen of Santa Barbara, Cal. Runner-up was Mauck's Wyeast Owyhee Dallee, setter female, owned and handled by Alex Mauck of Ontario, Oreg.

In conclusion, I would like to thank all the participants that entered our trial. Being the grounds were new, you had no idea what you were getting yourself into. Thank you, Gary Hess and McBride Hereford Ranch, for the opportunity to showcase dogs on your grounds, it is a benefit for all of us that love the sport. I'd like to thank the judges that traveled many miles to sit in the saddle amongst the dust, wind, and rain just to likely have their opinions ridiculed. It seems like a thankless task at times, but without knowledgeable judges that know how to differentiate between a good and a great performance, our dogs and expectations of them will regress to average. We can have all the entries in the world, but without grounds and judges, it's all for not. As always, thank you to our sponsors Purina and SportDog. Their generous contributions are always well received and appreciated. For me personally I'd like to thank Jerry Fitzgerald and Mercer Farms for their help and generosity. The amount of behind the scenes work and effort does not go unnoticed. Without you, this trial doesn't happen. Just as Ted Baker, in his inaugural running at Chinquapin, there is room for improvement. It takes years to learn the nuances that each course provides. The future looks bright for continued Championships at the McBride Hereford Ranch with the Columbia River Field Trial Club.
Judges: Brandy Gilmore and Alexander Rickert
PACIFIC NORTHWEST OPEN SHOOTING DOG CHAMPIONSHIP [One-Hour Heats] - 8 Pointers and 3 Setters
Winner-MILLER'S NEWEST VERSION, 1696284, pointer female, by Miller's Upgraded Version-Miller's Special Edition. William Owen, owner and handler.
Runner-Up-MAUCK'S WYEAST OWYHEE DALLEE, 1687695, setter female, by T's Gunslinger-Hidden Jasmine. Alex Mauck, owner and handler.
Judges: Matthew Huston and Alex Rickert
OPEN DERBY - 6 Pointers and 2 Setters
1st-MAUCK'S WYEAST MOLLY, 1699454, setter female, by P W Sunrise-High Prairie Gypsy. Alex Mauck, owner and handler.
2d-PERKINS DIAMOND CUTTER, 1698024, pointer male, by Touch's Diamante-Perkins Trace of Snow. Christopher Perkins, owner and handler.
3d-WEST MOUNTAIN SPEED WAVE, 1695027, pointer female, by Lester's Shockwave-Lester's Speed Lady. Kim Sampson, owner; Rich Heaton, handler. 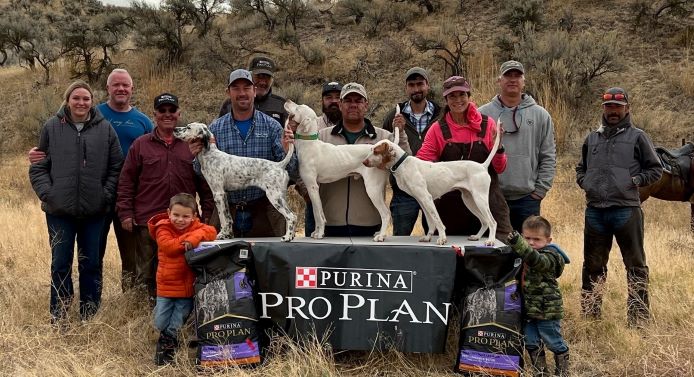