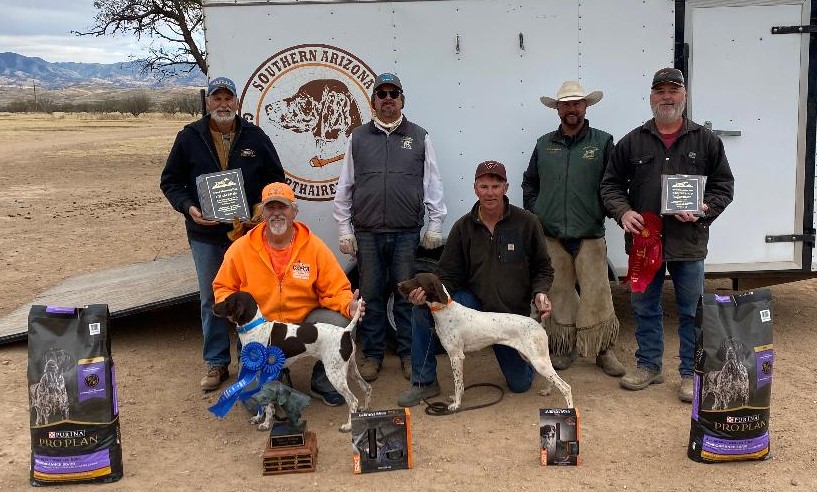 NGSPA Region 12 Open Shooting Dog Championship Winners. From left: Aunt Troji's Dirty Nike with Larry Metter and Dunfur's Wings of An Angel with Dave Fowler. Behind are the judges and trial officials.

The trial was dual sanctioned with both the AKC and the American Field. It was a well-attended event with 104 entries by over 22 different exhibitors showcasing their skills in this year's stakes. The trial culminated with a running of the NGSPA Region 12 Open Shooting Dog Championship that also served as an AKC Grand Open Limited Gun Dog Stake.

The club would also like to thank the following pros for attending this year's event: Terry Chandler, Todd Yamamoto, and Dan Hoke. Without their participation, the trial could not happen.

Another thanks to bird man Dave Hackman (who provided 250 chukar and 150 quail). Lee Holsinger, Dan Hoke, and Clint Matthews acted as official gunners. Lee Holsinger and Nick Besenick were always on time, providing birds to the bird planters.

Purina supported the trial with 600 lbs. of Purina Pro-Plan dog food. This year Annamaria Marchionne, Clay and Jake Matthews, Nick Besenick, and Lee Holsinger were instrumental in planting birds. Pete Wagner was again maybe the most important person on the crew acting as the trial coordinator. This year he performed an exceptional job making up for "uh oh's" along the way, while still getting the trial done a day early.

The Region 12 Championship was the premier stake at this year's trial. Mick Cheshire and Terry Chandler happily rode in the judges' saddles and rendered their opinion of how a class shooting dog should perform. The winner also will be recognized on the Bob Deitering Memorial Trophy that is kept at Sandy Deitering's home in Elfrida, Ariz. Jim Morehouse donated SportDog training collars to this year's winners.